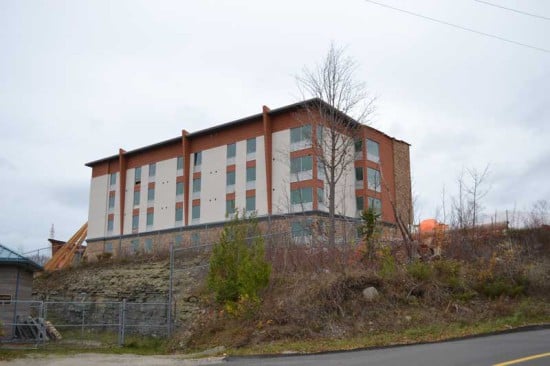 LITTLE CURRENT—The first Little Current hotel in over a 100-years, since the Huron House, built in 1906 (which burned in a fire in 1949), is nearing completion. “Construction of the new Manitoulin Hotel and Conference Centre being built in Little Current is now 75 percent compete,” was how Great Spirit Circle Trail (GSCT) manager Kevin Eshkawkogan described the current status of the new hotel in an interview with The Expositor last week. The GSCT is the organization representing the consortium of area First Nations that are building the new facility.

The $10.8 million project has been three years in the making after the GSCT identified a gap in the Manitoulin tourism industry and developed the project to grow tourism for not just First Nations, but for the region as a whole.

Construction of the 58-room, 300-person conference centre and hotel began in June of 2011 with a one-year construction schedule but was pushed back due to changes such as the addition of geothermal and financing delays.

“It’s a complex business deal whenever you have seven different partners,” explained Mr. Eshkawkogan. “It has been a challenge for everyone in terms of working together to have all the funding in place. However, a couple of weeks ago, we received final approval on one of the funding elements we were waiting on and now all the pieces of the financing puzzle are in place to finish the project. We are predicting another three months of solid construction until the hotel’s completion.”

Last Friday, The Expositor had the opportunity to meet with Mr. Eshkawkogan and tour the site of the new hotel and see first hand how the new facility is progressing.

“Of the 58 rooms, four are corner suites,” said Mr. Eshkawkogan as he led The Expositor to one of the suites on the northeastern corner of the hotel.

The large room with windows overlooking the North Channel will have a small kitchenette, living room area and feature a king size bed. In addition to the four suites, seven of the rooms will also be wheelchair friendly, featuring larger bathrooms and also larger sized rooms, which Mr. Eshkawkogan explained will be designed to double as business suites.

“We had no responses to the first request for proposal (RFP) for the restaurant, so we’ve now gone ahead and equipped the kitchen and designed the restaurant so that, essentially, someone can come in and just start cooking,” explained Mr. Eshkawkogan. “We are preparing to retender the restaurant space and are including not only a fully designed restaurant and equipped kitchen but we are now offering whoever is selected from the RFP process exclusive catering rights to any events occurring at the facility and room service as well.”

A spa was also in the initial plans for the facility. However, Mr. Eshkawkogan reported that they did not receive any responses from that RFP process either, but this space will not be retendered.

“The 1,500 square foot space originally built for the spa, which would have overlooked the pool, will now be used as an area for cocktail parties, retirement gatherings or birthday parties,” Mr. Eshkawkogan told The Expositor.

When asked if a spa could still be in the hotel’s future, Mr. Eshkawkogan said it was possible, but was not in the plan for the time being.

The most unique feature of the facility is the large teepee-structured lobby. Huge pillars form a circle, which will continue from the main floor down to the ground floor. In the centre will be another pillar with a fireplace. On both the lobby and ground level, the teepee will have floor to ceiling windows. The lobby space will serve as a sitting area and place for people to congregate, while below, the 1,500 square foot space originally built for the spa will overlook the pool which curves around the teepee structure.

“The teepee design has a great deal of cultural significance,” Mr. Eshkawkogan explained. “The seven pillars represent the seven grandfather teachings. It is said that it takes your whole life to learn the six teachings in order to understand the seventh and the way the structure is designed represents this element as does the fire which some believe is the doorway to the spirit world.”

As Mr. Eshkawkogan led The Expositor out into the front of the hotel, he described the 36, 400-foot deep holes that were drilled into the rock underneath what will eventually be the parking lot. They are the ground-source for the heating and cooling for the hotel’s geothermal system.

“All the common areas will be heated and cooled using geothermal,” Mr. Eshkawkogan explained. “This includes the corridors, main lobby and pretty much any other common area. We are estimating a six to 10-year payback, but it is very much weather dependent.”

Besides the geothermal, Mr. Eshkawkogan said that the hotel has tried to choose green options wherever their budget would allow, keeping in line with First Nations commitment to the protection of Mother Nature. He even revealed that in the future, the hotel hopes to incorporate solar energy through roof panels.

As construction is moving full steam ahead, the GSCT has been busy organizing administrative elements such as collecting resumes, offering hospitality training and promoting the new facility.

“Pacrim Hospitality will be overseeing all operations of the hotel and we will be hiring a general manager shortly,” said Mr. Eshkawkogan. “Though there will be a management company, the company will report to a board of directors made up of representatives from the seven project partners.”

“Representatives from the GSCT have been promoting the Manitoulin Hotel and Conference centre at various trade shows,” continued Mr. Eshkawkogan. “The new facility will reach two new primary markets—government agencies and private sector organizations looking for a host conference space and a place to host group tours through bus tours and motor coaches. These are new markets to the Island and we purposely built the facility not to be able to accommodate everyone but with the idea of spreading out the business to area motels, lakeside resorts and bed and breakfasts.”

Besides the economic benefits to business in the hospitality and restaurant industry, Mr. Eshkawkogan said Island businesses of all kinds will benefit from the economic impacts the new facility will bring.

“The benefits of the facility are nothing but positive,” added Mr. Eshkawkogan. “We are anticipating 25 positions at the facility, plus a spinoff of another 15 possible jobs. We are keeping the jobs here on the Island and creating positive employment opportunities.”

The hotel is expected to be complete in the early New Year. For more information about the GCST or to apply for a position at the hotel, visit www.circletrail.com.