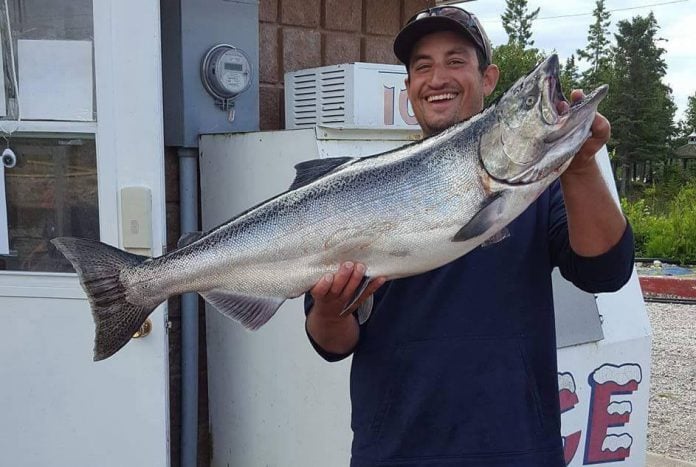 MANITOULIN—There is a new leader at the top of the standings in the Manitoulin Expositor Salmon Classic (MESC) derby.

“The salmon fishing has been better this year than the years past in my recent memory; not 1990s good, but good nonetheless,” said Mr. Patterson. “Lots of salmon are being caught but the ‘big’ ones have eluded us.”

Mr. Patterson explained that Moe Gauthier of Screamin Rebels took a 25-plus pound fish a week before the MESC start, then again last week another big salmon was taken (however this person did not have a derby ticket). “I bagged a 21-pound salmon the Wednesday before the Classic but have been virtually shut out since.”

“Thanks to Jesse we now know that the big ones are still about and the next three weeks is going to be fun,” said Mr. Patterson. He predicted it will take a fish 20 pounds in size to finish in the top 10 and suggested a 28-pound fish will win it.

On the Salmon Classic leader board, Jesse Cundari leads the way with his catch of 22.43 pounds on August 7 in South Baymouth. Brady Dearing of Gore Bay is second with a catch of 16.44 pounds, July 30, at South Baymouth, while third place thus far belongs to Raymond Desbois of 16.32 pounds, caught on August 7 at Providence Bay.

Mr. Patterson pointed out both Michael’s Bay and Providence Bay are holding fish in tight. Early morning and late night are the best times. Twenty-foot or over 30 to 40 feet of water levels has produced some nice fish. And to catch these fish purple, as usual, is a solid colour choice (for a lure). Purple Thunder, Chicken Wing and melon colours are also performing well. In the bays be sure to bring your favourite plugs, he reminded everyone.

Expositor Staff - September 22, 2021
SPRING BAY - The skirl of martial pipes rang out across the grounds of the Manitoulin District Cenotaph and Memorial Gardens, located at Monument...

Expositor Staff - September 22, 2021
WHITEFISH RIVER - The Whitefish River First Nation and Health Sciences North (HSN) communities are mourning the loss of one of their own. The HSN...