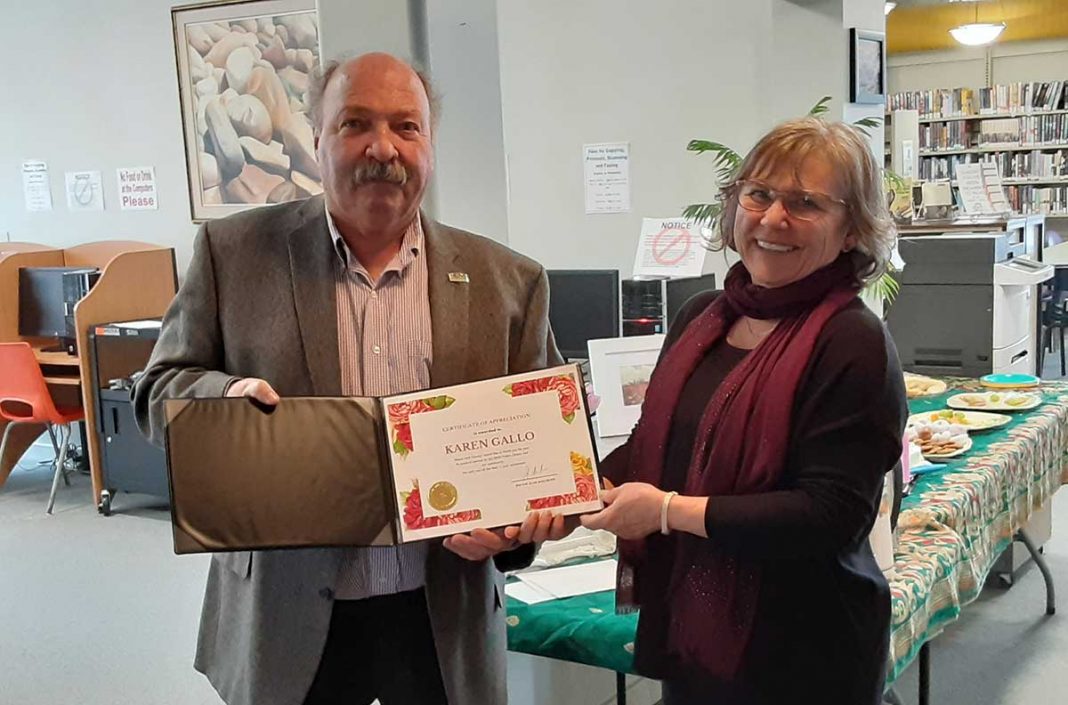 LITTLE CURRENT – The Northeast Town Public Library has a new CEO at the helm as outgoing head librarian Karen Gallo transferred control to new leader Kathy Berry on Wednesday, March 18, five days after a small retirement celebration at the library.

“It was really enjoyable working here and I’m going to miss everybody,” said Ms. Gallo.

She worked at the library for 11 years, beginning in 2009 as a library assistant and advancing to the head librarian and CEO role in 2017. In that time the library has refreshed its inner components such as seating and has expanded the programming it offers to the public.

“This community has been very welcoming, inviting and they made it easy and rewarding to work here. It was an honour and privilege to be able to serve them,” she said.

The rest of the staff is continuing in their roles and Ms. Gallo said the library had the people it needs to continue advancing its offerings.

“This has been a great chapter in my life and now it’s on to the next,” she said.

Northeast Town Councillor Laurie Cook, who serves on the board of the library as the council representative, thanked Ms. Gallo for her service and commended her on her work to improve the library’s presence within the community. She presented Ms. Gallo with two pieces of art as a send-off gift.

“I can speak for the entire board when I tell you how pleased we have been with Karen’s enthusiasm and success over the last three years,” said library board chair Ned Martin in a statement read by board member Paula Hooper. “Throughout all her time here, Karen has been able to exercise her significant abilities in dealing with people. Her positive attitude and big warm smile make our library a welcoming place for patrons, adults and children alike.”

The library’s longest-serving staff member Angela Cosby, who has worked there for 16 years, said Ms. Gallo was always easy to talk with, a quick learner, creative and gifted with a warm, inviting personality.

Ms. Berry, the incoming librarian, said the news that she was getting the position brought much joy to her whole family.

“It was really exciting; my kids were excited too. We’ve used the library since we moved here about six years ago and it was a great hub to meet people,” said Ms. Berry.

She is returning to the workforce after an absence of about eight years. Her background is in the non-profit sector providing support to victims of sexual assault and domestic violence and homeless individuals, working in a shelter, legal advocacy and outreach work.

Ms. Berry’s experience in crisis intervention and emergency management planning was immediately tested as her position began just as the COVID-19 impact was starting to be felt strongly in Ontario. The library announced it would be closing just before the province declared a state of emergency and requiring all libraries to shut down.

She quickly prepared a work plan for the downtime and set about informing the staff, the public and the board about some of the changes that would be enacted because of the circumstances. The library remains temporarily closed indefinitely as long as the state of emergency is in effect.

Ms. Berry also has plenty of longer-term goals for the facility, partly informed by her positive experiences at the library with her four young children who range from seven to 12 years old.

“I would like to build more volunteer involvement because the library can get pretty busy and we could use some support,” she said. She will also be devising new and innovative programming to cater to a wider array of patrons.

“It’s easy to see that Karen created a welcoming environment and has great staff in place. The library is in good shape and I’m going to keep working forward for continuous improvement,” she said.