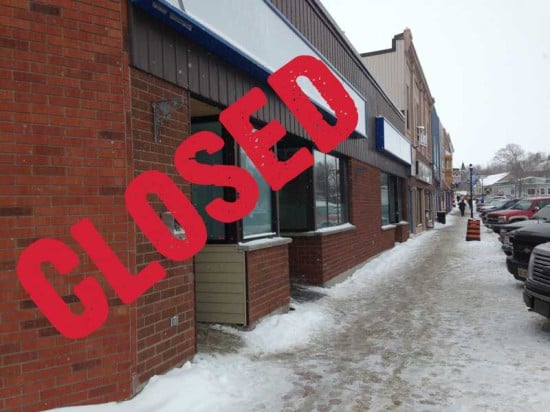 MANITOULIN—Last week the Northeast Town council passed proposed amendments to the town’s commercial and residential zoning bylaw to limit the placement of future clinics (prompted by recent methadone clinic problems) in the municipality, despite a letter warning against “people zoning” from the Ontario Human Rights Commission (OHRC).

Last month, the Northeast Town council proposed amendments to the current commercial and residential zoning bylaw to change the definition of a business or professional office to “an office in which any business is carried on or any profession is practiced but does not include a home occupation or a clinic” and limiting the placement of a clinic to “the same property as a hospital or home for the aged.”

A public meeting to discuss the proposed amendments was held prior to last Tuesday’s Northeast Town council meeting.

Members of the Northeast Manitoulin Family Health Team (FHT) were present for the meeting and asked council a series of questions, concerned at the effect the bylaw amendments would have on the placement of future clinics.

To the first question town CAO David Williamson responded, “Are they directly related? No.”

“The closure of the methadone clinic had nothing to do with council,” added Mr. Williamson.

Mr. Williamson indicated that the notice given to the owner of the property where the clinic was located was strictly an administrative response to violations under the town’s nuisance bylaw.

Despite this statement, discussions at past council meetings indicated that the reason for the bylaw amendments was to control the location of future clinics, specifically methadone clinics.

At the January 8 meeting of council, council was informed by town staff that the owners of the 19A Water Street Clinic, the Robinson’s Pharmacy Group, had been contacted by the Northeast Town, informing them that they must stop dispensing methadone within 30 days at that location (19A Water Street) or the company would be charged with nuisance under the municipality’s bylaw act. This notice led the company to evict Dr. Bryan Dressler and his methadone clinic, which shut its doors Friday, February 15, after an additional 15 day extension.

“We all understand that people need treatment and we’ve tried to work with the clinic operators to try and find a more suitable location in the past, but this is simply not a good location,” stated Northeast Town Mayor Al MacNevin, adding that the location had not been suitable due to fights on the downtown street involving clients of the clinic, theft in downtown businesses allegedly by clients, and other problems. “We need to have some kind of control to help have a say in where these (methadone clinics) buildings are allowed. I’ve asked staff to look into amending the commercial bylaw.”

The bylaw notice to the Robinson Pharmacy Group, and its subsequent closure, in addition to the proposed zoning bylaw amendments, led to a letter from the OHRC warning the Northeast Town against ‘people zoning.’

“Any amendment the town considers making to its zoning bylaws must not ‘people zone’,” states the OHRC. “Zoning decisions must not violate the Code (Ontario Human Rights Code) and bylaws should neither target, nor have a discriminatory impact, on people with addictions. There needs to be a genuine planning purpose for all decisions, and the town should work to ensure that the needs of people with addictions are accommodated in any planning changes it makes.”

The OHRC also writes that it “questions whether the town has established a causal link between providing methadone services and the events described (the disturbances that led to the clinic breaching the public nuisance bylaw 2002-31).”

The OHRC states that the proposed actions of directing the clinic to cease dispensing methadone at the Little Current clinic location due to the bylaw breach and the proposed amendments to the town’s commercial and residential zoning bylaw to limit the locations of medical clinics, “raise significant human rights issues with us and we urge you to reconsider.” (The letter can be read in its entirety on our website, www.manitoulin.ca).

To the second question from Ms. Miller regarding the effect of the proposed bylaw amendments to the location of future clinics, Mr. Williamson responded, “Yes, but the bylaw amendment does not preclude a site specific variance.”

Mr. Williamson indicated that the bylaw change would give council and the public the opportunity to give input through the site-specific variance process, which includes the holding of public meetings.

Ms. Miller brought up the example of Little Current Medical Associates determining that an aromatherapy clinic would be beneficial to their clients.

Mr. Williamson pointed out that reaching out to the medical community, the hospital or the Manor would be the first order in that scenario.

The next to speak was Manitoulin Health Centre Chief of Staff Dr. Stephen Cooper.

Dr. Cooper asked what criteria was used to decide on the changes to the amendments to the bylaw.

He indicated that reports from the planning board and from municipal staff are considered as well as public input.

“Council’s focus is on planning and land use,” the CAO added.

“The methadone clinic is a totally different issue,” continued Mr. Williamson, indicating again that the closure of the 19A Water Street Clinic was linked to the creation of a public nuisance. “That nuisance had to stop.”

As to the criteria under which a site-specific zoning amendment would be supported by the municipality, Mr. Williamson replied, “every location is unique” and would require examination of the merits of diverging from the zoning bylaw.

Ms. Miller inquired about existing clinics citing the Canadian National Institute for the Blind Eye Van as an example.

Mr. Williamson said those clinics that are preexisting to the bylaw would be ‘grandfathered.’

Later during the council meeting, and following the public meeting, council carried a motion to approve the proposed amendments to the zoning bylaw.

Under the planning act, the zoning amendment can be appealed within 20 days of the decision (by Monday, March 11) to the Ontario Municipal Board.

Prompted by the Northeast Town’s recent action, the Township of Assigniack passed an interim bylaw at their council meeting last Tuesday, “being a bylaw of the Corporation of the Township of Assiginack to impose interim controls in order to prohibit the establishment of new methadone clinics (a medical, dental or other professional office that dispenses methadone) and dispensaries (a business selling or filling methadone prescriptions for customers as the primary activity of the business, but excludes a pharmacy or a pharmacy that is accessory and ancillary to a medical clinic or hospital) for an interim period of six months in order to allow for the completion of a planning study on the potential regulation of these uses.”

“We looked at the wording of our zoning bylaw, which was written in the early ‘80s, and rather than reinvent the wheel council decided to pass this interim bylaw, similar to the bylaw passed in London (in regards to methadone clinics),” Assiginack clerk Alton Hobbs explained. “Council is not opposed to having them, but rather where they are located.”

Staff will undertake the six-month study.