LITTLE CURRENT—Competitors, coaches and curling officials taking part in the opening ceremonies of the 2018 Travelers Northern Ontario Curling Association (NOCA) Men’s Provincial Championship filed into a Little Current arena that had been transformed into a championship curling venue. The weekend that followed provided plenty of tense excitement, but in the end it was the Jacobs Rink that prevailed in the last end of the Sunday night final. (See coverage of the play on this week’s Section Front.)

The procession of curlers and organizers lined up along the side of the centre sheet facing the stands for the opening remarks.

Region 4 Northern Ontario Curling Association executive board member Joan Sheppard welcomed the crowd. “The host committee has been working very hard to ensure that the competition will enjoyable for all of you,” said Ms. Sheppard, “and to ensure most of all a great event.”

“On behalf of the Little Current Curling Club I would like to welcome you to the 2018 NOCA Men’s Provincial Curling playdown,” said Little Current Curling Club president Joe Cooper. “It is very exciting for our club to be involved with hosting this very important curling event. We would also like to thank the township of NEMI and as well as all the clubs (hockey and figure skating) that have had to postpone their activities for a week while the arena ice surface is transformed into a curling surface. Without you, this event would not be possible.”

Mr. Cooper also noted that his club was very excited to have one of their own, the Jordan Chandler rink, representing their club on the ice.

“It is my pleasure to welcome you to the 2018 Travelers Northern Ontario Men’s Curling Championship,” said Mayor Al MacNiven. “Our community and council is proud to support the volunteers that worked so hard to make all this happen.” 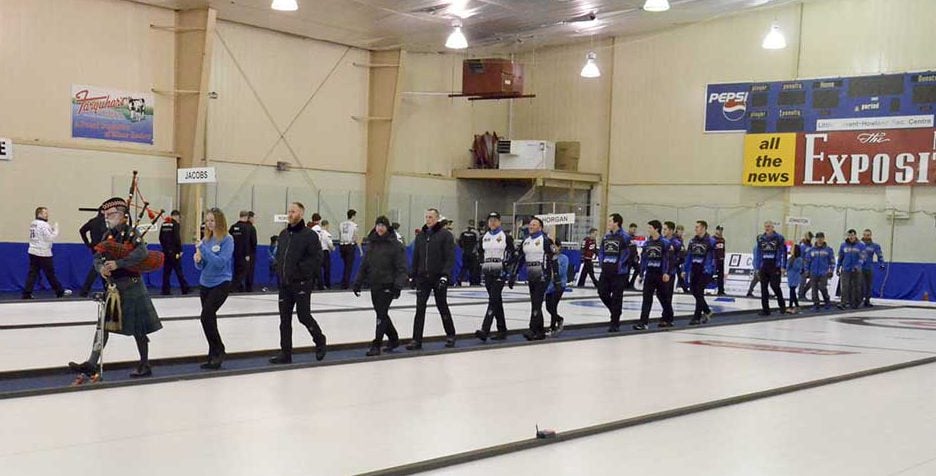 The MSO team threw out the first rock, an honour awarded to Regan Millsap.

“They were very excited,” said Ms. Holroyd. “It was quite an honour for them and they got to meet all the teams.” The MSO team will be travelling to Sault Ste. Marie in March to compete in the regional playdowns and if successful there they will go on to the provincials next year and then the nationals the year after. “It is a four-year cycle,” said Ms. Holroyd.

Following an intense weekend of top calibre competition in which the Horgan rink came through undefeated only to fall to the experienced veterans of Team Jacobs in the final, the closing ceremonies still played to packed stands.

In fact, the stands were standing room only for every round of the competition. Of course it helped that the hometown favourites Team Chandler remained in contention throughout the championships, also falling in a tight semi-final game to the Team Jacobs veterans. There was no mistaking the local favourites going by the cheers that met each well-played Chandler rock. Of course this is that most Canadian of sports, curling, so polite applause also greeted the opponents’ plays as well.

When it came to the finals, however, the cheers were heartfelt and enthusiastic for both sides.

Skip Brad Jacobs was magnanimous in victory, commending his opponents play and noting that “there is no better preparation for the Tim Horton Brier for us.” The calibre of play was evident in the tight run the Jacobs rink faced through the competition, losing earlier in the weekend to the Horgan rink, who got the bye into the finals.

“That Horgan rink gave us everything we could handle and more,” he said. “This is exactly what our team needed going into the Brier.” In fact, Tanner Horgan is now listed as the alternate (or fifth team member) for the Jacobs team going into the Tim Horton’s Brier taking place the weekend of March 2 in Regina.

Mr. Jacobs also had high praise for the Little Current Curling Club, the event organizers and, especially the fans who filled the stands throughout the weekend. “It is the volunteers who make this possible,” he said. “We play in a lot of events, provincials. You guys are unbelievable. Thank you very much for coming out. This is a better crowd than many of the grand slams we play in.”

It’s interesting to note that Tanner Horgan, who skipped a rink that defeated all of the other rinks  participating in the tournament  during round-robin play and lost the championship at the very end of the tenth end in the championship game, is just 19 years old. His brother (and his vice-skip,)  Jacob Horgan is just 17 and the other team members are of similar ages. We can look forward to much success from this team and it’s good to see that Brad Jacobs has incorporated the young skip into his team as the ‘fifth member’ for the Brier in what looks very much like a mentoring move. Nice to see.