MANITOULIN – Ontario needs clean energy and while nuclear power is a source of clean energy, it remains a divisive issue. Currently, nuclear provides 60 percent of our electricity, followed by hydro at 26 percent, with wind, natural gas, solar, biomass and petroleum making up the balance. From a greenhouse (GHG) and air quality perspective, nuclear power is very clean. Once construction is complete nuclear is a zero-emission technology.

The Province of Ontario has committed to reducing emissions to 30 percent below 2005 levels by 2030, a target that aligns with Canada’s Paris Agreement commitment. Ontario’s GHG emissions have declined 12 percent since 1990 and are the second lowest in Canada. Transportation, industry and buildings are the largest emitting sectors. Ontario’s electricity sector emitted three percent of the total Canadian GHG emissions attributed to power generation. Ontario GHG emissions from power generation peaked in 2000 and declined from 2005 to 2014 as coal-fired generators were phased out.

Because ours is a natural resources-based economy there are parts that are hard to decarbonize: oil and gas, many industries and big transportation, said John Gorman, president and CEO of the Canadian Nuclear Association (CNA). “They are all relevant to Canada and part of the challenge is how to meet GHG reduction targets. Nuclear can help us do that.”

It was nuclear energy that enabled Ontario to phase out coal plants, he added, and that made the biggest difference North America-wide. “It’s something we should be proud of.”

Prior to joining the CNA, Mr. Gorman was president and CEO of the Canadian Solar Industries Association. He joined the CNA to align his work days with his personal beliefs. Mr. Gorman serves as Canada’s designate to the International Energy Agency and sits on the executive council of the Canadian Council on Renewable Energy. He was awarded the designation of Climate Project Ambassador by Al Gore in 2008.

“The reason that I switched to the nuclear sector was the realization that we’re not making progress quickly enough in terms of decarbonation,” he said. “Electricity is my thing. Despite the amazing growth of low cost wind and solar over the past 20 years the amount of clean, non-emitting energy has not changed. That’s really alarming. We don’t have another 20 years to make progress.”

Ontario’s aging nuclear infrastructure (Bruce and Darlington locations) is currently being refurbished. The 10-year project is on time and on budget, according to Mr. Gorman. The Pickering Nuclear Generating Station (NGS) is scheduled to end commercial operations by the end of 2024, although Ontario has supported Ontario Power Generation’s application to extend that to 2025. The province issued an alert in January of this year after human error resulted in a false alarm at the Pickering NGS, revealing systemic issues with Emergency Management Ontario and stirring up concerns about nuclear safety.

All nuclear power plants in Canada use the CANDU design. The retrofit for a CANDU plan basically makes them an entirely new reactor, explained Richard Carlson, director of Energy Policy and Energy Exchange at Pollution Probe. The infrastructure will be the same, as are the grid connections, but the reactors themselves are completely redone. “From that point of view, it would be as safe as any CANDU reactor,” he said.

The reactors have proven safe and the technology has been exported around the world, generally without any problems. In the 1990s there were some safety concerns the reactors were shut down under Ontario Hydro. In Canada currently there is a reactor in New Brunswick and there are the ones in Ontario. There are always safety concerns when working with nuclear but Ontario has managed to be quite safe about it, Mr. Carlson said. There have not been any emergencies or problems. The low number of accidents around the world shows nuclear to be a relatively safe technology. “Of course, when things go bad they really go bad. But they rarely go bad, which is good,” he said.

Canada has a more than 60-year record of not having incidents, said Mr. Gorman. “Canada has one of the best global reputations for having safe nuclear energy. Canada has excelled at doing this thing properly.”

Mr. Gorman acknowledged that there have been serious nuclear incidents globally that caused deaths but says these were unfortunate events that have added to the stigma of nuclear energy. He noted that Chernobyl is nothing like the technology and practices used in the world today.

“Ontario has invested a lot in nuclear power and nuclear does produce clean energy so we don’t want to lose our investment,” Mr. Gorman said. “The Bruce and Darlington project is a $26 billion project.”

When you look at nuclear from a lifecycle basis, lifecycle emissions are less than solar and water and are equal to wind farms, said Mr. Gorman. Not only does it not create emissions, but over entire lifecycles nuclear has less emissions than other sources.

Ontario doesn’t need any more gas plants, Mr. Carlson said. What is needed is to transition energy systems away from fossil fuels and that includes natural gas for electricity generation. Ontario’s grid is very clean at the moment, sitting around 90 to 95 percent clean depending on the year. The five to 10 percent is natural gas. “A natural gas plant can be turned off and on very quickly. When there is peak demand on hot summer days they are turned on. Generally speaking, the gas plants aren’t running that often.” In Ontario, it’s primarily during peak air conditioning demand.

It’s important to think of the electricity system as a system. Nuclear plays a big role but having a 100 percent nuclear system would be very expensive and difficult to manage. Wind and solar can play a role. While they both work well and are low cost, the power they provide is intermittent. They have to be partnered with something that can provide power most of the day. Nuclear is able to replace coal and gas plants by being a good partner to renewables.

What about hydro electricity? The Adam Beck hydro generation station near Niagara Falls has been running for over 100 years. It does require some maintenance but once it’s built, it’s built and you have cheap electricity, he said. “But we don’t have much of that in Ontario. Ontario is relatively flat. We don’t have that ability like Quebec or Manitoba or British Columbia to have really large hydro power. We’re kind of stuck. Nuclear power is a little more expensive but you do what you can.”

The issue that’s not talked about much is nuclear waste and it can’t just be wished away, he said. “It’s going to be a problem and it’s not one we’ve solved. There’s no perfect solution. Every energy source has trade-offs. Nuclear is clean. It’s reliable. It’s big, which helps out. But there is a safety concern and there is a waste issue. Waste is something we need to get a handle on. It is a big problem. The waste is going to be with us for a thousand years.”

As reported previously in The Expositor, the Nuclear Waste Management Organization (NWMO) is currently undertaking engineering studies at two locations in Ontario (Ignace and South Bruce) to determine an appropriate site for a deep geological repository (DGR) that would safely and securely contain spent nuclear fuel. There are currently no DGRs in North America but there has been a repository located 50 metres under the Baltic seabed in Sweden since 1992. NWMO is trying hard to deal with community concerns and trying to find a willing community. When the Pickering reactor shuts down the used fuel will be stored on site for several years so it’s not an immediate issue but does need consideration. “Ontario has benefited from nuclear for the last 40 years so it’s our responsibility to deal with it now regardless of whether there’s going to be more or less nuclear in the future,” said Mr. Carlson.

Anishinabek Nation Grand Council Chief Glen Hare has long agreed nuclear waste is problematic. “It’s poison,” he said, adding that he wants to be part of the solution. “I don’t know what that is. We have ideas. Let’s share these ideas.”

Keeping the repository away from the Great Lakes, or any water body, is his most important recommendation. “If they’re going to bury it and we have no choice then it has to be buried at least 100 miles from the shores of the Great Lakes and they have to keep an eye on it. Even that is not a guarantee but if they have to do something that is one recommendation I would put forth. One hundred miles from any shoreline.”

Grand Council Chief Hare’s elders once told him to look at the rock cuts to see the water coming through. “That’s how strong that liquid is. It can go through a rock. It’s natural. All it has to do is accumulate and it will crack open. That’s why I say there’s no guarantee.”

Grand Chief Hare doesn’t believe the DGR proponents are taking all the steps that should be explored. He feels there is a lack of education. “Give us the resources,” he said. “We need to know what are the dangers? What are the pros and cons? Then let the people vote. Let the people give the direction here. There are still opportunities, because it’s got to go somewhere. Invite us to the table.”

The chief is trying to secure funding so he can provide resources to members of his communities. “It’s not just a First Nations issue, though,” he said. “It’s not Ontario’s issue, or Canada’s. It’s all of ours.”

“We’re ruining Mother Earth,” Grand Council Chief Hare continued. “The lands, the animals, the bush. They’re just going to go and plop this in the middle? To the people that are doing this now, think of your children and the future.”

“What is 500 years? Even now, we look at things that happened 2,000 years ago. Five-hundred years only seems like five years compared to some of the history we’re referring to right now. Don’t think of yourself right now because our days our numbered. Look at the future. It’s our grandchildren that are going to have to live with this down the road. Not me, not us. Is this what you want to leave them?”

He is passionate on this topic. “I’m just getting started,” he said. “I want to do more.”

It’s understandable that there is a lot of concern about nuclear waste being stored in someone’s back yard, in pristine wilderness or nearby to precious, clean water. In a perfect world this would have been dealt with at the beginning, said Mr. Carlson. “But it wasn’t, and now we have to figure out what we’re going to do.” 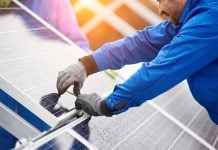 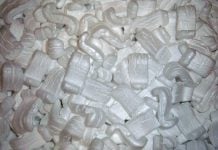 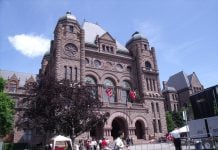