TEHKUMMAH – It has now been 10 years since Tehkummah’s Gordon’s Park Eco Resort received its status as a Royal Astronomical Society of Canada (RASC)-recognized dark sky preserve, a call to all astronomical enthusiasts that the property offers some of the country’s darkest accessible skies for their stargazing pleasure.

“It’s attracted a lot more people and astronomers for sure. We’re one of the darkest skies in Ontario; it’s a huge attraction for people wanting to stargaze without the light pollution of the city,” said Gordon’s Park marketing co-ordinator and staff supervisor Alexandria Hahn.

At the 2009 Manitoulin Star Party, a special ceremony took place with local politicians, a representative from the RASC and stargazer regulars such as ‘Island astronomer’ John Albers who served as emcee. The Expositor reported on the occasion when proprietors Rita and Terry Gordon shared their thoughts on the designation.

“We could not have done this without all those who are present and those who are not,” Ms. Gordon said, adding that it was “very important to Terry and I that we are a designated dark sky sanctuary. I also want to thank Terry who is the hard-working man behind it all.”

According to reports from a decade ago, people from as far as Indiana and Pennsylvania were present at Gordon’s Park when they received their designation.

“Thank you for witnessing this moment; it is very special to us,” said Ms. Gordon. “As long as we have Gordon’s Park, this will be available to you.”

The team at Gordon’s Park takes special provisions to ensure the darkest possible conditions are available for their stargazers. No white lights or campfires are permitted in the dark sky preserve; all must use a red filter on any lights to minimize the amount of light pollution at the site.

The Gordons have created a wide variety of activities for those to experience the darkness in its fullest glory. Every Thursday and Saturday in July and August they host an astronomy night for attendees to look through telescopes and wide-angle binoculars.

“You’re able to see Jupiter, Saturn, look at the moon if it’s out, and also get a laser-guided sky tour of the Milky Way. You’ll learn how to sky-hop using your hands and use a planisphere,” said Ms. Hahn.

On Fridays in July and August, they offer a stargazing night hike which offers a more immersive nighttime experience. This is a new activity for 2019.

“It goes along one of our hiking trails. We get to listen and learn about some of the animals in our forest, and during one part on the trail you stop and get a laser-guided tour of the sky and look for key constellations,” Ms. Hahn said.

Twice per season they host star parties: Stargazing Manitoulin at the end of June and a Perseids Meteor Party which took place this past weekend during the Perseids meteor shower. They also host aurora borealis weekends in late May and early September with a new-for-2019 addition of aurora photography workshops on the Sunday of each weekend.

“It really helps, being able to say we’re a dark sky preserve and having certificates proving it. It definitely helps our business; we can say we’ve gone through the process of getting tested to get that designation,” said Ms. Hahn.

Full information about the astronomical offerings at Gordon’s Park can be found at its website, GordonsPark.com, or by calling 705-859-2470.

“It should definitely be on your bucket list to come here and experience the preserve we have. It’s just breathtaking, seeing all the stars in the sky,” Ms. Hahn said. 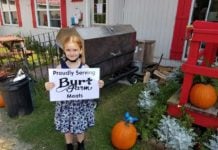