with files from Tom Sasvari

M’CHIGEENG – While the United Manitoulin Island Transit (UMIT) committee met several times recently and also held a conference call to have buses running in the early new year, the Recorder has confirmed that Ontario Northland is ceasing its current motor coach service to more than 12 communities on the Island, with the final run to take place November 15.

Speaking with the committee October 14 were Ontario Co-operation Council (OCC) members Paula Haapanen, the Northern Ontario manager of operations, and OCC executive director Julien Geremie. Ms. Haapanen stated that the plan is a four-year pilot project and said that there is lots of room for discovery for potential groups and that a strategy would have to be created on how to communicate with the target groups. She recommended, for example, a graphic artist create the transit logo as OCC will not do this. Central Manitoulin council representative Steve Shaffer took issue with this, as he said that when Nathalie, the original spokesperson for OCC, spoke with the committee, she said that OCC would do the business plan and marketing. Ms. Haapanen then said that “we could recommend places to advertise.”

March of Dimes Canada representative and transit initiator Guy Dumas then told the committee that Central Manitoulin is on the service side of the equation and that they will become a co-operative member. He will talk with Central Manitoulin CAO/clerk Ruth Frawley to see what procedures exist, if any, to access the bridge funding that the municipality holds, to get work started and to get the UMIT bank account opened.

To this, Mr. Geremie stated that the OCC would ask for 25 percent at the start of its contract but could be flexible. He also said that “once the corporation is in place and the bylaws established, OCC can work with you. It is a pleasure to work with community builders such as you are.”

Mr. Shaffer spelled out that “Guy has to sit down with Ruth regarding the funds, to determine how the funds are going to flow. Ruth has a clear understanding of how the money should be used. Central Manitoulin waived their normal procedure re: the tendering process. Central Manitoulin is jumping over hoops to make sure there is no barrier to implementation.”

Ms. Haapanen reiterated once again that it is necessary for UMIT to incorporate, which takes a while, and that although the feasibility study had suggested a timeline of April, UMIT was now looking at January.

“I had been hoping for January,” Mr. Dumas replied. “I did consult with Wally Becks about the timeline. I am comfortable with going to the end of March, but would like to do a small test in January and full service with March as the final deadline.”

UMIT met the following day at Central Manitoulin council chambers with Ontario Northland Transportation Commission (ONTC) representatives including spokesperson Tracy MacPhee who is the director of passenger operations, and who told the committee “Ontario Northland pulls out in November.” She spoke of the low ridership on Manitoulin and proposed a successful program such as ONTC has where the bus stops in Spragge and then AJ Bus Lines takes people on to Elliot Lake. ONTC will be issuing a tender for a service provider to hook up with ONTC in Espanola for service to Little Current. “Based on ridership,” she said, “this is the best program going forward.”

Based on this information, then, Mr. Dumas said that UMIT will then have a start-up in Little Current and AJ Bus Lines will be the service provider to Espanola. He stated that the bus line is looking at three types of vehicles and will have two starting points, that being Gore Bay and Mindemoya, and will have two daily runs. This is tailored toward the responses from the survey that was done with 136 respondents.

Councillor Shaffer took issue with ONTC leaving the Island in the very near future.

“You are pulling out way too soon,” he said. “We have not been properly consulted as to other options open to us. There was significant ridership on the bus this past weekend. There should be a seamless transition from ridership to ridership. This is bad business practice and does not serve the Island properly. Wait at least until things are in place and then see what the synergies are.”

“Very few people know that we have a service. It has not been very well-publicized,” said Mr. Shaffer. “UMIT is relatively close. If you guys could tough it out until March, it would provide a seamless transition. You are throwing a monkey wrench into it by pulling out in November. My pitch to you is to pull out in March instead of a stopgap method for six months. UMIT is so close.”

Mr. Dumas also told ONTC that he was concerned with the upcoming change in the bus service, saying that it will cause problems in Wiikwemkoong. “They understood,” he said, “that ONTC was here for three years. Wiiky speaks very highly of ONTC because now they can hop on a bus and go to Toronto. The last word from Wiiky leaders was, ‘don’t leave us out.’

Ms. MacPhee responded by saying that funding has been decreased and there have been service cuts.

“If we had a true relationship from the beginning,” Mr. Dumas retorted, “we would be on the road now. There was no help from the government.”

Mr. Dumas stated that some changes had been made with OCC with the new person in place.

“The proposal to work with UMIT changed,” he said. “From a business plan and communications strategy to helping us fill out the contract.” Mr. Beck also noted that there has to be dialogue with OCC to make sure there is no overlap between his work and theirs.

“Wally has gone above and beyond the call of duty,” Mr. Dumas said. “I use him as a sounding board.”

Mr. Shaffer brought up the $10,000 that was to be paid to OCC for a business plan and for marketing. What is the price tag now?” he asked, and was told that it is not in yet, but OCC will not be doing a business plan.

Mr. Becks had some interesting news for UMIT. He had prepared the grant application for Central Manitoulin for transit. The local transportation grant for $500,000 was approved, but the $1.5 million grant for distance service was rejected because ONTC was already on the Island. “My gut feeling,” he said, “is that these grants will continue.” He also told the committee that as the service is implemented, there will be gas tax money coming in. “That comes to the co-operative to continue to expand the service as they see fit.”

There was concern expressed at this meeting that Gore Bay may be left out of the transit loop. Mr. Dumas reiterated that Mindemoya and Gore Bay are starting points and Ms. Roy said, “Further explore that Gore Bay will not be eliminated.” Different options will be explored with perhaps a taxi providing service from Gore Bay to hook up with the bus in M’Chigeeng and that feedback is needed from AJ Bus Lines, the transit service provider.

UMIT will also have to gather information concerning Wiikwemkoong as it was proposed that the bus only go as far as Manitowaning, but that First Nation had the highest ridership with ONTC. Again, the use of taxis was stressed. Mr. Dumas also emphasized that the long loop system done by ONTC would not be used by UMIT as it was too long for people.

The UMIT meeting held on November 5 saw the signatures required for incorporation received. The founding directors of the UMIT are Guy Dumas, KTEI student support counsellor Christine Sarbo, Angel Bus director Sandy Cook, Rose Shawanda and Mindemoya representative Betty Bardswich. Mr. Dumas will file the papers for incorporation and UMIT will continue to work on bylaws and will advertise for an executive director.

Renee Baker of Ontario Northland confirmed this past Wednesday, “ONTC service to communities on the Island will be discontinued.” However, she explained that the company is working with a taxi company to provide a ticketed connection for bus passengers arriving in Espanola, to connect to and be transported to Little Current by taxi. She added Ontario Northland will be providing an update on this later this week. 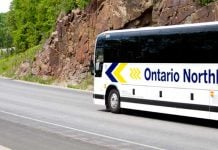 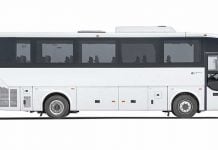 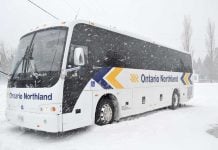 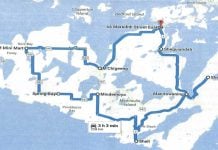