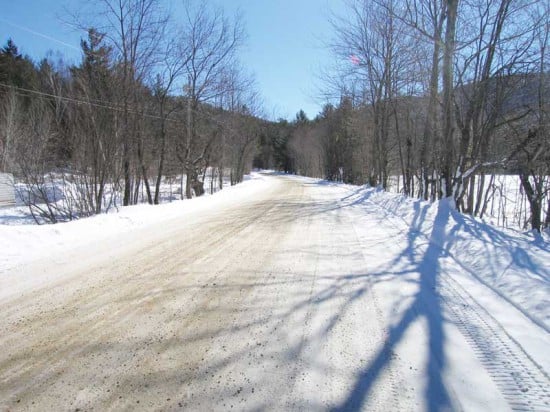 MANITOULIN—Cold temperatures and snowy weather last month led to many Island residents complaining about the condition of Manitoulin’s highways, with the blame falling to DBi, the Ministry of Transportation’s (MTO) new road maintenance provider on Manitoulin.

The highway road conditions on the weekend of January 19 led both the Northeast Town council and Audeck Omni Kaning (AOK) chief and council to send letters to the MTO, complaining of the poor road conditions.

“It was unreal,” said Councillor Michael Erskine, referring to the condition of Highway 540 the weekend of January 19 at a council meeting last month. “I have never seen it that bad.”

A number of other councillors agreed, adding that they had been receiving complaints from various residents.

“This issue (the Island’s highway conditions this winter) was addressed at our council meeting on January 22 and we are totally dissatisfied with the road conditions this past weekend (January 19),” AOK Chief Patsy Corbiere told The Expositor. “As a result of our discussions, a letter is also being forwarded to the MTO outlining our dissatisfaction with DBi and the condition of the roads. The roads were glare ice and were not salted/sanded other than the corners, which is totally unacceptable. We have had numerous complaints and have posted the DBi phone number in our community newsletter so band members can complain directly. We hope that the services of DBi improve dramatically.”

Assiginack also reported that its council had discussed the road conditions the weekend of January 19.

“There were discussions at council on how bad the highway road conditions were, but no motions were made,” explained Assiginack clerk/treasurer Alton Hobbs. “We have received a number of complaints from ratepayers as well and have been passing along DBi’s contact information.”

“I am on Highway 17 heading to North Bay for a meeting,” said Gerry Strong, contacted over hands-free telephone. “I have never seen the highway like this. The highway from Little Current to Espanola was snow covered. There were two plows out, but they seem to send them out too late.”

Mr. Strong indicated that the Central Manitoulin council intends to discuss the road conditions on the highways in their community and said that he felt the council would likely be joining other Island communities in sending comments to the MTO on the matter.

On the opposite side of the spectrum, Tehkummah Reeve Gary Brown commented to The Expositor that he felt the road conditions this winter were the same as last year.

“I haven’t been receiving any complaints,” said Reeve Brown when asked about the highway road conditions in his community. “I actually think the roads have been equal to previous years. It’s just that time of year and we’ve had a lot more snow this year. The weather has a lot to do with it and the guys are doing the best they can.”

Dale Van Every, chair of the Dawson Township Road Board, had a similar opinion of the road conditions as Reeve Brown.

“The roads haven’t been the best,” admitted Mr. Van Every. “But the one weekend it seemed to be an equipment issue and they came back to finish after they fixed their plow. The weather has been bad, so were just going to wait and see how the rest of winter goes—give them a chance.”

Kagawong Mayor Austin Hunt commented that he had also been hearing complaints from community members about the poor highway conditions this winter.

“I have heard a lot of people complaining and I’ve been out on the roads myself, but I don’t think they are any worse than pervious years during the same conditions. However, yes, there does seem to be a fair amount of people concerned.”

Chief Joe Hare of M’Chigeeng told The Expositor that he has not been concerned about the highway conditions this year either.

“It’s Northern Ontario in the winter,” said Chief Hare. “We’re tough and we can take the snow.”

In Gore Bay, Mayor Ron Lane explained that the town does not depend on DBi to maintain the section of Highway 540B that runs through Gore Bay, as the town took over the responsibility this year.

“I have been out of the country for the past week, so I have not experienced the current road conditions first hand, although from speaking with family members I understand the roads have been icy during the recent cold weather,” Mayor Lane told The Expositor. Our next council meeting is February 11 and if the road conditions continue to be an issue we will no doubt be adding it to our agenda.”

“The highways have really been terrible this winter,” said Keith Jewell of Jewell’s Collison Center in Gore Bay. “I travel from Mindemoya to Gore Bay daily and the roads have been bad, and I have heard a lot of complaints.”

Despite the complaints, Mr. Jewell said that the number of tows isn’t up from last winter.

“Realistically, the roads may be bad, but people have winter tires and studs and they are driving for the conditions, so no, the winter tows aren’t up from other years,” added Mr. Jewell.

Russ Moore of Moore Auto Sales and Service told The Expositor that for him, tows had been up this year, but that it had been due to the freezing rain.

“Everyone has been complaining about the roads,” said Mr. Moore, “but with minus 30 weather the salt doesn’t work and the sand won’t stick, so people just need to adjust their driving to the conditions.”

DBi was unable to comment regarding their service on Manitoulin, and referred The Expositor to media relations for the MTO.

The Expositor inquired if the MTO had been receiving complaints from Islanders regarding the Island highway conditions and DBi, and also if MTO would be taking any action to ensure better road conditions moving forward this winter.

“The Ministry of Transportation’s focus is keeping our highways safe,” Gordan Rennie, communications coordinator with the MTO responded to The Expositor. “This includes ensuring that Ontario drivers have access to the information they need to learn about road conditions before they head out on the road with updates several times a day ontario.ca/trip or by calling 511.  Ensuring that winter maintenance is carried out in accordance with our standards and operational requirements will continue to be a priority.”

“DBi Services is our maintenance contractor for the Sudbury/Manitoulin area,” continued Mr. Rennie. “Our contract with DBi defines several operational requirements, which include monitoring weather and road conditions in order to respond quickly and appropriately, spreading sand or salt within 30 minutes of the arrival of a storm event, deploying plows when there is an accumulation of two centimeters of snow or slush, and continuing these operations until our standards are met. The ministry continually monitors the contractor’s operations to ensure they are meeting the requirements of their contract and our high standards for winter maintenance.  If we find that an operational requirement is not met, we impose consequences and compel the contractor to review and modify their operations to ensure that requirements are met in the future.”

Mr. Rennie explained that on the evening of January 19, heavy rain for 45 minutes followed by a temperature drop over the course of the night and next day led the roads to become snow packed and icy and made salt ineffective.

“Sand was used and by Monday morning, January 21 636 tones of sand was applied to the highways on Manitoulin Island,” said Mr. Rennie. “All available units were utilized during this period. A severe or long-term storm event as occurred on the weekend of January 19 may delay restoration of the highway to normal conditions, and even with the best efforts of highway crews, extreme weather can result in the closing of the highway by the Ontario Provincial Police.”

“We continually review our winter maintenance operations and our contractors to make sure our high standards are met,” concluded Mr. Rennie. “This includes monitoring contractor performance before, during and after a storm. We monitor our contractors to ensure they are delivering on contract requirements and achieving provincial maintenance standards. This due-diligence includes monitoring our contractors’ activities with GPS-based systems and conducting field-level audits to inspect the condition of the highway and the results the contractor delivers. Ensuring our service providers deliver local requirements and meet provincial maintenance standards is a top priority for the Ministry of Transportation.”