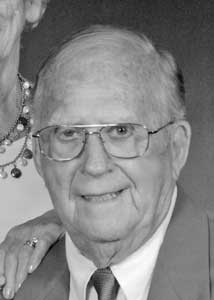 Perry Rosswell Williamson, age 83, passed away peacefully on March 9, 2013 at Munson Medical Center in Traverse City, MI. Perry was born on February 21, 1930 in Ecorse, Michigan to the late Henry (“Harry”) and Clarice (Card) Williamson. He married Rosemary (“Mickey”) Stone in 1952 who preceded him in death in 1986. Perry married Effie McQuarrie on March 7, 1996 in Florida. Perry honorably served our Country in the United States Navy during the Korean Conflict. After his time in the service, he was a court reporter in Wayne County, salesman for C.L. Rieckhoff Company and was vice-president of Tezak Construction Company. He was active in the Grand Traverse Hockey Association for many years as well as the Big Brothers/Big Sisters organization and had a lifetime membership to the Trenton-Wyandotte Lodge of the Masons. He was also a dedicated member at the Central United Methodist Church where he attended for many years. In his spare time, Perry enjoyed gardening and fishing. He also loved spending time on Manitoulin Island in the Eagle’s Nest Area and was a member of the LMAA. Surviving Perry is his wife Effie, children, Mark Williamson, Laura (Rob) Tubbs, and David Williamson, step-children Rob (Nadine) Williamson, Janet (Brian) Besley and sister Marjorie (Carl) Mihalyfi. Also surviving Perry are his grandchildren and step-grandchildren Isaac Williamson, Natalie and Olivia Tubbs, Owen and Ross Parker Williamson, Kaitlyn Williamson and Taylor and Brenden Besley. Numerous cousins, nieces and nephews also survive. Perry is preceded in death by his parents, his first wife Rosemary and brother James Douglas Williamson. Funeral services will take place for Perry at 11 am on Friday, March 15, 2013 at the Central United Methodist Church with a visitation held from 10:30 am to 11 am. Pastor Dale Ostema will officiate. Burial will take place in the Spring at Monroe Center Cemetery. In lieu of flowers, memorial contributions may be directed to a charity of one’s choice. Please sign Perry’s online guestbook at www.reynolds-jonkhoff.com.