MANITOULIN—As residents and summer visitors to Manitoulin Island are painfully aware, 2018 was a bad year for forest tent caterpillars. On the eastern side of Manitoulin in particular, residents had to put up with defoliated trees and withering masses of caterpillars on houses, trailers, decks, roads and sidewalks, along with a steady rain of fecal pellets.

As the winter of 2018-2019 disappears, residents throughout the Island are wondering what the numbers will be like in the summer of 2019. Predicting outbreaks or estimating the number of years forest tent caterpillars will be abundant is difficult, but there are signs that the current cycle may be over for at least part of the Island.

The population in the eastern half of the Island appears to have crashed last June in the caterpillar stage, but it is not known if some moths managed to survive and flew to other parts of the Island in mid-summer to lay eggs which will result in high nuisance numbers in 2019.

However, there are worrisome signs that the 2018 version of what is usually a 10- 13-year cycle ended differently from that of previous years. Outbreaks usually last two to four years, so past experiences suggest one more year of high numbers south of Little Current, but I suspect not.

The forest tent caterpillar is the immature stage of a moth with the scientific name Malacosoma disstria. It is a member of a family of tent-making moths, however, this species does not make tents.

In contrast, its close relative, the eastern tent caterpillar, with the scientific name Malacosoma americanum, does make tents and are commonly seen on roadside shrubs throughout the Island (see The Manitoulin Expositor June 7, 2017).

The life cycle and biology of the forest tent caterpillar was described in this newspaper last summer (see The Manitoulin Expositor June 6, 2018), however, in brief, its biology is as follows:

The forest tent caterpillar is a common and natural insect herbivore across central and southern Canada. Its preferred hosts are aspen poplar, birch, maple and ash. In most years, populations remain low and small clusters are found widely dispersed in forests with rapid increases in populations usually prevented by the actions of parasitic wasps and flies.

However, for poorly understood reasons, the numbers start to increase dramatically every 10-12 years and host trees are heavily defoliated. Fortunately, healthy trees are usually not harmed during such outbreaks and produce new leaves about two weeks after the defoliation.

Stripping foliage by forest tent caterpillars is therefore one of nature’s regular cycles. There is even evidence that the huge amounts of fecal pellets produced by caterpillars give the trees such a jolt of nitrogen fertilizer that they grow more luxuriantly the year following defoliation compared to years without defoliation.

This insect has one generation per year. It overwinters in the egg stage which are found in clusters that encircle small branches. Clusters of eggs look like the metal eraser holder on pencils. They are easy to see on small yard trees and can be removed before eggs hatch in the spring.

Caterpillars hatch in early spring and start feeding on newly flushed leaves. They grow rapidly in the next five to seven weeks becoming full grown by mid-June.

Caterpillars feed in clusters while immature, but once they are full grown they wander individually in search of sites to make their white, silken cocoons.

It is in this wandering stage they become a nuisance as they walk in mass across sidewalks, decks and roads and climb up the sides of our buildings. Some roads of Manitoulin last June were blackened with their squashed bodies.

Cocoons are made in protected sites such as crevices in bark. In urban areas, they construct cocoons under any structure with an overhang. Caterpillars turn from pupae to adults in about two weeks inside the cocoons.

The moths are nocturnal with the males appearing first so they can mate within minutes of females leaving their cocoons. Females are strong fliers and can be dispersed by the wind, often flying hundreds of kilometres.

In the two previous outbreaks I experienced (1989 and 2003) in Sudbury and on Manitoulin Island, the first year of the cycle resulted in masses of caterpillars, followed a few weeks later by huge numbers of moths on the sides of buildings near outdoor lights.

Then in the following years, numerous species of parasitic wasps and flies that attack forest tent caterpillars were abundant and it was these insects that caused the population of caterpillars to crash.

That is, as the population of caterpillars increased, the insects that feed on them also increased. One of the most common parasites is a fly about the size of a housefly.

It is commonly known as the ‘friendly fly’ because of its habit of landing on our skin. Its scientific name is Sarcophaga aldrichi and were so common in past outbreaks, they killed about 80 percent of the forest tent caterpillar pupae.

Bacterial, fungal and viral diseases also impact caterpillars with the most common called baculoviruses. These viruses, come in the form of protein crystals that are found naturally in the ground and on leaf surfaces. They only affect caterpillars and can cause high rates of mortality during an outbreak.

When the viruses are ingested, they proliferate in the caterpillar’s stomach and turn the internal organs into mush. Body fluids leak from the corpses and when they dry out, millions of new virus particles are released into the environment to infect other caterpillars.

As most fully grown caterpillars near Sheguiandah started looking for sites to pupate in 2018, they soon became infected with viruses. Many died with their bodies going limp, hanging in an upside down U-shape by one or two legs, characteristic of death due to viral diseases. This is why the disease is sometimes called the wilt disease.

Virus particles persist in the environment even when populations of tent caterpillars are low and cause little mortality. But when the populations explode, massive propagation of the virus occurs, resulting in higher mortality.

After having our summer trailer, deck and patio covered with full-grown larvae in late June last year, I could not find a single healthy larva. Some made it to the cocoon stage as about 100 were found on and near our trailer; however, not one of the cocoons I opened contained a live pupa.

Furthermore, not one adult moth appeared at the outdoor lights on our trailer, whereas typically at this stage in an outbreak, hundreds of moths cluster on the side of buildings near light fixtures.

It appears that after defoliating their host trees in the Sheguiandah area, the 2018 population of forest tent caterpillars came to an abrupt and atypical end.

Something is not right as the usual population trend of this insect, along with its parasites, did not occur. That is, the usual parasites did not appear in synchrony with the large populations of tent caterpillars.

Forest tent caterpillars will be less abundant on the east side of the Island in 2019 than they were in 2018. Pockets of infestation may occur elsewhere on the Island if some of the 2018 caterpillars made it to the adult stage and flew west to lay eggs. It is also possible that adults from north of the Island arrived in July to lay their eggs.

Although the 2018 caterpillars near Sheguiandah died because of viral disease without the involvement of parasites, such a trend, if widespread, would be unusual. Of concern is that the parasites of forest tent caterpillars appeared to be missing in 2018. These parasites also feed on the caterpillars of other moths and it is possible their populations will increase if unchecked.

If the absence of parasites of the forest tent caterpillar near Sheguiandah occurs elsewhere on Manitoulin, it may be an example of a trend in overall decreases in insect numbers.

Although there is no scientific proof or long term data obtained by yearly sampling, it appears there are fewer insects today than years ago.

Joe Shorthouse is a retired professor of entomology at Laurentian University and a summer resident of Manitoulin Island, He frequently contributes to The Manitoulin Expositor. 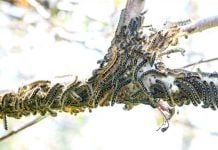 2018 a big year for tent caterpillars 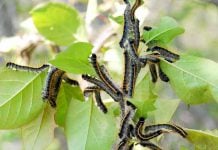