SUDBURY – At a special meeting held March 30, trustees and teacher representatives of the Rainbow District School Board (RDSB) presented a united front in their opposition to a provincial proposal to offer permanent remote learning in Ontario. RDSB Chair Doreen Dewar said the Ministry of Education is developing a draft plan for post-pandemic remote and online delivery of education that is not in the best interests of students and includes significant negative impacts to students and their education.

A March Ministry of Education presentation obtained by the Globe and Mail laid out three forms of online school that could be offered: full day synchronous learning for students of all ages; individual high school courses; and fully independent online learning as offered by TVO, for example.

“My hair has been on fire since the announcement was made,” stated Trustee Dena Morrison, who put forward a motion against the plan. “This is a slippery slope to privatization of the public education system. We can’t let that happen.”

What the proposal means and what parents need to understand, said Ms. Morrison, is that the more students that choose that option the fewer resources the board can access. “Fewer resources means fewer staff at the local school level and fewer options for students. You will have fewer supporting, nurturing and caring adults to do all the other wraparound things we do.”

“Students rely on and benefit from in class education with a professional teacher,” said Eric Laberge, president of the Ontario Secondary School Teachers Federation, District Three. “All of this is at risk with an online learning program. This is motivated by cost cutting and profit. I’m absolutely confident the in class experience can’t be replicated.”

An online delivery system could be sold to the highest bidder, according to a leaked Ministry of Education memo last year, Mr. Laberge said. “There is growing evidence the government is using this as a diversion to privatize education.”

Trustees and school board associations are speaking out but a larger public voice is needed, he added, urging people to call RDSB members to make their voices heard.

“We all have the best interest of public education in our hearts,” said Liana Holm, president of the Elementary Teachers Federation of Ontario (ETFO), Rainbow teacher local. “Doug Ford and his government want to dismantle a world-class education system by redirecting dollars,” she added. “They have the capability to push forward their agenda. The ETFO has grave concerns with this. Remote learning is not a good choice for elementary education from a health and learning perspective. Increased screen time is detrimental to health. Students benefit by being in front of certified educators.”

“Students would also lose out on social development, athletics and extracurricular clubs. In class learning is much more than numbers on a page, words in a book or pixels on a screen. Remote learning was never supposed to be permanent.”

Both Ms. Holm and Mr. Laberge cited a report from the Toronto Hospital for Sick Kids that concluded in-school learning is the ideal scenario for educating youth.

RDSB Education Director Norm Blaseg said the document, ‘Expanding Students’ Access to Online Learning,’ has not been released publicly by the Ford government. His copy came embedded in a news article. The document includes plans to implement permanent remote learning as of this September.

“We have not received notice or a request for input,” said Mr. Blaseg. “At this time boards are in the middle of staffing for the 2021-2022 school year. Given this leaked document, the Rainbow board has sought clarification from the province, which has not come forward.” RDSB has nine collective agreements in place and are planning for a regular school year, including funding.

Mr. Blaseg said there is “little contextual evidence” to say that board surveys reporting support for online learning “due to a pandemic scenario” is validation for the creation of a permanent online remote option. He acknowledged that some students could thrive on the initiative, “but that is a small minority. Circumstances for parents must be optimal.”

The province plans to provide remote students with wraparound services such as breakfast programs, mental health supports and access to WiFi. “That sounds extremely inclusive,” Mr. Blaseg said. “Staffing to support these initiatives would come from existing dollars and pull from current services that support face-to-face learning. No new monies will be forthcoming to oversee these initiatives.”

In rural settings, permanent remote learning could make the need for physical buildings moot. If too many folks opt for the remote scenario, Mr. Blaseg added, the ministry could close schools that are too small to warrant remaining open.

Kathy Wachnuk, superintendent of schools, noted many students with special education or mental health needs do not have the supports at home to facilitate learning and specialized equipment for learning won’t be provided through this plan. “Many special services, such as occupational or physical therapy, must be in person.”

There may be some advantages such as elimination of transportation challenges, said Ms. Wachnuk. Anxious students may learn better at home and remote learning offers an opportunity for students to learn when they can’t attend physical school. However, students could end up isolated and lonely. They may be less concerned about food and hygiene and child abuse would be harder to detect. Remote learning requires strong family support that is not always available, she said.

Trustee Judy Kosmerly said one of her concerns is the speed at which the government wants to implement these changes. “They haven’t provided any opportunity to consult or requested input. We haven’t gone through a full year (of remote learning) and should wait to see progress.” She also noted security and privacy concerns and students falling behind. “I can’t support the government proposal as presented,” she said.

First Nations contribute $4.7 million to RDSB through educational service agreements, said Trustee Linda Debassige. The proposed model will only facilitate additional traumas, inequities and disadvantages in an already disadvantaged population that has a clear treaty right to education, she said. Trustee Morrison noted that Indigenous learners make up 20 percent of the RDSB student population.

The motion, “That the Rainbow District School Board write a letter expressing its grave concerns about the provincial government’s proposed plan for online and remote learning” was passed unanimously by the trustees.

“In-person public education is the great equalizer,” said Chair Dewar. “It levels the playing field for all children. This is what we are fighting for.” 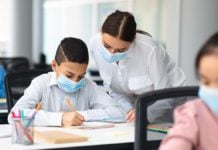