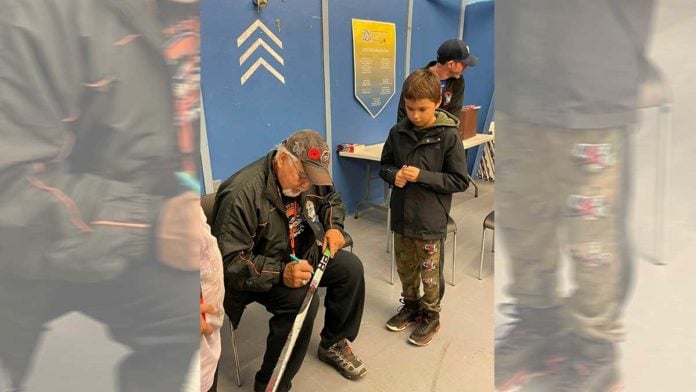 OTTAWA—All good things come to those who wait, it is said, but hockey legend Reggie Leach, the Riverton Rifle, has never been one to sit upon his laurels. In the months since his elevation to the Order of Canada was announced, Mr. Leach has continued to crisscross the nation to deliver his message of hope and determination to thousands of youths while the induction ceremonies were delayed by pandemic restrictions.

On October 28 the former professional hockey player, motivational speaker and life coach was finally able to make the journey to Rideau Hall in Ottawa for the induction ceremony.

“It took a while, but I was finally able to go to Ottawa to meet everybody,” laughed Mr. Leach. “My daughter was able to join me, my niece as well, and of course my wife, Dawn.”

Mr. Leach is best known to the hockey world as “The Riverton Rifle,” Mr. Leach was on a Stanley Cup winning Philadelphia Flyers, his name adorns a Conn Smythe trophy, he notched 381 goals during 13 National Hockey League seasons and shares scoring records with legends the like of Maurice “Rocket” Richard, Wayne Gretzky and Mario Lemieux—but those accolades lie in the past. Mr. Leach is particularly proud of his activities since.

“I always say I will be known as a hockey player,” he said. “But it is what I have accomplished while off the ice, helping out organizations, that keeps me going.” He has always maintained that he is prouder of what he has accomplished in his off-ice life than what he did on-ice. Over the course of his new life as a motivational speaker Mr. Leach has visited over 300 First Nations communities bringing his message of self-reliance and determination.

Mr. Leach said that his message to communities, many of which are being ravaged by the scourge of drugs and alcohol, boils down to making better life choices, taking responsibility for bad decisions and choosing to move forward down a better path.

“I find that young people today are too focussed on finding someone else to blame for the bad decision they make in their lives,” he said. “It’s their parent’s fault for what is going wrong in their lives. It’s always someone else’s fault—but they are not the ones making those decisions, you are.”

Mr. Leach says he speaks from experience, having made plenty of bad decisions in his own life. “But they were my decisions,” he said, taking full ownership for his own missteps, both on and off the ice. But while that baggage might weigh down his duffle bag, he refuses to let those decisions define him. His gaze is invariably focussed on the path ahead.

“I am positive myself,” he said, “and I try to bring as positive a message as possible. We all make mistakes, but you need to learn from those mistakes. Some people just keep on making the same mistakes, they don’t know how to put those bad choices aside and make better ones.”

Mr. Leach has spent several years running a hocky school that is now run by his son Jamie. “I don’t go now unless I am requested,” he said. “I just visited Brunswick House First Nation. Jamie couldn’t make it or the Shoot to Score guys.” Mr. Leach took the opportunity of a speaking engagement to get out on the ice with youth from the community. “It was nice to be out skating with the kids.”

“A lot of those kids don’t have the best home lives,” he said. “I know it will be a tough life for a lot of them. Once they leave the ice, they are going back to those homes. I tell them ‘enjoy being a kid’ because being an adult is a lot tougher.”

The key notes the former Philadelphia Flyer and member of that team’s infamous “Broadstreet Bullies” is that you do not have to let that life define who you are or the choices you make in life. Just stop looking for someone else to blame, you can take control of your own life’s decisions to climb life’s ladder to a better world.