MANITOWANING—It takes a fair bit to rattle Henley Boats Dave Ham, but he admits to being “a little concerned” about the recent sabre rattling over tariffs taking place between the US and Canada.

“To be honest, I am not entirely sure how it will impact us,” he said. “I am contacting our partners to see how this might play out for us. We do a lot of business with Cole International and hopefully they will have a better handle on this than we do right now.”

Part of what is muddying the waters for Mr. Ham are details on how the tariffs will be applied as well as whether and how they will impact finished product. “We don’t know if it will be applied on the total value of the boat or the weight of aluminum that goes into the product.”

Mr. Ham sources a lot of his aluminum from the US, as well as from Canadian suppliers, so countervailing duties will likely be an issue, but right now it is hard to tell.

“It’s a mix,” he said. “We buy flat plate from a company in Chicago, some from Texas and specialized product from the east coast.”

The boat builder noted that NMMA Canada (National Marine Manufacturers Association Canada) has voiced strong concerns about the looming trade war. “They have had an emergency meeting on the matter,” said Mr. Ham. “Most of the boat companies import boats from the US and with 10 to 15 percent added on (to aluminum boats) coming across the border, not to mention a 30 cent difference in the exchange on the dollar, well, with 15 percent you would be looking at a 45 percent jump in the price of a boat.”

The NMMA has made its official submission to the Government of Canada and the prime minister outlining their concerns regarding retaliatory tariffs. “A trade war between Canada and the US is bad for the recreational industry across Canada and it is extremely disappointing that the Government of Canada has had to make these drastic decisions,” notes their website, urging their members and others in the marine community to weigh in on the matter. “The more voices are heard, the stronger the voices are.”

Boating Ontario Executive Director Rick Layzell has recently taken over the helm of the organization, just in time to see another tsunami hit the industry. He points to Whitefish’s Legend Boats as an example.

“Their entire business model is built around aluminum fishing and pontoon boats,” he said. “They are absolutely going to get slaughtered by this.”

Under the tariffs, notes Mr. Layzell, boat prices could jump from an average of $50,000 to as high as $65,000, affecting both the consumer and the industry as a whole. “We estimate that with the tariffs back and forth at the border there will be a 25 percent hike in the retail cost of a boat,” he said. “That’s 10 percent on the plate aluminum going down to the States and 10 percent on the finished boat coming back. Plus, there is HST added onto that, that’s how we come up with 25 percent.”

Boating Ontario, which represents 30,000 direct and indirect jobs across the province, is projecting a 20 percent job reduction in 2019. “We will see job losses virtually overnight as we go into the 2019 season and we’re predicting five to six thousand jobs will be gone.”

Not great news for an industry that has not yet fully recovered from the 2008 economic downturn.

“I personally know of at least 500 orders that have been cancelled in the US by Canadian retailers,” said Mr. Layzell. Added to that just one company in the US has reported that the nine dealers that were coming down to look at the 2019 models have indicated they are no longer coming to look over the product. “If you figure a couple of dozen boats per dealer, well there’s the math.”

But as for Henley Boats, things seem to be currently resting in the eye of the hurricane.

“We are still selling all kinds of boats into the US and the phone keeps ringing with inquiries from all over, so I guess we will see what happens,” said Mr. Ham.

Mr. Layzell cautions that welded aluminum boat manufacturers cannot pick up the slack either. It is an apples and oranges kind of thing, he notes. “They really are two completely different products.” The consumer boat industry retailers are selling fishing and pontoon boats, not heavy aluminum and steel workboats.

“There was absolutely zero consultation by government with industry on this,” he said. “When you go through the list of items that are being targeted, most of it are things like yogurt and felt pens—fairly small things. But if you go far enough down the list there are four lines buried that all hit the aluminum boat industry.”

“People think that every boater is rich,” noted Mr. Layzell. “But the average household income of a boat buyer in Ontario is $100,000. That is not rich by any means today.” 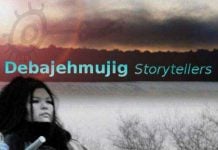