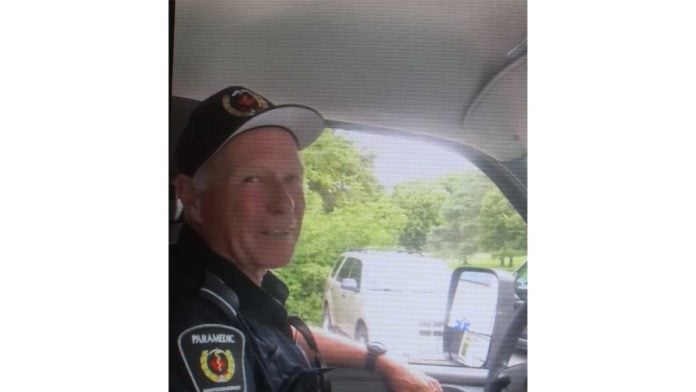 GORE BAY—When he received a page to respond to a (very serious) code four incident, Gore Bay paramedic John Allison (with the Manitoulin-Sudbury District Services Board Emergency Medical Services) was bemoaning the fact that this would be one heck of a tough way to end his 25-year career as a paramedic.

“I was all ready to go into retirement, I just wanted to walk away with no hoopla. Then we received a page for a code four serious incident. They blindsided me,” Mr. Allison quipped on Tuesday of last week. Paramedic “Jessica Churchill had set up the whole thing.” The code four was actually to receive congratulations from paramedic staff members and administration on his retirement.

“I feel honoured to be working with you on your last shift,” stated fellow paramedic Jessica Churchill on the Facebook post-video, on Mr. Allison’s last shift August 29.   “And I thank you for all that you taught me and making this the best trip I have made.”

“It’s hard to let go,” Mr. Allison admitted to The Expositor, noting he had turned 65 years young on August 15. “I started as a paramedic on May 8, 1995, with the Gore Bay Ambulance Service (which was later purchased by Dave Hill and turned into Rainbow North Ambulance Service, and from there the Manitoulin-Sudbury District Services Board EMS).”

“When I started the paramedic ambulance service was a volunteer service based out of Gore Bay,” said Mr. Allison. “For me, I sort of fell into it. When we moved up to Gore Bay, I worked at Manitoulin Transport for 12 years (29 and a half years in total with the company as a truck driver having also worked for Listowel Transport).”

“Marie Clarke got me involved in the business, and when I started there were people like Hans Dittmar, Connie Harrison, Rita Hall I worked with,” said Mr. Allison. When he decided to take a career as a full-time paramedic, “I had to go back to school for EMS training at Cambrian College in 2003. It was mostly an online 18-month course, but every few weeks I would have to go to Sudbury for practical training.”

Jennifer Tasse, deputy chief paramedic with MSDSB EMS, who is from Manitoulin Island, told The Expositor, “John is a great guy. I met John in 2005 and he was my ambulance partner in Gore Bay. When two new positions were created John and I were hired for this when DSB took over the paramedic ambulance services.”

“I was his ambulance partner, and later his direct supervisor,” said Ms. Tasse. “One of the reasons everyone loves John is his compassion for his profession, and he immerses himself in his community. He has a true dedication to serve, and he has been a mentor to many.”

“I’m not an emotional person, but when I watched the video on Facebook of the end of John’s last shift, I cried,” said Ms. Tasse. “It was so nice. John has been a paramedic for 25 years and has done his job very well. John will say, ‘I’m just doing my job,’ but for paramedics like him it is all about community. I know that he and fellow paramedic Aaron Wright in Gore Bay on days off have brought people home when they have been discharged from the hospital. John is community based. He’s dedicated and has served his community with compassion.”

Fern Dominelli, CEO of MSDSB told The Expositor, “John is so humble, and has been a dedicated employee long term. When we took over the ambulance paramedic service in 2004 he joined as well. He’s been a very loyal employee, and any recognition he receives is well deserved.”

“To me, I just did my job,” stated Mr. Allison. “It is a difficult job at times, but I’ve been fortunate to meet a lot of great people and had good times and hard times over the years.” He is among the four percent of paramedics who retire at the age of 65 and pointed out he is still in good shape.

“In this position you have to rely on your work partner and make sure you have their back,” said Mr. Allison. “I’ve been fortunate to have worked with many good partners over the years. And I’ve had a great support system at home with my wife Johanna and the kids.”

The final call out to Mr. Allison on his last shift was taped and played on Facebook. After this was posted he received literally hundreds of congratulatory comments on Facebook and Instagram from local and off-Island residents, dispatchers and fellow paramedics he has worked with over the years.