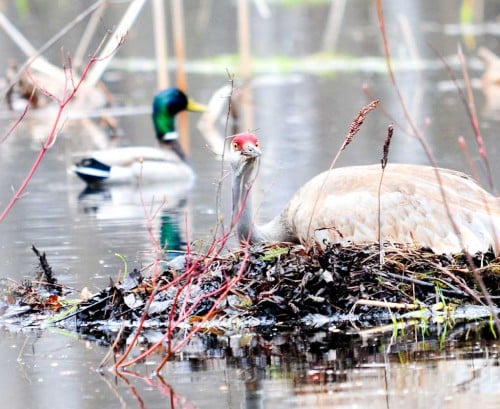 PROVIDENCE BAY—Hunted to the very brink of extinction, sandhill cranes have executed a most remarkable turnaround in their population numbers in an amazingly short period of time. Over the past four years doctoral candidate Everett Hanna of Longpoint Waterfowl and a group of post-graduate students have been collecting data on these remarkable birds in the Providence Bay/Spring Bay area.

There was remarkably little understood about the sandhill crane before Mr. Hanna and his compatriots began their investigation into these migratory creatures. The eastern population of these birds, once hunted commercially for their tastier qualities, consisted of one or two dozen breeding pairs on the US side, creating what is known as a genetic bottleneck for the species.

“There wasn’t a lot of genetic diversity,” said Mr. Hanna, explaining that such genetic homogeneity can make populations highly vulnerable. One wrong turn in the gene pool can open up a doorway for a pathogen to devastate the population through disease, for instance. Although the eastern population of sandhill cranes now tops some 80,000 individuals, testing has shown they all spring from essentially those 24-odd ancestors.

There are six different populations of sandhills, with the mid-continent crew numbering close to one million, but there is little intermingling of the groups as they occupy very different regions of the continent. “There is no record of the populations mingling,” said Mr. Hanna.

When he began studying the Manitoulin population, estimates came in around 9,000 or so birds, so the rebound has been quite profound. Mr. Hanna noted that once the sandhill crane reaches breeding age there are not a lot of predators that can tackle them due to their relatively massive size. While the adults weigh in at less than 10 kilograms, their wingspans can stretch out to a couple of metres, making them one of the largest birds on the North American continent and nearly as accomplished at soaring aloft as eagles and hawks.

Sandhill cranes are relatively cagey customers, taking flight at the slightest provocation—another factor in their remarkable population rebound. “There is a high mortality before they are able to fly,” said Mr. Hanna. “After they can fly, there isn’t anything that can get a hold of them.” Once sandhill cranes can spring into the air when the alarm sounds, they can easily evade the coyotes, raccoons and other predators that prey upon them as young.

Mr. Hanna described observing one flock that landed in a field where the team had set up capture net rockets. “There was an empty roll of electrical tape laying in amongst the flattened grain stalks,” he recalled. “We could see one of the lead cranes stop, look down, let out a warning call, and they all took off.”

The cranes have developed a nervous nature, even though there are few creatures that can safely tackle an adult. “There is a kind of arms race in the natural world,” said Mr. Hanna. Because they are able to evade most predators, the sandhill crane has a relatively low fecundity-laying about two eggs per breeding pair a year. “Together they produce about 1.2 colts a year.” (Sandhill crane youngsters are called ‘colts.’)

When commercial hunting ended in 1916 with the passing of the Migratory Bird Act, there were very few birds left. But from the first breeding pair spotted on the North Shore in 1978, exponential growth has seen the numbers of this subset of the eastern population grow to some 13,000 to 15,000 birds in Ontario.

Since the cranes are also anything but creatures of habit, determining where they are going to hang out is tricky as well. “They do different things every day,” said Mr. Hanna.

Sandhill cranes are largely herbivores, existing on grains and seeds, but they vary their diet a lot depending on the needs of their bodies, explained Mr. Hanna. “They vary their diet depending on their physiological needs,” he said. “They need high protein in the spring.” Bad news for frogs, snakes, fish and other abundant animal protein sources.

But birds metabolize fats very differently than humans do. We generally burn immediate carbohydrates, especially when engaged in high activity such as running, but fat tends to remain untapped. Birds such as the sandhill crane can hook into that fat reserve for power when flying the immense distances to their southern nesting grounds in Florida and the Carolinas. So packing on the carbs through a heavy diet of grains in the fall helps to load up that fat supply.

The biggest surprise to Mr. Hanna during this study has been learning that the birds are not as in touch with the weather as might be assumed. “You would think that they would leave as the ice begins to form,” he said. But unlike their migratory counterpart the Canadian snowbird, the migration signal among sandhill cranes appears to be more attuned to the available food supply than the onset of winter per se.

The sandhill crane study has largely consisted of counting populations and making observations from a distance, but one of the more exciting activities took place in 2010 when the researchers used rocket nets to capture some 17 cranes. The cranes were banded and a number were fitted with solar powered GPS units that broadcast their locations every three to six hours for between three and five years.

The Manitoulin study is focussed on about 20 fields set out in 4.25-acre plots. Ten of those are designated as ‘observational.’

Cranes have a highly developed social system, and there can be a lot of aggression demonstrated in the fields, especially when there are juvenile birds about. “Parents tend to protect the feeding areas for their offspring,” explained Mr. Hanna.

The study of the birds is broken down into 10-minute observational periods, with the researchers watching the birds through binoculars or spawning scopes and jotting down the activities on a clipboard with predetermined categories.

Conservation management of the species is a critical reason the study is being carried out, noted Mr. Hanna, as is understanding the implications of crop depredation. While at this time of the year the cranes are largely focussed on ‘waste’ grain—that which is left in the fields after harvest—the birds can be a royal pain to farmers when they descend en masse onto a freshly-planted corn field in the spring. The cranes will simply pull up the corn, repeatedly. Some farmers have reported having to replant fields several times to get ahead of the cranes.

Another vulnerable time for farmers is if they swathe grain, cutting the stalks and letting the grain sit in the field to dry before combining. “That is a great thing for the cranes,” noted Mr. Hanna. Not so much for the farmer.

Farmers are able to apply for permits to shoot the birds under certain situations.

But for Mr. Hanna and his associates, the excitement has been in the chase of knowledge. “The key thing for me has been making an original species specific contribution to science,” he said. That the study has practical applications to conservation management comes in at a close second. Mr. Hanna plans to go on to teach at Sir Stanford Fleming College.