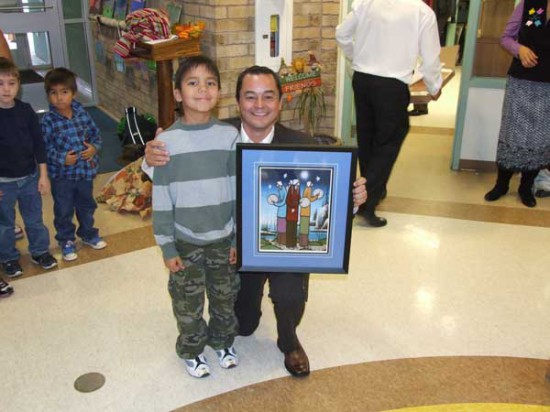 Chief Atleo came to visit the Whitefish River First Nation this week and found himself receiving the surprise honour at the hands of Elder Leona Nahwegahbow, herself a former chief of the Whitefish River First Nation. Elder Nahwegahbow performed the traditional naming ceremony, shepherding the national leader through the process and explaining the steps to those in attendance who could not follow her in Anishinaabemowin.

“Among my people, you don’t receive a name lightly,” said National Chief Atleo. “As is the way among my people, I will do my very best to bring honour to this name.”

Elder Nahwegahbow explained the significance of the name and how she came to choose Biidaasge as the spirit name for the grand chief, as with all such names, the inspiration came to her through a significant vision.

“Biidaasge is about honouring a leading citizen and one who aspires to do the very best in his ability to help the vision of the people who gives this name through ceremony,” said Elder Nahwegahbow. “Biidaasge is the Rising Sun, the Coming Light.”

The national chief walked clockwise around the circle, solemnly shaking hands with each person in turn, saying “Biidaasge ndishnikaaz” (my name is Rising Sun, the Coming Light) to each in turn, who replied with equal solemnity “boozhoo Biidaasge” or “aanii Biidaasge.”

Following the introduction, the assembly shouted out his new name with gusto, following their shout with a throaty whoop.

Then, like any birthday, it was time for gifts. The grand chief was presented with a number of quill boxes and a fine traditional pottery vase created by M’Chigeeng artist David Migwans on behalf of local First Nation communities and the United Chiefs and Councils of Mnidoo Mnising.

A small feast, prepared by local Whitefish River First Nation elders, followed the ceremony. National Chief Atleo set the traditional spirit plate, made of birch bark, in the fireplace along with an offering of tobacco.

Birch bark represents the Tree of Life in Anishinaabe culture, explained the officiate. “Birch bark gives us many things and we put this food out to our ancestors who have gone on,” he said. The birch bark plate on which the spirit food is placed has the reverse side facing out because those in the spirit world perceive everything in our world in reverse. “When the spirits look upon the land, they see everything in reverse,” he said.

National Chief Atleo said that he was visiting the Whitefish River First Nation community at the invitation of Chief Shining Turtle (Franklin Paibomsai) and to show support for his ally’s approach to First Nations healing.

“Chief Shining Turtle’s emphasis on healing and wellbeing shows a path with which we can meet the challenges facing our peoples,” said Chief Atleo, stressing that the solution to many of those challenges lies in the traditions and culture of the people. National Chief Atleo noted those traditions are a vital complement to striving toward the best in educational and economic attainment and lies at the heart of family and child welfare.

“I want to acknowledge his leadership,” said the national chief, who cited the inspiration for youth that is evident in the Whitefish River First Nation community. “Especially the young people, who will look forward to building the future of our communities.”

National Chief Atleo noted that Chief Shining Turtle acknowledged the many tragedies that have beset the community and did not shy away from acknowledging the pain and suffering those tragedies have inflicted.

Following the dinner, National Chief Atleo travelled to Shawonosawe Junior School where he met with staff and students and told the children a story from the traditions of his West Coast community about how the trees got their pine cones and the fate of the tardy hemlock.

It seems Hemlock was tardy in getting out of bed when the Creator called the trees to gather so he could distribute their pine cones to them. Hemlock arrived late to find a long line in front of him and tried to budge into the front of the line, but each tree rebuffed him and the Creator admonished Hemlock and sent him to the back of the line. Crestfallen, Hemlock’s branches droop even to this very day.

As with many traditional stories, Hemlock was not without redemption, and his branches serve the West Coast people well in harvesting eggs from the sea.

National Chief Atleo was greeted at the school with a traditional smudging ceremony. As the shell containing the sacred medicines was being prepared, each student’s hand flew up, eager to be the one selected to take the eagle feather and smudge around to each in the circle. There followed a number of songs sung by the students, including the Aanii Song, wherein everyone is acknowledged in the circle and O Canada sung in Anishinaabemowin. The National Chief returned the favour by singing a song of his people in return, travelling around the circle with a hand drum, accompanied by student Eli Paibomsai.

Young Mr. Paibomsai presented the national chief with a framed painting in the Eastern Woodland style on behalf of the school.

National Chief Atleo applauded the students for learning their traditions and languages and urged them to continue to honour their past as they embrace the future.

Prior to visiting Whitefish River First Nation, National Chief Atleo stopped in to the Espanola High School to bring his message of hope through culture and embracing the best in education and economic development.