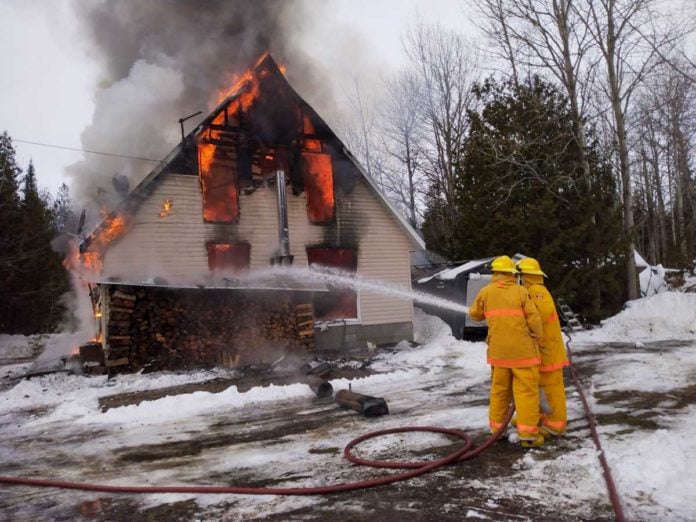 “When I saw the huge column of smoke when we got close to the house fire scene, I knew it was going to be a bad fire,” stated Tim Mackinlay, deputy fire chief of the Robinson Township volunteer Fire Department.

Mr. Mackinlay explained that at approximately 10 am (Thursday, January 13), the Robinson Township Fire Department responded to a structure fire (a house owned by Matt Blue) on Highway 540 (beside the Stop 540 Restaurant) in Silver Water.

“Upon arrival of firefighters, the building was fully engulfed in flames,” said Mr. Mackinlay. He said the cause of the fire is unknown and fortunately no lives were lost as there was no one in the home at the time of the fire.

A dozen (Robinson township) firefighters responded to the fire, said Mr. Mackinlay who had, “a big shout out to the Burpee and Mills Fire Department who stood on standby to respond, through the Manitoulin Mutual Aid program. And a big thank you to Jerry Martin for his service in providing a backhoe to knock down one of the structure’s walls. And a big thank you to members of the community for feeding the firefighters muffins and sandwiches.”

“Approximately 30,000 gallons of water was used to put out the fire,” Mr. Mackinlay told The Expositor. “This was a very stubborn fire to put out,” he said, pointing out firefighters used two tanker trucks and one pumper truck at the fire. As well, one portable pump was deployed.

“Our figures show that the two tankers each made 10 trips to Silver Creek to get more water. Each tanker was driven about 100 kilometres in total, shuttling water from Silver Creek to the scene of the fire,” said Mr. Mackinlay, pointing out that each tanker can hold 1,500 gallons of water.

After putting out the blaze, “the last tanker returned to the Robinson fire hall at 5:30 pm. “This was the second call our firefighting team had responded to in a 48-hour period,” said Mr. MacKinlay.

“Our firefighting team worked very well, like a well-oiled machine, in putting the fire out,” said Mr. Mackinlay. He pointed out that as well as the house, an adjoining shed at the back of the house was destroyed in the fire.

Hydro One crews responded to turn off the breaker at the pole on the property, and tripped the power, so power was turned off at houses in the area of the blaze.

An online Go Fund Me fundraising campaign has been initiated by Sara O’Connor on behalf of Matt Blue. The page reads, ‘Help Matt Blue with housing and necessities.’ “Hi everyone, as most of you know Matt has recently lost his home to an unexpected fire this morning. I am making this go fund me to hopefully help him restore some belongings and work towards building a new place to call home!”

“He appreciates any little bit of help, as especially around this time of year things tend to be a little harder. Thank you so much in advance, and trust me, it truly means the world to him!” wrote Ms. O’Connor.