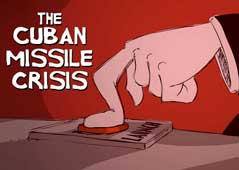 EDITOR’S NOTE: The following is a condensed version of the Remembrance Day speech delivered at the Kagawong Park Centre on November 11. By Rick Nelson, chair cenotaph board.

Former Kagawong Cenotaph chair Peter Fletcher was a Cold War veteran, and the late Mr. Fletcher was enthusiastic about a Cold War story being told at a future Remembrance Day service. There is no better Cold War story than the Cuban Missile Crisis. For 13 days, between October 16 to the 28 of 1962, the United States and the Soviet Union were eyeball to eyeball in a military standoff over the installation of Soviet nuclear missiles in Cuba, posing a direct threat to North America, including Canada. We know how the Cuban Missile Crisis ends. President Kennedy cut a deal with the Soviets and World War III was avoided. However, it was a real close call.

Manitoulin Island was hit with an early snowstorm that October of 1962. Some parts of the Island got as much as 10 centimetres of snow. It didn’t stop the locals from getting out and about. Whether it was to attend the weekly euchre party, checking out a rummage sale, or going to the Legion Dance, life carried on as the drama played out 2,000 miles to the south. Life carried on but Manitoulin Island was paying attention. At the Gore Bay high school, they prayed for peace over the public address system.

When word got out that the Soviets were secretly installing nuclear weapons in Cuba, NATO countries pledged support to President Kennedy. The Soviet Union’s leader Nikita Khrushchev didn’t have much respect for Kennedy. He thought Kennedy was naïve and weak and shared Diefenbaker’s view he was inexperienced. Those alleged and unflattering character traits Khrushchev thought he could use to his advantage in manipulating the president. He was convinced that once Kennedy found out there were secret Soviet nuclear bases in Cuba, with operational nuclear weapons just 90 miles away from American shores, it would be too late for him to do anything about it. He’d just have to live with it.

The country’s leader, Fidel Castro was fine with that. He was absolutely paranoid the Americans were going to invade Cuba. They’d tried it once before back in 1961 with the Bay of Pigs invasion. So, Cuba signed a nonaggression treaty with the Soviet Union believing that with their nuclear weapons on his island Kennedy would never dare invade Cuba. That turned out to be a serious miscalculation. When Kennedy found out what the Soviets were up to, he blockaded the island, demanding Khrushchev remove the missiles at once. Either the Soviets cooperated, or he would launch airstrikes against the missile bases to be followed up with an all-out invasion of Cuba and he wasn’t bluffing.
Assuming hostilities were to break out, 15 minutes is about all the time it would take for a Soviet missile, launched from Cuba, to reach Manitoulin Island. The good news is that Manitoulin Island was never a military target. The closest target to us might have been North Bay, the Canadian headquarters for NORAD. The bad news, the Island’s population may have died anyway…from radiation poisoning.

Remember a couple years ago we had to breathe in all that smoke from forest fires originating from the western provinces? What if, that had been radiation? The missile bases in the upper western United States would have been targets from Cuba had all out nuclear war broke out in 1962. The prevailing winds could have carried radiation fallout to Manitoulin Island in only a matter of days.

It would have been a short life for Linda Lee McCullugh born in Mindemoya on October 17, 1962 to Mr. and Mrs. Milfred McCullugh of South Baymouth. It would have been a short marriage for Jiggs Elliot’s sister Judy who had just tied the knot in Little Current on October 20.
While the slow diplomatic responses between President Kennedy and Nikita Khrushchev were going on, out there in the field the two sides were playing some pretty serious military hardball, resulting in a shocking number of ill-timed mistakes and bad judgement calls that could have easily derailed the diplomatic negotiations and pushed us into World War III.

The Americans were at Defcon 2 at this point, just one step away from war. Both sides were on the highest state of alert when somebody thought it might be a good idea to send an American U-2 spy plane up to the north pole to do some “environmental reconnaissance.”

However, instead of flying north to Santa’s workshop the pilot got completely disoriented and ended up going west, into Siberia, Soviet territory. A technical state of war could be interpreted when the U2 accidently violated Soviet airspace. The Soviets thought this could be a first strike scenario and scrambled their fighter jets to identify the UFO. American fighter jets were then scrambled out of Alaska to intercept the Russian fighter jets. Both sides were equipped with nuclear tipped missiles on their aircraft. Fortunately, the U2 spy plane got his bearings, turned around and escaped Soviet territory in the nick of time before there was a confrontation.

This next story is a scene right out of the movie the ‘Hunt for Red October.’ A very important role for the American navy during the crisis was to hunt down Soviet submarines operating in or near the blockade zone. If a Russian sub was discovered sneaking around underwater, the Navy would attempt to force it to the surface and identify itself. Such was the case for Soviet submarine B-59.

This was one of four diesel powered submarines sent by Moscow to Cuba, each equipped with nuclear weapons. These subs were not designed to operate in tropical weather. And thanks to the overwhelming military superiority of the American fleet, not one of those submarines ever made it to Cuba. They were all located and chased out of the area. Being a diesel-powered submarine, B-59, was only capable of staying underwater for a limited amount of time, maybe 24 hours, and it had pretty much reached its limit trying to escape from the Americans who were hot on its trail. A battle group made up of 11 United States Navy destroyers and an aircraft carrier discovered and hassled B-59, beginning with dropping depth charges in order to get its attention. The explosives were apparently not strong enough to damage the submarine, but loud enough to make everyone inside miserable. One panicked B-59 crew member said it was like being inside a metal barrel, which somebody is constantly blasting with a sledgehammer.

On board a Soviet naval submarine, the order to launch nuclear weapons must be agreed upon by two people, the captain and the political officer. Under certain conditions the captain and the political officer could do this without permission from Moscow, if they lost all communications with Moscow and believe World War III has started. B-59 had lost all communication with Moscow and believed World War III had started.

A desperate captain and the political officer gave the order to prepare the “special weapon,” a nuclear torpedo capable of wiping out a good chuck of the American battle group stalking them. There was just one slight complication. The story goes that there happened to be a Soviet fleet admiral on board, in charge of all four of those Russian subs, and he was using B-59 as his flagship. Now the regulations required that all three senior officers approve the use of the “special weapon.” The admiral did not approve, and apparently said “nyet! I am not going to be the one to blow up the world today.” Instead, he ordered the sub to the surface to evaluate the situation and discovered World War III had not yet started.

More ‘what ifs.’ What if Hitler had become a successful painter? What if the Titanic had enough lifeboats, or what if there had been no admiral on board B-59?

Then there was this. While President Kennedy and Nikita Khrushchev continued negotiating an exit strategy, things were rapidly getting out-of-control on the island of Cuba itself. Believing American airstrikes were imminent, and they were, Fidel Castro ordered his troops to fire at American aircraft. Soviet field commanders adopted the same policy. Another U2 spy plane, this time conducting aerial reconnaissance over Cuba was shot down. The American pilot was killed, and a lot of people close to Kennedy wanted him to abandon negotiations and strike back immediately. Another president might have, like a Lyndon Johnson or a Richard Nixon, but JFK wanted more information surrounding the shootdown first.

When Khrushchev found out somebody had shot down an American U2 spy plane over Cuba, he went into a panic. With no time to spare he immediately sent a message to Kennedy over the international broadcasting service of Radio Moscow, thus avoiding slow moving diplomatic channels. He needed Kennedy to know right away, before he could respond militarily to the shootdown of the U2 plane, that he was pulling those missiles out of Cuba.

It was also sheer luck that one of those military mistakes didn’t start World War III. Sixty years later, the risk of a nuclear war is again raising its ugly head. A Russian leader is again making threats, but unlike Nikita Khrushchev, Vladimir Putin is unstable.

It wasn’t disclosed until years later, and President Kennedy didn’t know this, but had the Americans attempted to invade Cuba, tactical nuclear weapons were available to Soviet ground troops, and they were operational with a destructive force 100 times more powerful than the bombs that fell over Hiroshima and Nagasaki. Had an American invasion force approached the beaches of Cuba, their ships would have been destroyed and the men aboard them vaporized before one person ever entered a landing craft.

Cold War Veteran Brian Bird of Little Current served aboard one of those ships. HMCS Columbia.

And so ended the Cuban Missile Crisis. As one historian defined the crisis, “it was not only the most dangerous moment of the Cold War, it was the most dangerous moment in human history.” Thirteen days of white-knuckle tension, from Tuesday, October 16 to Sunday, October 28, 1962. By the way, on Monday, October 29, 1962, the day the airstrikes and invasion would have started had Kennedy and Khrushchev not cut a deal, and very likely the same day the missiles of October would have struck their targets over North America and in the Soviet Union, instead, Kagawong got to host its annual Halloween masquerade dance. Admission: 75 cents plus lunch. 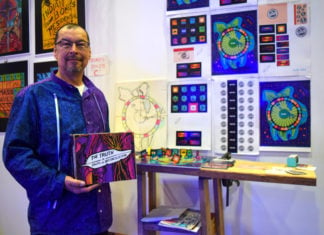