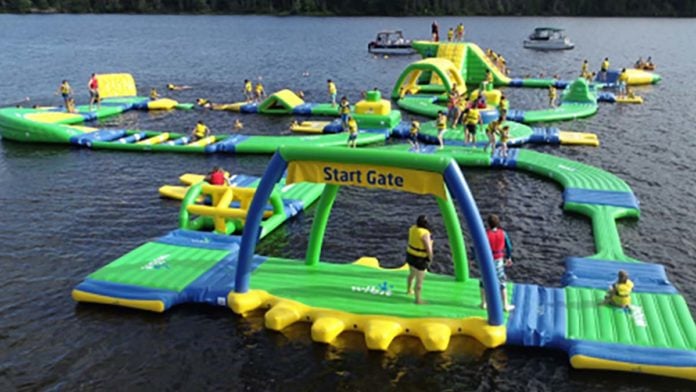 ﻿GORE BAY—Splash N Go Adventure Parks Limited will now be setting up and operating the very large, inflatable waterpark in the bay at Gore Bay this summer after unforeseen circumstances caused a delay in getting started.

“Originally, we had planned to launch (the waterpark) on June 25 in Gore Bay,” Mike Lafreniere, owner of the business, told The Expositor Friday. “But when we found out that the town fireworks were going to be held off the breakwall in town (July 1), close to the area (about 50 feet) where we are going to be locating the waterpark, we delayed the opening of the park until July 9.  Our park is made up of big inflatable balloons and all it would take is one ember from the fireworks to land on one and it would pop the balloons. Everyone is just excited about getting things going.”

“So we decided to push the opening back a little bit,” said Mr. Lafreniere. “As soon as we had set the new date for July 9, we sent emails to everyone who had purchased tickets, informing them that they had the options of rescheduling or receiving a refund.”

Mr. Lafreniere had explained previously that at the centre unit of the water park is a really cool obstacle, basically a big rolling log, which connects both ends of the park. In a location in Europe, they held a contest with a similar waterpark with 60 people trying out the obstacle with only four people making it across the rolling log. It can be as much fun watching those trying to get through the waterpark as those who are using it.

“We will be in Gore Bay daily from July 9-31,” Mr. Lafrienere told The Expositor. There is an option to remain for the entire summer (end of August) at the company’s discretion as well.

Splash N’Go will be providing lifeguards with the Lifesaving Society of Canada to supervise the waterpark at all times and be responsible for security and securing the park.

Each session open to the public is for 1.5 hours. “That doesn’t sound like much time, but keep in mind those using the waterpark are constantly running, jumping and climbing. It is like going non-stop at the gym,” said Mr. Lafreniere.

The Gore Bay waterpark is a brand-new custom-designed park with features exclusive to the area, offering a different set of challenges and obstacles than the Chelmsford location, a release explains. The waterpark is suitable for ages five and over and this floating obstacle course is perfect for the whole family to enjoy.

During operation, the park will be hosting four, 1.5 hour sessions throughout the day. Passes are available for purchase via the Splash N Go Adventure parks website.