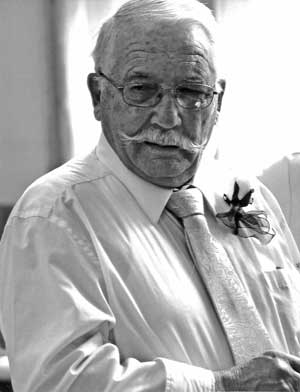 Stanley William Gordon, of Kagawong, passed away peacefully with his family by his side on Saturday, April 11, 2015 at Manitoulin Health Centre, Mindemoya in his 86th year. Beloved husband of Jacqui and dear father of Peter (Patti), Rory (Karen), Janyn (Greg) Towns, Todd, and Skye (Richard) Pilon. Stan will be sadly missed by grandchildren Robyn (Clayton) Best, Erin (Zsolt) Toth, Lauren (Travis) Dewar, Ashley (Tom Hayes) Gordon, Jason Gordon, Myles (Keara McGuire) Towns, Quinn Towns, Faira (Kyle Royal) Dewar, Carson Dewar, Will Gordon, Hannah Gordon, great-grandchildren Corbin and Brynn Best, Finnlay Dewar, Zsazsa Toth, as well as his brother Bruce (Helen) Gordon, brother-in-law Floyd Graham and special friend Beth Gordon. Predeceased by his parents William and Jessie (McDougall) Gordon, stepmother Leila (Sloan), brother Elmer and sister Jessie Graham. Stan worked for Ontario Hydro for 38 years, all based in Kagawong. When the Manor was under construction, Stan was a Board member, and helped out diligently. He was the Church treasurer for 38 years as well as being on many, many Church committees. Stan was also Santa Claus for the community for years and years. He was fond of sports, playing hockey from 1945-1955 for the Senior team in Gore Bay, enjoyed curling, baseball (both to watch and play) and soccer to watch. Stan loved to dance and was fond of country and bagpipe music. He was a professional teaser and practical joker. Stan was a long and respected member of the Gore Bay Masonic Lodge #472 for 60 years reaching the position of Deputy District Grand Master, Spanish River Eastern Star #287 for 55 years (Master for 6 times) and the Shriners. He also belonged to the Royal Arch and Templar lodges. Stan was passionate about his grandchildren and great-grandchildren, and loved to tease and joke with each and every one of them. They were a source of delight for him right to the end. Visitation will be held at the Culgin Funeral Home, Gore Bay, on Monday, April 20, 2015 from 2 pm to 4 pm and 7 pm to 9 pm. Spanish River Chapter #287 of the Eastern Star will hold a service at 2 pm and the Gore Bay Masonic Lodge #472 service will be held at 6:30 pm. The funeral service to celebrate Stan’s life will be held at the Lyon’s Memorial United Church, 17 Meredith Street, Gore Bay on Tuesday, April 21, 2015 at 11 am. As expressions of sympathy, donations may be made to the Canadian Diabetes Association, Mindemoya Hospital Auxiliary or Shriner’s Hospital. www.culginfuneralhome.ca.