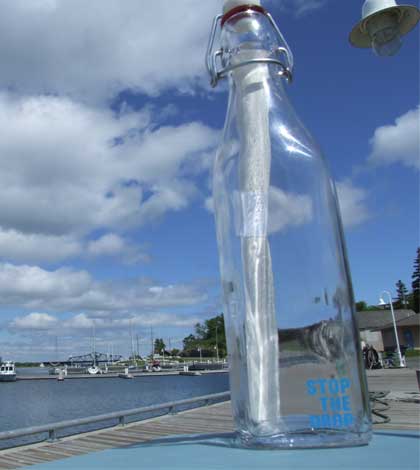 GEORGIAN BAY— “Already over 20,000 people have registered with Stop the Drop because they want to send a message to their elected representatives,” says Colin Dobell, executive director of Stop the Drop. “The long term decline in Lake Huron water levels concerns them deeply. Our job is to help our members channel their concern so it gets heard. As politicians realize how many people really care, they respond.”

This week, Stop the Drop is inviting members to express their concern that the federal government has not responded to advice it received in April. At that time, the International Joint Commission recognized the long-term issues with Lake Huron water levels and advised specific action be taken to address the problem. But seven months later…no response from government.

By collecting the appropriate contact information for them, Stop the Drop enables members to communicate with their elected representatives in less than three minutes. “This is an important exercise,” says Mr. Dobell. “Hundreds or thousands of voices speaking together have influence. But that influence will only be felt if people take those few minutes to express themselves. We make it very easy and quick, but folks still must choose to take action.”

Since Labour Day, Stop the Drop has been meeting with the 18 municipalities, five MPPs, and five MPs who represent the shoreline of Georgian Bay, sharing information about how many and what kinds of people registered to express their concern.

“We’re now reaching the next stage of this effort,” says Mr. Dobell. “We’re reaching beyond the Bay to help our members communicate with every politician who represents them wherever they live and vote. For example, we have over 2,000 members living in the GTA, another 2,000 in southwestern Ontario. Many politicians who represent our members have never heard of the problem, but they represent citizens who care deeply about the Bay, so it is their problem too.”

If you haven’t taken the time to register at www.stopthedrop.ca but are concerned about low water levels, please do so (it’s free), Mr. Dobell urges. The community is designed to make it easy for members to “get informed, get heard and get involved” in support of long-term action on water levels. Stop the Drop also makes public opinion on this issue visible so that our leaders can understand how many people care, and how members think and feel about water level issues.