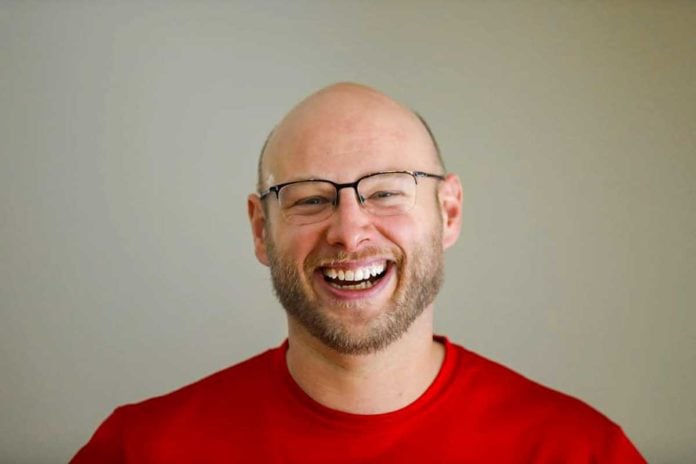 EDITOR’S NOTE: Diane Sims was the editor of The Manitoulin Expositor in the late 1980s and when she learned of plans of Matthieu Bonin to swim around Manitoulin Island this summer to raise awareness for people living with multiple sclerosis (MS) she leapt at the opportunity to report on Mr. Bonin’s motivation and progress. Ms Sims was diagnosed with MS at age 18 and has enjoyed a productive life and a variety of careers, including publishing five books. Ms Sims is a native of Sault Ste Marie and currently lives in Stratford where she is a vociferous advocate on access issues on behalf of citizens with mobility concerns. This is the first part of an ongoing series that will follow Mr. Bonin and is titled, ‘Swimming for MS.’

SUDBURY—Matthieu Bonin’s strokes for multiple sclerosis (MS) are mere weeks away with his mission to swim the 350-kilometre circumference of Manitoulin Island.

The 35-year-old Sudbury swimmer sees this swim as a message for those living with MS, a memorial for a cherished aunt who died from MS complications and a means to raise funds to cure this debilitating neurological disease.

Matt, as he asked to be called in a video interview, said his “main message is inspiration and hope for people struggling daily with MS.”

“I just want to help people. I go to dark, difficult places and try to bring light and I think MS is a very dark place,” he explained when I asked what makes him “tick.”

Canada has one of the highest rates of MS in the world with approximately 90,000 Canadians living with this disease. Most people are diagnosed between the ages of 20 and 49. For full disclosure this writer also has MS, was diagnosed at age 17, and am in an electric wheelchair.

Matt’s inspiration is his mom’s sister whom he watched deteriorate and eventually die with MS.

“I want to do this in memory of my Aunt Claire. She would just light up when we visited but I saw it take everything, her ability to walk, talk and at the end she was basically a prisoner in her own body,” Matt stated.

“Really her spirit is fuelling the swim,” he added.

Matt left his job as a high school math and sciences teacher to train for this voyage that begins July 1 as he steps into the North Channel off Little Current heading clockwise around the Island. He’s given himself a month. Matt swims between 20 to 70 kilometres a week in a weekly training schedule.

“Quitting my job was a sign to me how committed I am to MS,” said the man who only began swimming two years ago.

“A community-hosted event like Matt is doing, the funds he’s raising, will allow us to invest in research and services that are fundamental to changing lives,” she told me in an interview from her Toronto office.

Matt isn’t new to open-water swimming or achieving his goals. Last summer he swam 20 lakes for a fundraiser then swam Lake Wahnapitae as a fundraiser for NEO Kids in memory of his friend’s son, Evvy, who died at age three-and-a-half.

But it was swimming in McGregor Bay when he fell in love with Lake Huron.

“I feel a real spiritual connection in that water,” explaining he goes into a Zen place of “joy and contentment with myself and the water.”

Matt knows how tough it is to fight, like people with MS he affirmed.

“I’m pretty open about this. I struggle with pretty severe depression. I’ve felt trapped in my body. I believe in a higher power and that’s where I get my spiritual connection.”

Sandy Stretch is the MS Ambassador for Sudbury-Manitoulin, a program through MS Canada offering peer-to-peer support for those newly diagnosed or any with MS.

“I think it’s amazing what Matt is doing. It’s a strive to show our strength. It’s like he’s going to have MS for a month. He can’t quit because we can’t quit (the disease),” she emphasized.

Matt’s declared fundraising goal is $100,000, just $1 for every Canadian with MS. However, he prefers to quote Toy Story’s Buzz Lightyear saying the goal is “to infinity and beyond!”

“I’m not going to limit myself. I’m pointing to a world free of MS,” he told me with confidence.

But why choose Manitoulin, the largest fresh-water island in the world, I queried?

Last summer Matt’s friend, Richard, cycled the Island with Matt following in a car. He loved the beauty and the idea came to him.

“I wonder what it would be like to swim around this island?” he mused.

It seems like a cast of thousands has surrounded Matt from several open-water and distance swim coaches, a sports nutritionist, a sports psychologist, a sports therapist, a strength coach, half a dozen working on logistics plus the fundraisers. Matt will have both a boat and ground crew accompanying him stroke by stroke.

“I’m absolutely floored by the team I have. We’ll be achieving the impossible,” he attested.

Fatigue is one symptom Matt will be battling that those with MS fight daily.

MS is extremely fickle, I’d say, causing symptoms of extreme fatigue, lack of coordination, weakness, tingling, impaired sensation, vision and bladder problems, mobility loss, cognitive impairment and mood changes. So, its effects are physical, emotional and because so many of us must leave work and take pricey medication, financial.

It is an autoimmune disease of the central nervous system including the brain, peripheral nerves and notably the optic nerve. The disease attacks the myelin sheath, that’s like insulation around an electrical cable. Damage can be slight with minor interruptions. However, continued damage may completely disrupt impulses with the nerve fibres, like the electrical cable, eroded.

The cause of MS remains a mystery, but Matt is clear he’ll swim for all of us.

What’s next for Matt?

“The swim will fuel the next chapter of my life which is to talk about depression,” he declared.

Future installments in this series will deal with Matt’s further preparation and, of course, the swim.