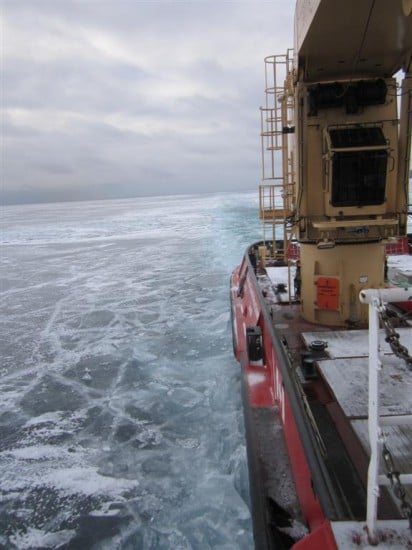 MCGREGOR BAY—The Canadian Coast Guard ship Samuel Risley was back in northern Georgian Bay waters last week, signaling the beginning of the spring maritime shipping season and, with it, bearing good news too.

The Expositor spoke with Chief Officer Al Morris from the Samuel Risley while the ship was anchored in McGregor Bay. The vessel had cut a swath of ice through north Georgian Bay into the Fraser Channel and into McGregor Bay with the help of the United States Coast Guard cutter Katmai Bay which was on hand to facilitate the safe passage of the commercial US vessel Alpena heading to the Lafarge port.

Last year, The Expositor spoke with the Commanding Officer of the United States Coast Guard ship and learned that there was little to no ice coverage in north Georgian Bay. This year, it’s a completely different story.

“As far as ice coverage, it’s more of a normal winter,” Chief Officer Morris said. “From Squaw Island, north and east, it was pretty solid into the Fraser Channel and into McGregor Bay.”

The Samuel Risley made one pass through, but was going to make a second, wider pass through the ice to aid the Alpena’s journey.

“In some places the ice was 10 inches thick to one foot and even two feet,” the chief officer added, noting that the ice would have helped to decrease the amount of evaporation from Georgian Bay over the winter months and thus help to slow the reduction of already low water levels.

Chief Officer Morris reminds the snowmobiling and ice fishing public that now that a track has been established across the ice, it’s not likely to refreeze and the utmost of care and caution should be taken when travelling the ice as the track can become invisible with snowfall.

“The whole ice sheet can be compromised after we’ve been through,” he added.

The chief officer thanked international partners the United States Coast Guard for a “well-coordinated effort” and spoke of the two countries’ cooperative relationship.

After leaving McGregor Bay, the Samuel Risley was bound for a date with the US cutter Mackinaw through the Sault Ste. Marie locks to open up the Thunder Bay harbour. 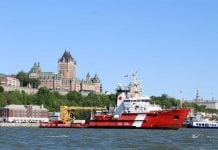 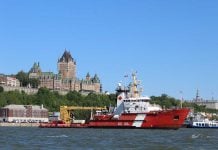 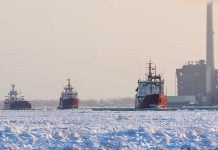