LITTLE CURRENT – Manitoulin Island’s first-ever fast food franchise, a Tim Hortons in Little Current, opened for eager customers this past Monday, October 26 in drive-through mode only, with a few finishing touches yet to come before the indoor dining room opens for a reduced seating capacity in line with pandemic protocols.

“It’s super exciting. It’s been a long time coming. We’re excited and I’m sure we’ll be busy all day,” said Denis Lefebvre, franchise owner of the new Tim Hortons, who also owns locations in McKerrow, Blind River and Espanola, with a new one to come in Thessalon early next year.

The Thessalon and Little Current locations were supposed to come online around the same time but the Island franchise managed to stay closer to the intended schedule.

“We might have a couple little bumps in the road with our growing pains, especially during a pandemic, but we’ll get them ironed out and we’ll be good in no time and able to offer even faster service,” he said.

Mr. Lefebvre has been trying to get an Island Tim Hortons in operation for about 10 years. Plans to create a franchise near the Manitoulin Welcome Centre ultimately failed in 2016 but further discussions with Island developers Jim and Patrick McBane of Streetwise Holdings led to the final location at the corner of Draper Street and Manitowaning Road. Mr. Lefebvre knew the senior Mr. McBane previously.

The Little Current location uses a new-for-2020 restaurant design called ‘Welcome Home;’ it has become the second restaurant in Ontario to have the new theme.

The inner surfaces feature earthy tones and warm lighting shines both inside and out. There will be plenty of soft seating but much of it is temporarily blocked off to promote physical distancing.

Patrons hoping to get treats from the restaurant will have to use the drive-through for now. The franchise owner is still waiting on his front door which has been repeatedly delayed from its manufacturer due to COVID-19 work backlogs. Mr. Lefebvre said he was hoping to have the door in place and to welcome customers inside by early November.

Construction has been continuing at a steady pace. On Monday, October 19, the signpost went up. Dr. Signs Sudbury manager Dennis Rivet completed the electrical hook-ups with help on the ground from Jim Anderson, who moonlights as Elvis Presley impersonator ‘Gospel Elvis.’

Through the front doors will be two large electronic self-ordering screens for customers who wish to use them. This is Mr. Lefebvre’s first location to have such technology and he said it may be useful if someone just wants a coffee, as they might bypass people with larger orders ahead of them.

“You’re going to get the great service and great product you expect. We’re known for our fast, friendly service and good quality at a fair price,” said Mr. Lefebvre.

The prospect of a fast food franchise coming to Manitoulin has met mixed reviews—proponents celebrate the added jobs (30 new hires, 20 of which are full time) and added choice, while detractors worry that allowing a chain onto Manitoulin may take away from the special older-world feeling of the Island and take business from family operations, such as Loco Beanz Coffee House with its three Island locations.

“Manitoulin Island is a special place. We understand the mixed feelings and some people’s concerns but all I can say is we will be a part of your community. We do so many super things in the communities we’re in, like Timbits soccer, Timbits hockey, smile cookies, camp day and supporting local causes,” said Mr. Lefebvre. “The little shops are special to a lot of people and they’ll continue to go to their establishment of choice, but we welcome everyone here and we hope every business can succeed.”

Tim Hortons will be open daily from 5 am to 11 pm. In the warm months, it will offer outdoor patio seating for 24 people; indoor capacity during non-pandemic times is approximately 50 seats.

The first customer to use the drive-through on opening morning was Little Current’s Ian Wilkin, who hopped a curb and snuck in before this reporter could snap a photo of him placing his order.

“It was pretty cool to be the first,” he said. “Anybody who knows (my wife) Cheryl and I wouldn’t be surprised I was first.”

He said he was not too picky about his coffee choices but he would certainly still support independent food sellers such as Loco Beanz for lunch. He added that it was positive to see so many jobs added to the community.

Mr. Wilkin launched a humorous ‘auction’ online for the first cup sold at the Little Current drive-through. Bids quickly jumped from three Timbits to three doughnuts, where they stalled at press time Monday.

He was supposed to start his shift at The Beer Store at 10 am, the same time as the restaurant opened, but he bribed his coworker with one of the prestigious first coffees in exchange for showing up a few minutes behind schedule.

Mr. Wilkin followed the Tim Hortons news closely. The original location was supposed to be next to his workplace but ultimately fell through when transportation officials mandated a considerable road redesign. His cousin’s husband builds Tim Hortons restaurants, though his company was unsuccessful on this project.

What was the storied first order of the new restaurant?

“Three coffees—one double-double, one regular and one with just cream. I should have gotten a doughnut,” he said with a laugh.

Mr. Lefebvre fell into the Tim Hortons world organically. His father, a builder, priced the construction of the Espanola franchise in 1996. He found out that there was no franchisee lined up and the Lefebvre family agreed to take it on. October 21 marked the 24th anniversary of the Espanola location within the family.

They opened McKerrow in 1998, then a location in Blind River in 2017. Little Current is their fourth location and Thessalon will be the fifth, with a target opening date of February 2021. 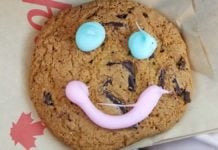