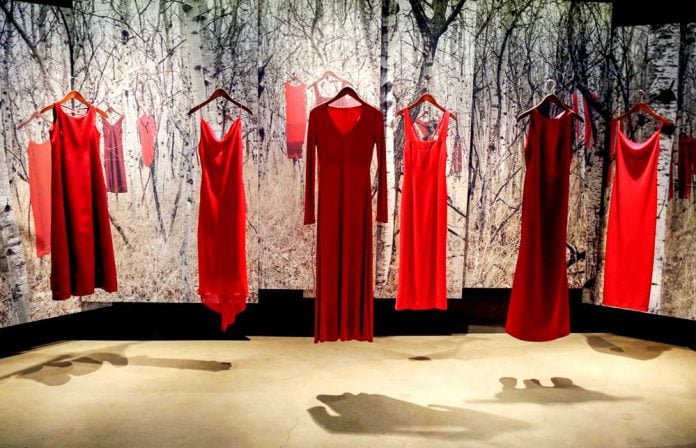 My wife and I recently attended a national entomology conference in Winnipeg, Manitoba. Our hotel was near the intersection of Portage and Main, a 20-minute walk from the National Historic Site known as The Forks, which is also the location of the new Canadian Museum for Human Rights (CMHR).

We visited the Museum during our stay and since it highlights issues important to all Canadians, including those of Manitoulin Island, I summarize here what we saw and learned from the exhibits, along with additional information I found on the Internet.

The mandate of the CMHR is to explore the subject of human rights with special, but not exclusive reference to Canada. However, the Museum exemplifies Canada’s commitment to freedom and democracy as it aims to encourage reflection and ignite an informed, ever-evolving global conversation. The Museum does an excellent job of encouraging all the world’s people to respect the human rights of others.

As the only museum in the world solely devoted to human rights awareness and education, the CMHR has become a beacon for visitors from around the world. 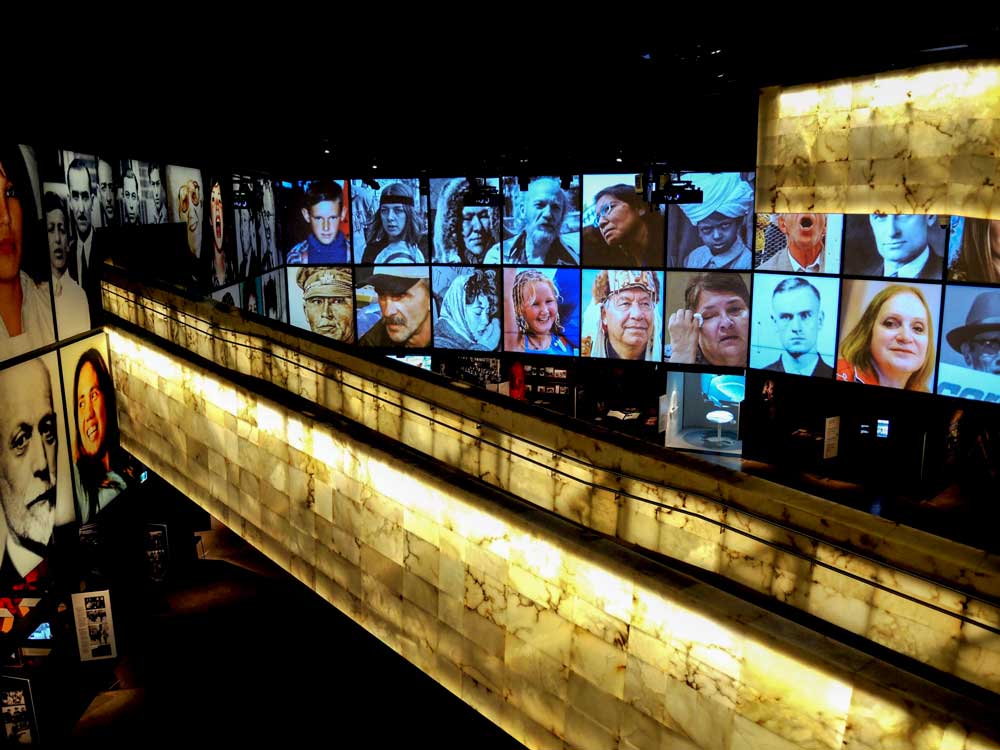 Displays throughout the Museum explain how human rights are moral principles that describe standards of human behaviour. We learn that human rights are the fundamental rights to which a person is inherently entitled simply because she or he is a human being regardless of skin colour, language, sexual orientation, religion or ethnic origin.

Well-designed displays explain how people have grappled with ideas about human dignity, respect and responsibility throughout our history. My wife and I were not aware that many of the basic ideas that started the modern human rights movement occurred after the Second World War and the events of the Holocaust.

We are reminded that our politicians must still bring up human rights when meeting leaders of certain countries where the doctrine of human rights continues to provoke scepticism and debate about its content, nature and justification. 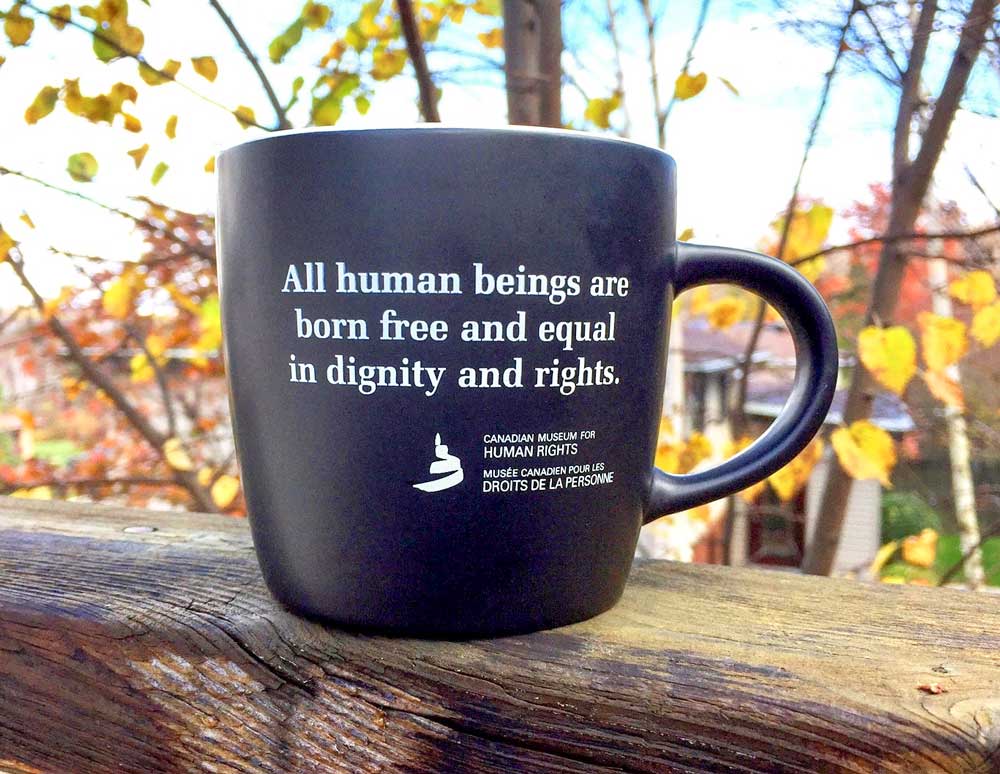 We learned that laws in Canada protecting human rights stem from the Universal Declaration of Human Rights, adopted in 1948, when the international community came together to make sure human rights laws were written and understood so that the horrors of World War II would never happen again.

The Canadian Charter of Rights and Freedoms of 1982 became part of our Constitution and protects the rights of every Canadian to be treated equally under the law. Our charter guarantees fundamental rights such as the freedom of expression, freedom of religion and freedom of assembly.

The building is magnificent.

The building that houses the Museum stands at the place where the Red and Assiniboine Rivers meet. Indigenous peoples have been connected to these ancestral lands for thousands of years, and as well, travellers, traders, workers, immigrants and activists have been meeting here for centuries. 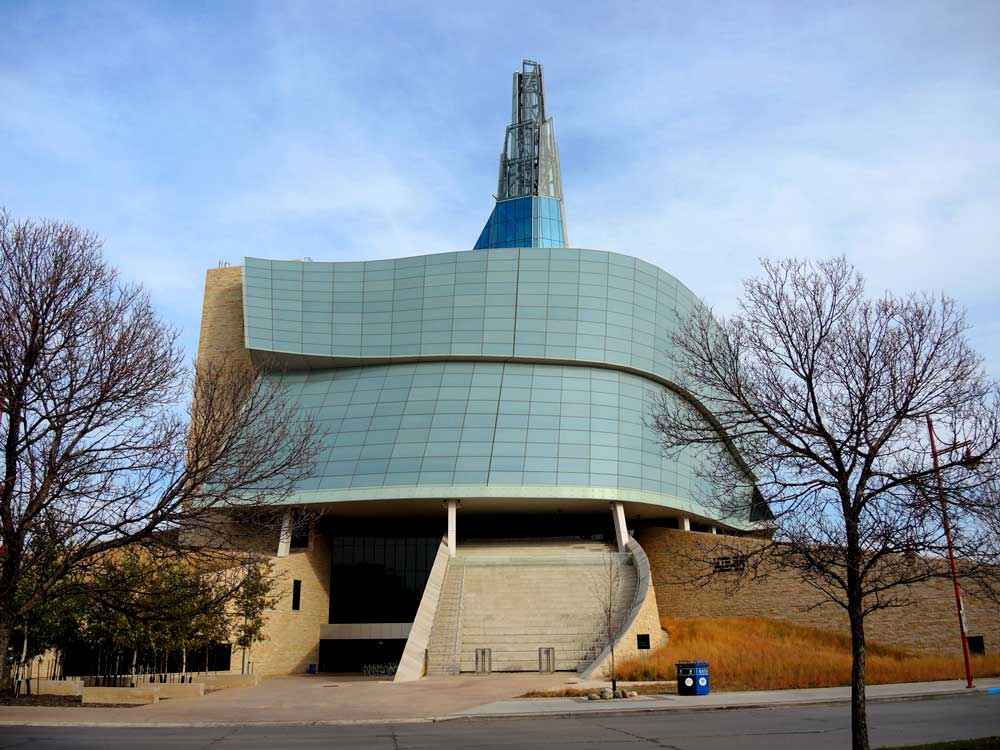 Throughout its construction, the Museum recognized that the building sits on ancestral Treaty One Territory and in the heartland of the Métis nation. To many, the site is considered sacred and as a means of showing respect for Mother Earth, medicine bags made by elders were inserted into the holes made for the piles and caissons.

The building is an architectural masterpiece that rises into the Winnipeg sky to the height of a 23 story building. It is cone-shaped, and in an abstract way, the glass-enclosed front represents the wings of a dove while the back is embraced by a mountain of 450 million year old limestone.

The building was designed by American architect Antoine Predock to simulate a journey progressing from ground to sky. Visitors are subjected to darkness with the entrance descending into the earth and then directed upwards towards the light through a series of vast spaces and ramps—a metaphor for the struggle towards fully realized human rights.

The route upward in made by a series of stunning concrete ramps clad in pale alabaster that crisscross in an irregular pattern the open spaces between the floors. Alabaster is a translucent rock from Spain cut about 2 cm thick that create glowing, magical pathways.

There are 8 distinct levels in the building with10 core galleries that highlight diverse stories of human rights from Canada and around the world using interactive presentations and multimedia technology.

The first level is a large meeting hall carved into the earth where your journey begins and finishes. The hall is both intimate and grand, intended to evoke memories of ancient gatherings, resonant with human community and kinship.

A large gallery on level two provides a timeline of 100 key moments in the history of human rights from around the world. There is a multimedia show featuring people talking about their own perspectives on human rights. There is information here on Indigenous perspectives on concepts of rights and responsibilities of First Nations, Metis, and Inuit peoples. There are also other Canadian examples of steps and missteps on our road to greater rights for everyone.

Level 3 describes the legality of Canadian human rights while level 4 is devoted to exploring mass atrocities and genocides such as the Holocaust, exploring how the Nazi government used laws and violence to deprive people of their rights as citizens and humans. 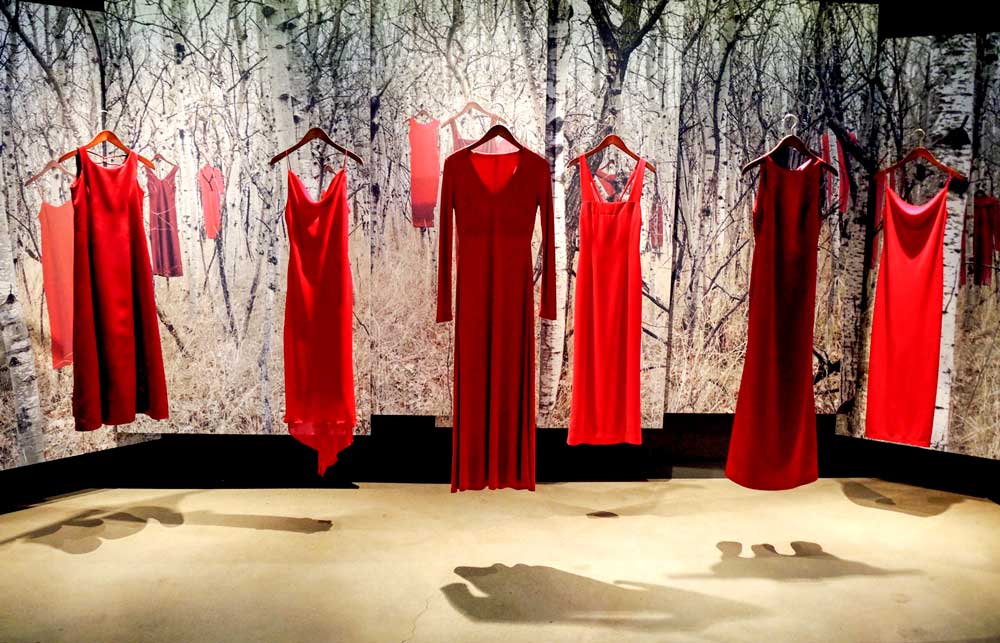 Displays on Levels 5 and 6 show how human rights are constantly changing and how awareness, critical thinking, and deep understanding are needed to determine effective action. Level 7 provides an opportunity for visitors to contemplate their own role in building a better world for all people.

Level 8 is the Tower of Hope, the highest part of the building with a platform that provides a panoramic view of the surrounding area. It is accessed via an elevator or winding stairs, but a warning, people who are prone to dizziness, fear of heights, or riding in a glass elevator may not be comfortable here.

Aboriginal issues are addressed throughout the building, but are prominent in the ‘Canadian Journeys Gallery’ and the ‘Indigenous Perspective Gallery’. By presenting diverse stories about violation, survival, and residential schools, the CMHR encourages visitors to learn from the past and present and enter into conversations about our future together.

The work of the Truth and Reconciliation Commission of Canada is examined in the Inspiring Change gallery and elsewhere, which is augmented by school-based programs about residential schools and reconciliation.

There are also several pieces of Indigenous art that relay messages about human rights, including a haunting display of empty red dresses to remind us of murdered and missing Indigenous women.

Other galleries describe the Chinese head tax, the underground railroad, the treatment of Japanese during World War II, protecting rights in Canada, the Holocaust and other genocides.

History of the Museum

The idea to establish a museum in Canada devoted to human rights began in 2000 and is attributed to Israel Harold Asper, known as Izzy Asper, the founder of Canwest Global Communications.

Asper was a business leader and philanthropist and envisioned a museum where people would come to learn about and gain an appreciation for human rights. Unfortunately, Asper died before seeing his dream come to fruition, but his family carried on the mission and played a key role in developing what we see today.

Raising money for the structurally complex building took many years starting in 2008 with the governments of Canada, Manitoba and Winnipeg joining with The Forks Renewal Corporation, labour, and the Friends of the CMHR  together raising about $350 million to complete the project. Construction began in 2009 and the building opened in 2014 becoming the only federal museum built outside the Ottawa area.

By the end of a tour, visitors come to understand that the purpose of the Museum is not to be a memorial for the suffering of peoples in the past, but a learning experience providing direction for our path to the future. Visitors are taken on a journey of inspiration and leave having experienced the power of human rights. Plan a vacation to Winnipeg so you can visit this amazing Museum.

I thank Louise Waldman, manager of communications and marketing, at the Canadian Museum for Human Rights for examining a draft of this article.

Joe Shorthouse is a retired biology professor at Laurentian University, a summer resident of Manitoulin Island, and a frequent contributor to The Manitoulin Expositor.