﻿MANITOULIN—A small group of First Nation walkers who all have missing and murdered family members were on Manitoulin Island to relax and take in the Wiikwemkoong powwow this past weekend, before continuing their 10-month journey, “Krista’s Kilometres for Murdered and Missing Indigenous Women (MMIW).” Their goal is to bring awareness to the severity of the human rights crisis surrounding Murdered and Missing Indigenous Women and Girls (MMIWG).

“As tough as it is to belong to the MMIWG (Missing and Murdered Indigenous Women and Girls) family, there is no better support then from other people who are sharing the same grief. It all boils down to keeping the names of all those Indigenous people who are missing or have been murdered out there,” stated Krista Fox, who along with Lindsey and Derek Bishop and Dianne Morin, are on a 10-month journey to spread the word about violence against indigenous women. “It is connecting families, and when I have a particularly bad night for instance I can message a lady in B.C. who has also lost a family member who understands what I am going through and tells me, ‘I know how you feel.”

“One minute you can be celebrating the best time of your life, and then memories come back of a loved one who is lost,” said Ms. Fox of North Battleford, Saskatchewan, whose 14-year-old grandson was murdered in Saskatchewan in 2020. “One day you can be happy and positive and then you acknowledge, and are heartbroken. No one understands better than a family member who has gone through the same thing.”

Ms. Fox, along with Lindsey and Derek, passed through Espanola last week, making their way to outside of Espanola on their way to Manitoulin, where they were greeted and met by Mary Dantouze, Isadora Bebamash and Alma Jean Migwans (all from Manitoulin), who met the group and put them up for the long weekend and presented them with money raised through a recent fundraiser.

Ms. Fox is 54 years old, a mother, wife and grandmother. “I started as an advocate when a close family friend, Ashley Morin, went missing on Monday, July 10, 2020. “Dianne, who is Ashley’s mother, adopted me into their ‘family’,” she said. She explained that married couple Lindsey and Derek Bishop are both from Saskatoon, and met as part of a support system group in Saskatchewan.

“In March 2021, I decided I was going to walk across Canada to bring awareness, and Diane said she would be coming with me. Lindsey and I communicated back and forth and when I told her about the walk, she told me, ‘I am going as well.”

Lindsey’s sister Megan Gallagher has been missing since September 19, 2020.

“As I mentioned, I started talking about fundraising for a walk last year,” said Ms. Fox. “Tik Tok really helped and I was able to meet some really beautiful people through this.” The 10-month journey started on February 3. “On February 18, which was my 54th birthday and should have been my grandson’s 16th birthday, we reached Beacon Park in Victoria, British Columbia at the Canada Mile Zero sign, and we will continue until we reach St. Johns Newfoundland, the first week in December.”

“None of us (walkers) are blood related,” said Ms, Fox. “The unfortunate events we have been through have brought us together. We support each other, like brothers and sisters who have all bonded against the monsters who have taken our loved one’s lives.”

“Dianne (Morin), who has been with us on the entire walk, had to drop out the first of July, and will be with us again this week,” said Ms. Fox. “Derek and Lindsey started with us in Victoria, B.C.”

“We are fundraising, but we are using the funds to keep going, for gas, food, and lodging,” said Ms. Fox.

From Manitoulin Island the group, “is travelling to Sudbury, and then we will be heading to Toronto where our leaders and all our smaller organizations are planning a get together in Ottawa. We are hoping to be able to sit down with Prime Minister Trudeau at that time.”

“I think the biggest message we want to get across is this has to stop  and steps need to be taken to do this,” said Ms. Fox. These issues were addressed in the Truth and Reconciliation Calls to Action. “This came out three years ago with recommendations. My heart bleeds for the families who were involved. I can see them at the table, going to Ottawa, pouring out their hearts about loved ones missing or murdered and coming out of this saying yes recommendations have been made, and someone is actually going to listen and that these murdered and missing persons do matter. They poured out their pain and suffering, but three years after the recommendations, nothing has changed. The families feel enough is enough.”

The three Anishinaabe-kwe who greeted the walkers, Mary Dantouze, Alma Jean Migwans, and Isadora Bebamash, “had a drumathon for them last Saturday (July 23,) in M’Chigeeng,” said Ms. Dantouze. Along with the three ladies, Matthew Assinewai and Terry Debassige also took part in the drumathon, with help from Oscar Corbiere, who made soup and sandwiches for the drummers. Dave Dantouze helped set up a display. The drumathon started at 1 pm and ended at 9 pm, with $1,100 raised for the walkers. 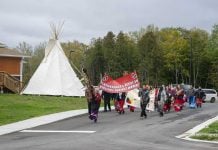 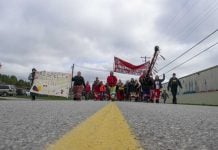 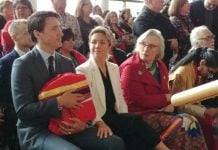 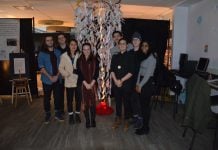 Shades of Our Sisters celebrates the lives behind the statistics 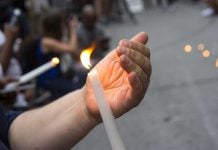 Missing and murdered indigenous women, girls inquiry will not expand to include men