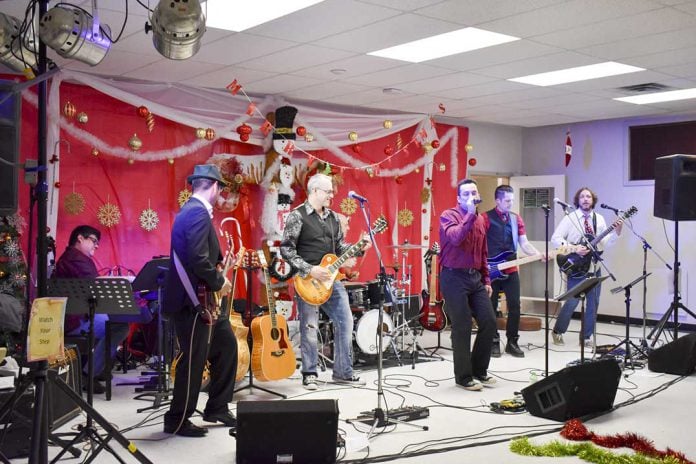 The telethon, which raises much needed funds to award bursaries to post-secondary education students through Enaadmaagehjik (O/A Wikwemikong Development Commission), is an opportunity for community members to showcase their talents and to gain confidence in front of a live audience.

Angela Peltier, administrative assistant for TV5 and lead organizer for the telethon, credits the many performers who perform on the show as a big reason for the pledges that are called in. Likewise, TV5 video technician Gordie Odjig, who has been involved with the telethon since its first year, says “it’s important to showcase community talent and to motivate people to work on their talent and to come out of their shell” just like one of the night’s young talents, Lena Trudeau, who was a first-time performer.

Lena, who performed ‘Walk the Line’ by Johnny Cash and ‘Someone Like You’ by Adele, said she was shy about performing. Nonetheless, she was excited about being a part of the telethon and had been practicing since she “first heard about the telethon.” After her performance, the eight-year-old singer feels pretty confident that she will be back to perform again next year.

Another performer, singer-guitar player Cassandra Odjig, who first performed “about 10 years ago” looks forward to being a part of the telethon every year. Ms. Odjig performed ‘Who I Am’ by country singer Jessica Andrews.

Other talent throughout the evening included Jason Manitowabi and Friends, a number of performances by Wiky School of Dance, Eugene Manitowabi, Shirley Peltier, Mark Beachey, Robbie Shawana and Holiday Express, as well as other impromptu performances.

Pat Peltier, lead singer for the house band, Holiday Express, said playing the telethon “was a blast and all the guys had fun.” He explained that while he, Chris Peltier and Brendan Peltier were in the house band for the telethon’s 20th Anniversary, it was the first time being a part of the house band for Andre Proulx, Aaron Blanchard, John Caselton and Pat Therrien. “They all had such a great time. They had friends from out of town watching via the Internet who also called in and made pledges.” Mr. Peltier credits Mr. Proulx with coming up with the band’s name “Holiday Express” for the show.

Both Ms. Peltier and Mr. Odjig herald the telethon as a good example of community spirit and expressed their gratitude to the community including “the team leaders and volunteers as well as the local area businesses who provide donations of food and drinks for the performers and volunteers.” These are the people who come together each year to make the telethon such a successful, long-standing event. They also said that “most of all” they are “grateful to the performers who lend their talent to the telethon, because without the performers, there would be no telethon.” Mr. Odjig also wanted to be sure to thank “the community members for tuning in and supporting the telethon all these years.”

The evening raised $1,650 in pledges. The MC urged pledge donors to stay off the “naughty list” by honouring their pledges.