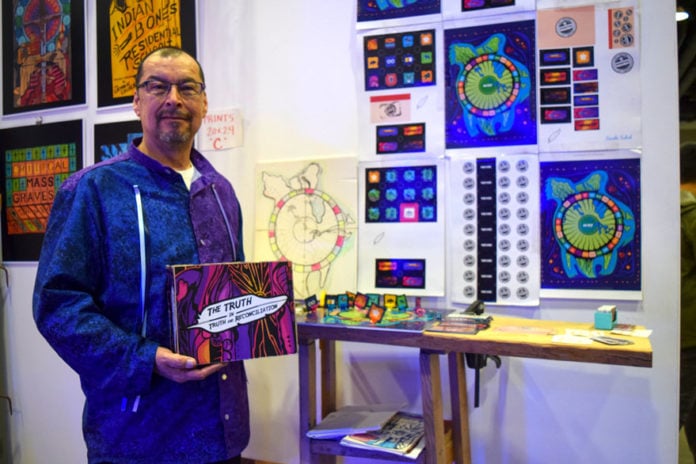 Former teacher designs game for use in schools

KAMLOOPS—Anishinaabe artist James Darin Corbiere has worn a lot of hats since he set out into the world from his home community of Wiikwemkoong, including as a police officer and secondary school teacher, and now, artist, working on white birch wood panels.

It was while working as a secondary school teacher in Sault Ste. Marie that Mr. Corbiere came up with the idea of creating a board game as a teaching tool about Truth and Reconciliation.

“I was a former police officer and a secondary school teacher in Ontario when the 94 recommendations of the Truth and Truth and Reconciliation Report came out in 2015,” he recalled. “The Ontario Secondary School Teachers Federation (OSSTF) was looking to put together a group of Indigenous educators to design a tool kit to teach Federation members.”

Mr. Corbiere applied to be one of those educators and he was chosen as one of eight Indigenous educators tasked with coming up with an activity to engage people.

“I created a trivia board game called the Truth in Truth and Reconciliation Game,” he said. “It is a trivia game that teaches about the true relationship between Canada and the Indigenous people who live here.”

In the end the OSSTF went with a puzzle design for broader distribution, but Mr. Corbiere went on to introduce the game to his students in May of 2017 as they were getting ready for their exams. “The kids loved it,” he said. In fact, many people seemed to think it was a great idea.

A couple of years earlier, Mr. Corbiere had embarked on becoming an artist and his artwork was incorporated into the game, adding an even more personal connection to the project.

“In October of 2017 I attended an educational conference in London,” recalled Mr. Corbiere. While he was in Southern Ontario a representative of an educational book publisher saw the prototype. “It was pretty rough,” he admits of that prototype. “I literally had cut and pasted it together.”

The game is a “trivia-style” game.

Meanwhile, the publisher of educational books was excited enough by the product that they took development a lot further.

They had never published a game before, according to Mr. Corbiere, but the company’s research indicated there was nothing else like Mr. Corbiere’s game out there that focussed on Truth and Reconciliation.

The company polished things up to professional game standard from the prototype mock-up and sent the game to its focus group. That is when the speed bumps started popping up.

“The test was with the separate school boards in Ontario,” he said. “But they wouldn’t buy the game.” The truth part of the Truth and Reconciliation game, it seems, was a bit too hot to handle.

“In the game there are church and Crown shame cards for the hurts that they caused,” he said. “The school board didn’t want children questioning why the church would get shame cards.” The publishing company lost interest in the project.

Undaunted, Mr. Corbiere was encouraged enough by the initial interest to consider going a different route, but self-publishing something on that scale was beyond his personal means. It would cost $20,000 just to set up for printing. The full tally to take the game to production and distribution would head north of a million dollars.

“So, I am looking for funders,” said Mr. Corbiere. He has set up a GoFundMe campaign with an ambitious goal of $1.5 million. “If there is a First Nation out there that is looking for a project with a lot of potential, this is not only for Canada. There are a lot of countries out there that were impacted by colonialism, there is Australia, New Zealand, all kinds of places where colonial powers impacted the Indigenous peoples. It could go international, and it is not just for schools—it is intended as a resource.”

Mr. Corbiere is hoping to get back to Wiikwemkoong sometime in the next six months to visit with family and old friends. “I haven’t been home since 2017,” he said.

A demonstration of the game and its original and current format can be found in a YouTube video featured on Mr. Corbiere’s website at easternwoodlandart.ca.

The GoFundMe campaign itself can be accessed through a link there or at gofund.me/ea8d4c9b.