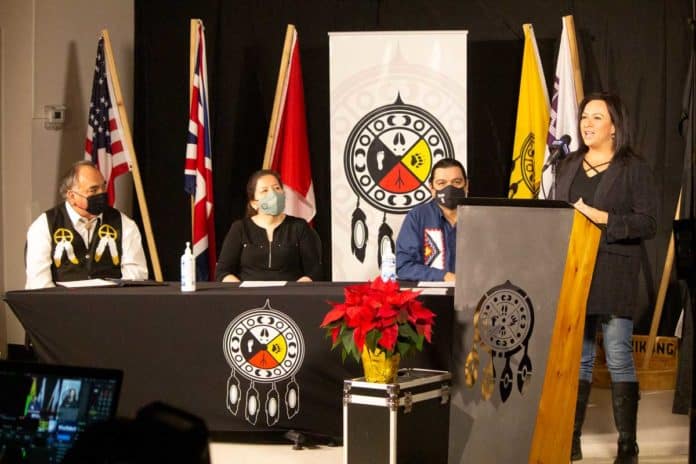 ﻿WIIKWEMKOONG—Wiikwemkoong Unceded Territories (WUT) has launched the Wiikwemkoong Long-Term Care Home (WLTCH) campaign to raise millions of dollars to build a new facility before its current licence expires in 2025, delivering a new home that meets the Ontario government’s 2015 design standards for its growing resident population.

“Our long-term care (LTC) home is an integral link to Wiikwemkoong and Manitoulin Island itself,” stated Cheryl Osawabine-Peltier, administrator of the home, in a December 21 press release.

“Our residents … are the pillars in our families. We need to keep them here—keep them ‘home’.”

In 2019, a feasibility study found that the only way the home could meet new LTC home standards (updated in 2015) would be a new build, one that would also increase its capacity to 96 beds from its existing 59.

Having more beds would increase the financial sustainability of the operation and offer residents and staff better conditions.

Wiikwemkoong musician Crystal Shawanda, who has been a vocal supporter of the nursing home, performed a Christmas concert following the Monday announcement. Following news earlier this month that Wikwemikong Nursing Home (as well as Manitoulin Lodge in Gore Bay) did not qualify for provincial rebuild financing, she has been working to lobby Ontario and raise awareness of the need for funding.

“It’s going to take the effort of all our community members to get involved and make this happen and to keep the momentum going,” said Ms. Shawanda.

According to a press release, a new nursing home build would cost approximately $28 million. The home is eligible for Ontario Ministry of Health and Long-Term Care financing worth $10.3 million, as well as a grant of $2.7 million. This means the community has to secure $15 million in financial support to cover the balance of the project.

Ogimaa Duke Peltier said the LTC facility is an integral part of the community and has long received plenty of support.

“Our (LTC home) has been here for 48 years and most of us have a direct connection to it as we’ve all had loved ones residing there at some point in life. If we don’t raise the funds needed, the facility will be gone, our elders will have to live outside of the community in other long-term care homes and jobs will be lost. We will not let that happen,” said Ogimaa Peltier.

The 2020-2021 capital fundraising campaign will work to secure contributions from the community, from the government, corporations and other groups and individual donors, as well as hosting fundraising drives.

In the new year, WUT will further expand its communications and outreach activities. It has already established several plans but said it will continue brainstorming for additional outreach opportunities.

“Nothing is going to stop us from doing our very best in making sure we keep our elders (at home in our community),” stated campaign co-chair Walter Manitowabi in a press release.

Anyone seeking further information on the project should contact wltchcampaigninfo@gmail.com.