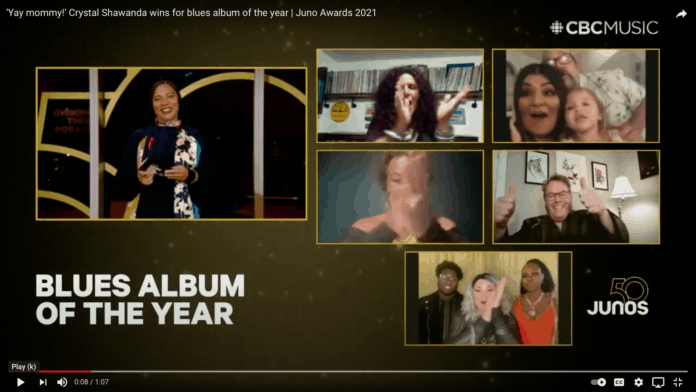 NASHVILLE, Tenn.—Wiikwemkoong kushkusgunaje (nightingale) Crystal Shawanda won the 2021 JUNO Award for Best Blues Album on the weekend and the reaction of her four-year-old daughter “yay, mommy, you won!” was captured in what has to be the perfect acceptance speech for the age of pandemic Zoom meetings.

Stop by The Expositor Facebook page to see what CBC has dubbed the Juno award for the ‘cutest moment of the year.’

A humble Ms. Shawanda admitted that she did not anticipate winning, and her ensuing scramble to unmute to deliver her acceptance would be familiar to most of those of us who have worked virtually this past year—you just can’t top that for authenticity. In fairness to Ms. Shawanda, her daughter did take up a bit of her speech time as she hugged mommy and adjusted her hair and she was just following her publicist’s instructions.

“I was so shocked,” laughed Ms. Shawanda. “It caught me completely off-guard, I really did not expect it. That’s why I just told our daughter Zsa-Zsa to come sit with me, I thought it would just be ‘nominated is Crystal Shawanda’ and then the camera would go to the winner. I was sitting there in my Cher T-shirt and was eating pizza and doughnuts just before it was our turn on camera.”

Ms. Shawanda was nominated for Blues Album of the Year for her album ‘Church House Blues’ and Indigenous Album of the Year, winning the former despite tough competition from Angel Forrest, Dionne Taylor, Samantha Martin and Delta Sugar, as well as Café in the Woods regular Rick Fines.

Ms. Shawanda was also nominated in the Indigenous Artist or Group of the Year, but that honour went to Leela Gilday for ‘North Star Calling.’

When the announcement of her win came, Ms. Shawanda dutifully scrambled to follow instructions. “I am all about doing what I am told by my publicist,” she laughed. The email she was sent told her to go to the media room should she win. “It didn’t say ‘after you say your thanks,’ then I was trying to get back in.”

“You would think that after a whole year of everything being on Zoom we would be old hands at it now,” she laughed.

Ms. Shawanda said that “just being in the same company with so many talented people I admire and respect was incredible. I am so grateful.”

The win comes as a very special validation for Ms. Shawanda, having switched from being a country artist to singing the blues.

“Everybody thought I was crazy,” she laughed. “They said I was ‘giving up’ my career, so receiving this attention for doing what I want to do is very affirming.”

Ms. Shawanda grew up in Wiikwemkoong and she credits her parents with teaching her to sing and play guitar and encouraging her to play country songs. She enjoyed a strong country music career, but having grown up in a home filled with the blues that were her oldest brother’s first love, she found herself drawn back to those roots. Ms. Shawanda was signed as a country artist to RCA Records in 2007 and produced a Top 20 hit on country radio, selling over 50,000 copies in the US, going Top 20 on Billboard’s Country Albums chart. So there was some foundation for the naysayers to latch onto when she switched to the blues.

Ms. Shawanda’s citation notes that despite her country music success, she felt “like a fish out of water.” A sentiment she reaffirmed in conversations with The Expositor. While she was on the road promoting her country album and visiting radio stations across North America, Ms. Shawanda wrote ‘The Whole World’s Got the Blues,’ inspired by the music of her youth.

‘Church House Blues’ is Ms. Shawanda’s fourth blues album. Her accomplishments include performing for then President Barack Obama and his wife during his 2013 Inauguration and she has served as a board member for Nike 7 for the past 11 years.

Ms. Shawanda is also a world class motivational speaker who speaks regularly to colleges, communities and reserves on the themes of “never giving up and truly believing in yourself.”

Her song ‘When It Comes To Love’ from her JUNO winning album also went to No. 1 on Indigenous Countdown and the album was Top 10 on the Living Blues Radio Chart in the United States.

As for a message to the folks back home, Ms. Shawanda said “I just want to thank everybody for all of their continued support and for sticking with me while I follow the path my heart is leading me.”