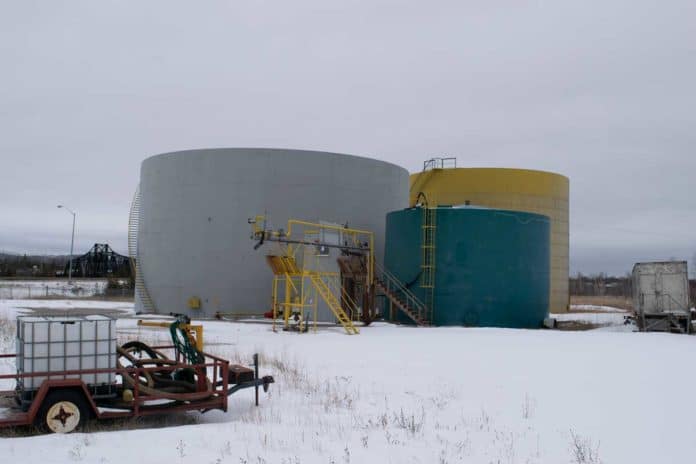 GOAT ISLAND—The trio of calcium tanks at the north side of the swing bridge on Goat Island, near Little Current, are slated to feature visual artwork in the future and an ad-hoc committee is seeking artist submissions for one or multiple potential tank designs.

“We’ve had lots of people asking about this for a long time. I had some free time and thought I’d take a look and see what we could do,” said Barb Baker, an entrepreneur and a Northeast Town councillor who first began the effort to beautify the industrial site.

She has initiated this project as the leader of Women of Manitoulin Entrepreneur Network.

So far, the working group on this file is made up of Ms. Baker, photographer Lamar Hyatt and muralist Monique Legault. Ms. Legault will be the official project lead on the art project.

The trio has also brought on an elder from Manitoulin to guide the process. Any Indigenous designs must come from someone with Indigenous heritage.

The group will publicize the request for artists and work with them to negotiate pricing and oversee the project through completion.

Pollard Highway Products Inc. owns and operates the three cylindrical holding tanks. They contain calcium, which arrives by barge, for road usage in an area that spans Northeastern Ontario from Mattawa to Sault Ste. Marie.

“I think it’s great and would be positive if we can work something out,” said Kevin Pollard, marketing manager at the highway company.

The art project is in its preliminary stages. In addition to the owners, the working group sought approval from the Ontario Ministry of Transportation because the project is located close to Ontario Highway 6.

Both Islanders and those from away were quick to register interest in taking on the painting duties; another individual mentioned that they may apply for a grant to make a documentary about the project.

The group also has to consider factors such as where condensation would surface on the tank, the material in the paint’s base coat and any areas that artists must avoid in the painting process.

Ms. Legault, in addition to serving on the committee, plans to suggest some designs as part of the process as well. Ms. Baker suggested that even if the art on the various tanks is different, the group may suggest a unified element on all three of the tanks.

The group will begin to fundraise in January and seek access to a mobile lift it can borrow for the artists.

It has formally opened submissions and will welcome those until February 28, 2021, by email or physical mail. A group of three finalists will receive a stipend of $150 to prepare drawing plans and a detailed budget, with the target for the first paint hitting the tanks in May 2021.

“I think, based on the interest we’ve seen, this is the way to go. The comments we’ve been getting are good so a lot of people are looking forward to it,” said Ms. Baker.

Murals can be divisive topics, such as the former hospital in Sudbury that received technicolour treatment (albeit in stages, after the artist was unable to complete the job in one go). Ms. Baker said the involvement of artists on the committee, including Ms. Legault who has an extensive mural portfolio, will hopefully ensure an attractive design that will be reflective of the peoples on Manitoulin Island.

“You’ll never get 100 percent of people happy with everything you do, but I haven’t heard many negative comments on the mural at the Mutchmor (in Providence Bay) so I’m hoping we’ll have the same levels of love and acceptance with this project. We’re hoping to do something really lovely and that people will be happy to say is part of Manitoulin,” she said.

The tanks are within a fenced area that will help to deter vandalism once the art is complete.

Further details on the project can be found at the Women of Manitoulin Entrepreneur Network social media or by emailing info@manitoulinwomen.ca.