ASSIGINACK – On October 6, Assiginack council passed a lengthy resolution decrying the federal government’s May amendments to laws on prohibited weapons.

The motion, moved by Councillor Dave McDowell and seconded by Councillor Rob Maguire, says, in part, that while the Township of Assiginack supports initiatives to end violence, it, “feels strongly that the Government of Canada is wasting valuable resources and taking the wrong approach to gun control that will have zero impact on gun crime.”

The resolution urges the federal government to “revoke the amendment and instead institute the following: target crime and focus on enforcement through enhanced enforcement capacity for law enforcement and border services, as well as harsher punishments for firearms trafficking and crimes involving firearms as the current ban targets law abiding owners rather than the holders of illicit firearms and would not greatly impact crime reduction; collect and share relevant data on crime involving firearms through improved collection and sharing of data on crimes involving firearms, particularly in terms of sources of illicit firearms, and also particularly in terms of sources and the types of crime being committed. This data is critical for supporting law enforcement and border agencies’ efforts as well as informing policy and legislation; and collaborate with the firearms community and industry to support communication, training and public education regarding firearms to create a multi-faceted approach rather than implementing a ban in isolation.”

Councillor McDowell told The Expositor he felt moved to do something on behalf of the Township of Assiginack following the law changes and so contacted the Canadian Coalition for Firearms Rights to see if they might have a ready-made resolution for municipal councils to adopt. They didn’t, but pointed to the City of Cold Lake, Alberta’s resolution, which Councillor McDowell used as the basis for Assiginack’s.

“What they are doing is not the answer,” the councillor said of the federal government’s May move. “It’s based on so many false facts … Automatic assault rifles were banned in the ‘70s. The descriptions make no sense.”

“We have a tremendous amount of hunting and farming on Manitoulin,” Councillor McDowell said. “We think some of these Northern Ontario, rural areas need to say ‘listen, we’re not the problem. You should be going after the smuggling and crime, not me’.” The councillor noted Nova Scotia gunman Gabriel Wortman and his cache of illegal guns used to kill 22 people and injure three more.

“Our gun laws are some of the strongest in the world,” he continued. “Everyone with a PAL (possession and acquisition licence) has their name run through a database daily. There’s no reasoning for what they’re trying to do. Spend the money where it needs to be spent.” 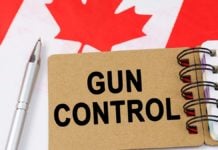