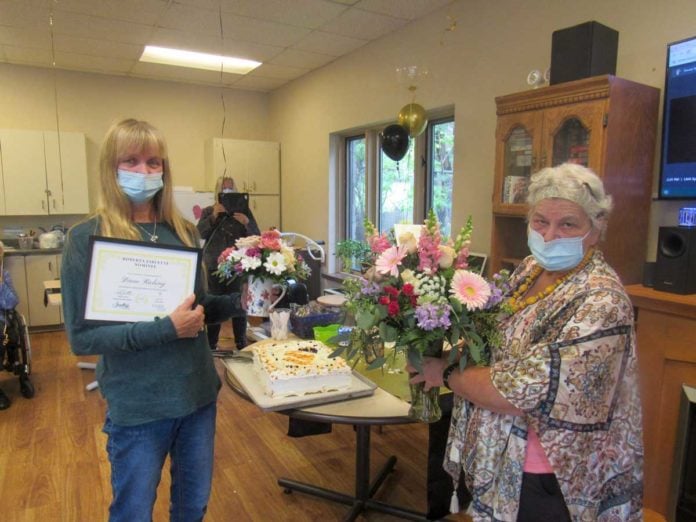 GORE BAY—Health Care Aid worker Diane Riching has been nominated by the Manitoulin Lodge Nursing Home in Gore Bay for a prestigious award.

A ceremony was held at the Lodge earlier this fall with nursing home staff and residents of the Lodge on hand as well as officials of Jarlette Health Services who attended via Zoom.

“Honoured guests, residents, staff, family and friends. Let me tell you a little about Diane and why she deserves the Roberta Jarlette Award,” said Gloria Hall, activities coordinator at the Lodge.

Ms. Riching was born in Cooksville, Ontario to Joe and Marie Foster, moving with her family to Manitoulin when she was 10 years old. She has three brothers and three sisters. Diane is the mother of four children, Jeffery, Scotty, Deanna and Shawn.

“Diane took the health care aide course and has always worked here at Manitoulin Lodge,” said Ms. Hall. “She is an incredibly hard worker, who puts her family first and that includes the dog, Sage.”

“Diane is very loyal, she has been employed here for over 40 years,” said Ms. Hall. “She is dependable and rarely calls in to say she can’t come to work. She is a good mentor for new staff. Diane is a great advocate for residents and staff. When she comes up with a problem, she usually has a possible solution. She supports new staff. Her years of experience show. She has joined many teams. No matter what is happening she remains positive.”

“Diane is practical, accountable and passionate and goes above and beyond to make sure her residents are taken care of with a high quality of care,” said Ms. Hall. “Perhaps Diane got her love of the elderly from her mother Marie who was a registered nurse here for many years.”

She told those on hand that a former staff member at the Lodge said, “Diane is quietly confident. She was wonderful to work with, always remaining calm and in control. She was my rock. I would say even calmer than her mother. She is even keeled. We worked together over 30 years. She is very stable. Diane sees the best in everybody. She isn’t much for joking around when there is work to be done, but she can be funny.”

“One word to describe Diane is efficient,” read Ms. Hall. “No matter what is thrown at her, every morning she manages to show up for breakfast on time. She proceeds to serve breakfast efficiently no matter what is going on. Even if she has to make the toast herself, serve up the cereal, and pour the liquids for residents. Things get done.

I remember one morning I came to work at 2:30 am and as the morning went on everyone from day shift called in sick except Diane. I was on break when she got to work. I told her downstairs before she got to the floor that it was just the two of us working. I was a bit panicky, and she was so laid back about it and said ‘we’ll get to breakfast when we get there.”

“I also know Diane cares very much about the residents,” read Ms. Hall. “If anyone needs something it magically appears, be it clothes, shampoo, shoes etc. She also takes new staff under her wing. She gets to know them personally and helps them out if she can. I have even heard that she will give venison to the new staff who have never tried it, if they wish.”

Ms. Hall continued, “One of the retired registered staff recalls that she would often put the med cart in the resident door while giving meds. Diane would suggest she move it. So, at first this nurse thought Diane was cross and grumpy; then something happened, and Diane gave her a hug. This changed the nurse’s opinion on Diane. Everything was good after that.”

“Diane not only deserves this award for all the little extras she does for her residents or for the love and care she gives them, but also for her patience and willingness to lend a helping hand to her co-workers,” continued Ms. Hall.

“She also advocates for resident rights, both those that can speak for themselves but especially for those who no longer have a voice. As for Diane’s co-workers, she is a strong voice to listen to when injustices are being aired,” read Ms. Hall.

“I have worked with Diane for almost 40 years of my career. She is not only a co-worker, but my best friend. She knows when I need to vent and listens without judgement; often we finish each other’s sentences and thoughts. Diane instinctively knows when I need a hand. She makes me laugh, grounds me when I get worked up and generally makes my day brighter. Thanks, Diane for making a difference in the lives of others.”

“Diane loves to travel. Her family is so proud of her,” said Ms. Hall. She noted, “besides working here, Diane also finds time to help out to ensure the Gore Bay Legion Branch 514 is a success. She has held many offices as well as organizes euchre games among other activities at the Legion.”

“It gives me great pleasure to present this Roberta Jarlette award to Diane. I am sure you all agree that she goes above and beyond for the residents as well as staff,” added Ms. Hall.