This past week has been troubling for The Expositor news crew. Thanks to a couple of press release crime reports from Island police services, a flurry of online comment descended upon our news staff, most of it from folks who either do not read the paper on a regular basis or whose perceptual screen only permits the negative to permeate.

Like any credible news outlet, The Expositor reports on crime and personal and community tragedy, local politics, provincial and federal politics that impacts Manitoulin communities. This paper endeavours to provide transparent and unbiased reporting to the very best of our ability in this process.

We also report on significant birthdays, the passage of notable members of the community, remarkable achievements of the many talented and creative people in the many and diverse communities across Manitoulin. Graduations, new businesses, community initiatives, health services, major construction projects and a host of other items of interest, none of which can be rationally characterized as “negative,” make up the vast preponderance of the items we publish each week.

We do not create the news, nor do we seek to paint any community in an unfavourable light.

Sometimes the news we report is read that way by individuals in various communities, and people try their best to shoot the messenger, as the old saying goes, but we carry on, to the very best of our ability—because as a free and independent member of the press, it is our duty, our vocation and our business to do so.

It is particularly distressing when individuals in positions to know first hand that we report on far more positive than negative events in their community suggest that we “have it in for them.”

“All you ever report is negative news” is too common a refrain often heard when the latest of editions hits the stands (digital or traditional). That is simply and demonstrably not the case. It is an accusation that is fundamentally unfair.

On any given week, The Expositor will be accused of being “an Indian paper” by those who yearn for the days of white dominance in “their paper” due to our coverage of events taking place on First Nation territory (which, by the way, make up nearly half of Manitoulin’s population and, in complete fairness, do tend to be the among most dynamic and proactive communities). Then, on the same day, in practically the same hour, this paper will find itself accused of racism, perhaps after a tribal police report has been published, or in response to some comment left below a reposting of a news article on Facebook made by an adherent of the former perspective.

It is an old newspaper adage which dictates that if both sides of a story are mad at you, you have probably done your job well. But there is also that admonition which reads “don’t shoot the messenger,” as noted above.

To those who think this paper is biased against any community, we issue this simple challenge: all editions of The Expositor are located at the Northeast Town library on microfilm. Instead of basing your assessment on social media diatribes about our coverage, we implore you to take the time to read a reasonable selection of papers and you will discover that assessment is simply wrong.

But beware, there is a condition known to journalists as “politician’s myopia,” in which a political figure (of any partisan stripe) can read an article containing a hundred positive items about them and only see the single negative reference in that article. The syndrome afflicts more than just politicians.

Should you disagree with something you find within the pages of this newspaper, take the time to set pen to paper, keys to keyboard or voice to phone and let us know how and why you disagree. We regularly publish letters to the editor that disagree with our editorial positions, or which take issue with how we covered a particular event or issue.

In the meantime, The Expositor will endeavour to provide all news that is of interest to all Island communities. If you think we aren’t, then let us know. 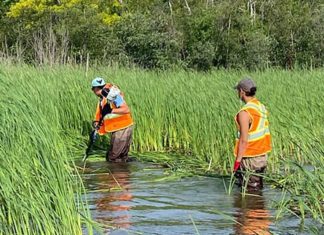