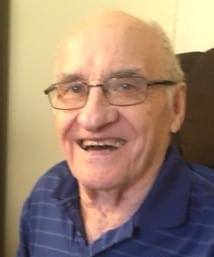 EDWARD EADIE
(TED)
On May 8, 2021, the day before his 91st birthday, our husband, father, grandfather and great-grandfather, Edward (Ted) Eadie, passed away peacefully. He will be remembered by his wife of 71 years, Lorraine (Freeman). Proud father of Everett (Verna), Barry (predeceased 1971), Darrell “Spike”, Jo-Anne (Michael) and Jack. Cherished by grandsons Ted (Megan), Chris (Meagan) and Phillip; granddaughters Casey, Jillian (Ben); and great-grandchildren Lukas, Leif, Fenway, Orin and Eden. He was predeceased by infant granddaughter, Michelle. Survived by siblings Ruby Chapman and Melvin Eadie. Predeceased by brothers Ross, Ivan, Jay, Orville and sisters Margaret Lonsberry, Kay Purvis and Joyce Brown. Uncle to many nieces and nephews. Early in his working career he worked for Buck Lumber in Little Current and for Don Eadie Construction. He then worked at the CPR coal docks. While working local jobs he was able to farm as a part-time operation. He cut hay on many town lots and ploughed and cultivated many gardens in town. He always had cattle, supplying the family with beef and milk. As full-time work became scarce, he decided to work for INCO. Being a proud Haweater he chose to travel five days a week to Crean Hill and then South Mine in Copper Cliff where he worked as a miner. Words are difficult to find the essence of the man so complicated yet so simple. He was simply the guy you sought if you needed help or comfort. Dad was fascinated by all things mechanical. A man of many talents, his skills ranged from engine repair to home construction. Truck needed a transmission rebuild-check that done 1968. Need a house built- did it in the late 60s building a new family home. If you needed help with a motor or a build- he was your go to guy. Many family members benefited from his skills as evidenced by new decks, new roof, siding or windows. He grew up part of the generation who believed that if something could not be fixed its parts might still serve a purpose. Many people visited “Ted’s Store” searching for a hard-to-find part and he usually had one or three. They also often sought his assistance with a motor or lawnmower and help was freely given. He spent many joyful hours in his garage tinkering with small engines and refurbishing bikes for the grandkids.
Grandchildren will remember large family dinners followed by rousing card games usually cribbage or euchre. He was a man who knew his way around a cribbage board and until the end remained an awesome crib player. Other memories include skidoo rides or tractor rides encircled in safe and loving arms, the guys fishing near the old ferry docks, the girls’ ice-fishing adventures/misadventures and searching for the ever-elusive morel. He was a grandkid whisperer. Cranky kids were rocked to sleep by him singing often songs he made up in the moment. The louder they yelled the louder he sang and it usually worked. Great-grandchildren were a treasure he fully embraced and they will remember the giddy glee as he chased them around the house laughing as loudly as they did. After a good chase, a snuggle in the easy boy and sometimes a snooze was welcomed by all. Although his journey in this world is done and he has gone to a well-deserved rest, his legacy will live on through the wonderful memories and love he shared so easily with all his family members. As his conversation often ended with a granddaughter love you, love you too, love you three, love you four…. We will all miss his smile, his jokes and his songs. The family are so appreciative of the care and support from Manitoulin Lodge and Oak Lodge during his final days. All staff was truly phenomenally compassionate. Dr Hayes and Dr Wilson provided excellent end of life care. Dr. Meikleham and Dr. Chau gave excellent care and support for Dad and the family as his health issues increased. Dad’s wishes were for cremation and no service. Arrangements were by Island Funeral Home in Little Current. If so desired, donations may be made to Gore Bay Manitoulin Lodge Auxiliary or the Angel Bus at Box 457, Gore Bay, ON P0P1H0.