MANITOULIN—The Manitoulin Expositor Salmon Classic has been growing in popularity with each passing year to where now, in its third year, the annual salmon and trout fishing derby has become one of Manitoulin’s most popular summer events.

One of the key reasons the event has proven so popular is the interactivity between the organizers of the event and its participants—with the the latter tweaking the derby’s rules and infrastructure to respond to the suggestions of participants.

“There are some exciting changes this year,” said Expositor Salmon Classic organizer Dave Patterson, “but one of the things we haven’t changed are the ticket prices—they will remain the same as last year.” (That’s $65 for adults and $35 for youth under 14.)

“The changes we have made are in response to what people have told us,” said Mr. Patterson. Those suggestions have come both through the annual survey of participants and interaction with those entering the derby.

“Some people were saying that the people who were coming in first, second and third in the derby were the same people who were also collecting the weekly prizes,” said Mr. Patterson. “So what we did was cut back the weekly prize to just one at the beginning of the derby. With the $3,000 that isn’t going out in the weekly prizes, we added to the daily. So now, instead of a $100 daily prize for the heaviest salmon or trout weighed in that day, there is now a $200 prize.” The change also means that if someone is only able to fish for a few days they have a good chance at a pretty decent prize on those fishing days. “So there will be more money and more opportunity,” said Mr. Patterson. Everybody will still be in line for the $12,000 top prize for the heaviest salmon.

Another exciting change this year is the prospect of a live leaderboard. “We are 95 percent sure we will be able to have a live leaderboard,” he said. “So when someone weighs in their fish, it will automatically go up on the board right away. That will help make it more exciting for everybody.”

There will also be a broader window for weighing in your entry. “Some select weigh stations will be open later,” said Mr. Patterson. “We found a lot of people like to stay out fishing as long as they can, but they were finding that the weigh stations were closed by the time they came in.” Not every station will be able to maintain the later hours, but most, if not all, of the busier ones will be remaining open to 10 pm. “It is all about trying to accommodate people more,” he said.

The call is going out to sponsors wishing to take part in this year’s Expositor Salmon Classic as well. “We have had amazing support from local sponsors,” said Mr. Patterson. Small wonder, as many Island accommodations suppliers are actually becoming dependant on the derby to attract business. “It’s great that this is helping to put money in the pockets of local businesses,” said Mr. Patterson. “That helps everybody in the end.”

Tickets can be purchased at The Expositor offices in Little Current, The Manitoulin West Recorder offices in Gore Bay, the Up Top Sports Shop in Mindemoya or online at fishmanitoulin.ca. For more information or even to add a suggestion for the Expositor Salmon Classic drop Dave a line at info@fishmanitouolin.com or by cell at 705-968-0237. 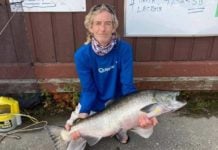 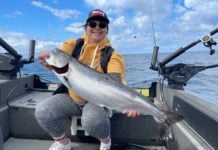