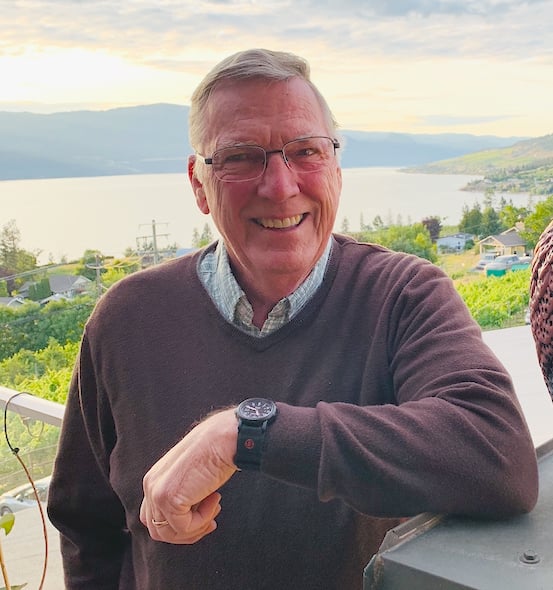 FRED NESBITT
January 6, 1942 – August 21, 2020
It is with sadness we announce that Frederick John Nesbitt passed away in his 78th year on August 21, 2020 in Enderby, British Columbia after a short battle with brain cancer. Throughout his battle Fred was lovingly cared for by Karen, his wife of 57 wonderful years. Fred was born on January 6, 1942 in Creighton Mines, Ontario to Betsy (nee Larson) and Andrew Nesbitt. Fred was a gentle, friendly man with an ever-present sense of humour. He loved to talk and laugh with family, friends, co-workers and the public. He devoted his working life to public service, starting in 1960 with the RCAF as an airman where he met the love of his life Karen (Fredrickson) in British Columbia in 1962. He left the RCAF but it never left his heart and he was a lifelong air force community member and a very proud veteran. Fred next joined the OPP in 1965 and served at the Dowling Detachment until joining the Sudbury Regional police in 1974. He served until 2001 when he and Karen retired and moved to Manitoulin Island where they resided for the next 18 years before moving to Karen’s home province of British Columbia in 2019. In retirement he was a volunteer driver for children in need, a volunteer with the Royal Canadian Navy Sea Cadets, he helped to establish ANAVETS in the Manitoulin region and he served on several local service boards. Fred is pre-deceased by his beautiful son Peter Paul also on August 21, 1969. He will be missed dearly by his sister Andrea Kelly (Paul-2019) and brothers Andrew (Sharon-2011) and Brian, his children Nancy (Guy Boucher), son Fred (Tara Fulop) grandchildren Nikki, Kyle, Kristopher, Zachary and Ethan and his numerous nieces, nephews, in-laws, friends and his “grand-dog” Will. We would like to thank the numerous friends and family who have so thoughtfully offered their thoughts and prayers over the past 6 months. A service will be held for Fred in Ontario after the current COVID pandemic. The family requests that if you wish to make a donation in memory of Fred that you consider the Brain Tumor Foundation in Canada.