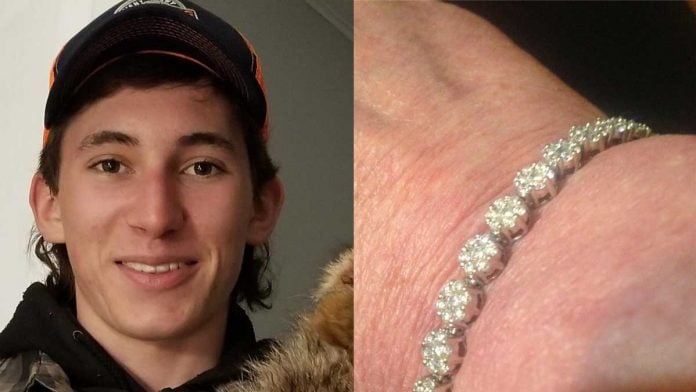 GORE BAY—It’s been a topsy-turvy world for a 16-year-old Gore Bay youth since the outbreak of the COVID-19 pandemic. First he lost his Manitoulin Transport dispatcher gig and then he was informed that his annual summer job on the Gore Bay docks was also on hold, so it was  about two weeks ago that Kyle Wood found himself undertaking odd jobs for people. One of those jobs was helping to clear up branches from some winter-damaged trees for Rupert Grigull and his wife Liz Hercun. Little did Kyle expect he would soon come across a bonafide lost treasure.

“Rupert Grigull had me doing some work on some trees that had come down over the winter,” said Kyle. “I looked down and saw something reflecting back the light under the sticks and trees. I picked it up and took it over and put it on the porch.”

“I came out onto the porch with a cup of coffee for Kyle when I looked down and there was a diamond bracelet just sitting on the porch,” she said. “I had been searching for it for about four months. Kyle said ‘yeah, I found it where the tree fell.’ This kid, bless his heart.”

She rarely wore the bracelet while on the Island, keeping it for special occasions. Although Ms. Hercun kept hoping she would find her lost piece of jewellery, she had finally come to the realization that it might never turn up. “I tore the house upside down,” she said, “trying to retrace my steps or think of where I might have lost it.”

The bracelet was quite expensive when it was purchased by her husband Rupert as a Christmas present in 2008, shortly after the couple had sold their store in 2007, but she admitted that she had no real idea of what it would cost to replace the piece today.

“We didn’t have the bill of sale, but I called the jeweller where my husband had bought it back in 2008 and they were able to go back in their records to provide an estimate,” she said. The answer pretty much knocked her off her feet. “I just about had a heart attack when they said $24,500. It has appreciated quite a bit since Rupert bought it.”

Her husband posted about the bracelet on Facebook and soon there were several hundred responses. “I said ‘way to go, did you put the address in too?’,” she laughed.

Needless to say, Kyle found a nice little bonus in his pay packet. The young man was grateful, but it was the reaction of Ms. Hercun that really made his day.

“She was so happy,” he said. “They told me it was pretty expensive.”

Kyle’s mother Ginger already had plenty of reasons to be proud of her son, considering the online accolades about his work ethic and polite adherence to physical distancing, but this latest example of his character provided a nice bit of topping. “We are very proud of him,” she said.

So is the rest of Manitoulin. Way to go, Kyle.