ASSIGINACK – Heather Jefkin’s Grade 3/4 class at Assiginack Public School might be small, but their willingness to spread some happiness is mighty.

Early in January, while her students were still learning from home, Ms. Jefkins said the news reports had her thinking about the loneliness that everyone is enduring because of the pandemic, especially those residents of long-term care (LTC) facilities.

Ms. Jefkins said her mind then turned to just how many LTC residents there are on Manitoulin and some research returned the figure of approximately 180.

With 14 kids in her class, the teacher then started to do the math: could they pump out enough Valentines for every LTC resident on Manitoulin?

When in-class teaching resumed on January 11, the teacher brought her idea to the attention of her class and challenged them to do it. They gladly accepted that challenge and for the next three weeks, the students happily created 180 Valentines. When the last one was counted Ms. Jefkins said they clapped and cheered.

During the process Ms. Jefkins said she and her class talked about the things those residents might be facing, such as loneliness and missing their families.

“Most of them know somebody who is in a LTC home, be it a grandma, grandpa, older aunts or uncles or a family friend,” she said. “We talked about how receiving a Valentine could be a boost to anybody.”

The Valentine project was also a chance for some other learning opportunities, like typing a letter and signing off—in cursive! Last week the class officially learned to write each letter of the alphabet in cursive. “They can now decode the secret language of adults!” Ms. Jefkins laughed.

Before the Valentines were delivered to each of the Island’s LTC facilities—Wikwemikong Nursing Home, Manitoulin Centennial Manor and Manitoulin Lodge—they sat for four days in a bin as a COVID-19 precaution.

Ms. Jefkins said she was teased by the class for worrying about Valentine’s Day in early January, but she wanted to make sure the Valentines could be delivered in a safe way so that they might be enjoyed on the special day.

“Life is tough enough right now,” Ms. Jefkins said. “We can do things where we don’t have to see the person’s face to know we’ve done them—it’s part of being good people.” 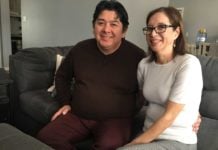