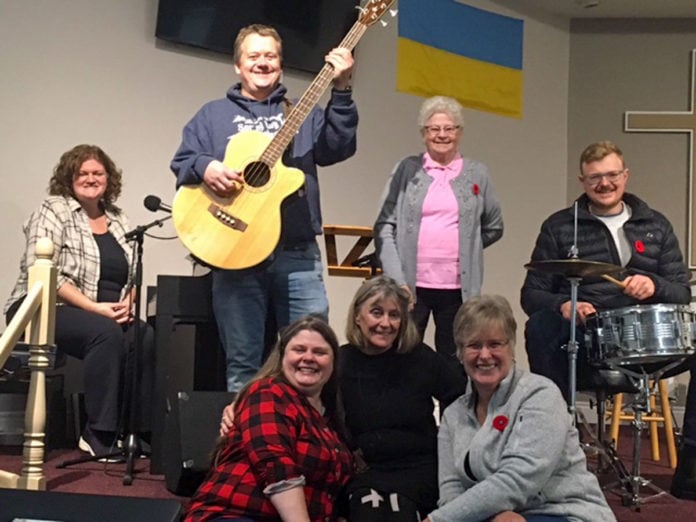 MANITOULIN—A group of musically talented clergy on Manitoulin Island are encouraging members of the public to attend a Christmas sing along concert taking place in November. The concert will benefit the Manitoulin Family Resources (MFR) food bank.

“This all started when we began brainstorming about things we could do to work together on at one of the ministerial meetings that we take part in every couple of months on the Island,” said Pastor Josh Wilhelm of Freshwater Community Church in Mindemoya. “We discovered we have a few musical pastors and decided to create a small band of pastors to have a Christmas sing-along.”

Pastor Wilhelm mentioned that Pastor Jamie Greenway (of Spring Bay Pentecostal Church) plays bass and Pastor Ramona Jaggard of the Manitoulin Community Church sings  and plays the piano. “I play the drums,” he said, noting, “we also recruited a fourth for our band, Pastor Jonathon Edralin of the Grace Bible Church in Little Current who plays guitar.” Rev. Janice Frane from the United Church in Western Manitoulin and Rev. Whitney Bruno from Little Current Church are also participating.

The band will lead what is hoped to be a big crowd on hand for the concert, while other Island pastors will be greeting members of the public in attendance and serving hot chocolate.

“We are hoping that a lot of people will come out and sing along with us, and blow the roof off the church,” stated Pastor Wilhelm. He pointed out no admission will be charged, although there will be a collection for the food bank. “We are doing this as a fundraiser for the MFR food bank hampers,” said Pastor Wilhelm. “We are hoping there will be a big crowd on hand.

“The sing-along concert will take place at the Freshwater Community Church on Sunday, November 27 at 6:30 pm.