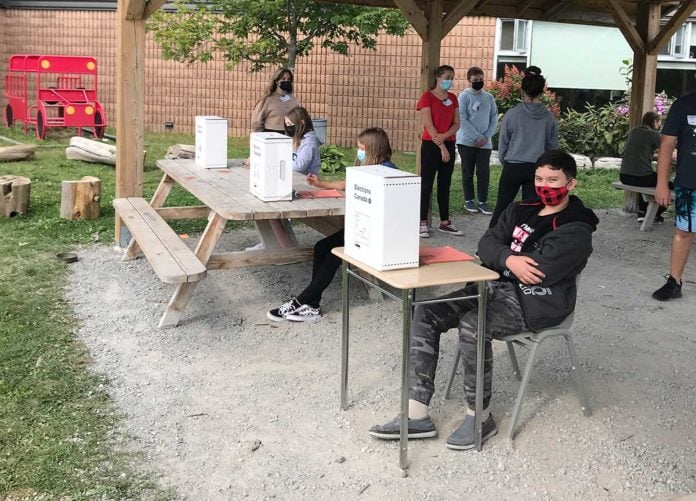 MANITOULIN – Many Manitoulin schools held mock elections on Election Day, all of which handily re-elected NDP incumbent Carol Hughes as their MP.

At Central Manitoulin Public School (CMPS), the Grade 8s polled the school for the most popular election issues, then wrote speeches that addressed the top four, explained teacher Margit Alberti. Those top four issues at CMPS were: climate change, health care, the environment and Indigenous relations, followed closely by housing and affordability, pharmacare and child care.

The eighth graders then gave speeches to the Grades 4, 5, 6 and 7 students to help them choose their candidate with a reminder refresher for the Grade 4s on Monday morning. The Grade 8s then officiated and counted the votes, which saw Ms. Hughes re-elected as MP with 31 votes followed by: Mr. Zimmermann, Green Party, 27; Mr. Sagman, Conservative Party, 13; Mr. Peltier, Liberal Party, 11; Mr. Jaaskelainen, People’s Party of Canada, five; and Mr. Baarda, Christian Heritage Party, four.

At Manitoulin Secondary School, 256 students cast ballots in its mock election, 12 of which were rejected and five of which were declared spoiled. Just like the rest of the riding, Mustangs voted for NDP incumbent Ms. Hughes to continue to be their MP with 117 votes, followed by the Liberal Party and Mr. Peltier with 70 votes, the Conservative Party and Mr. Sagman with 40 votes, Mr. Zimmermann and the Green Party with 12 votes, the People’s Party of Canada and Mr. Jaaskelainen with nine votes and the Christian Heritage Party and Mr. Baarda with five votes.

Lakeview School in M’Chigeeng also held a student vote, but The Expositor did not get the results by press time Monday.