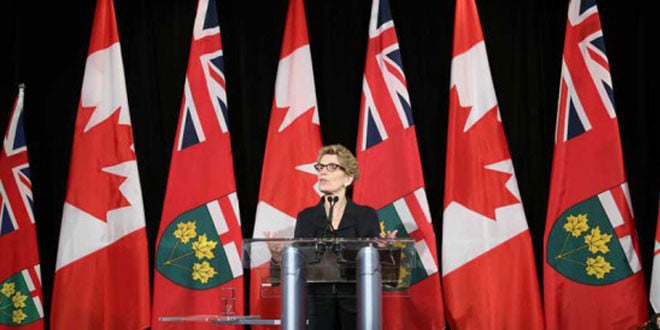 FORT FRANCES – Ontario Liberal Party Leader Kathleen Wynne has challenged the PC and NDP leaders to a debate that is specifically focused on Northern Ontario issues, if the other parties force a provincial election.

Wynne spoke with an audience of over 200 northern mayors, councillors, and business leaders at the Northwestern Ontario Municipal Association’s annual conference in Fort Frances on Thursday night. During her speech, Wynne focused on the importance of building partnerships and listening to local leaders as the government expands opportunity and builds security across the North.

“You know your communities better than anyone – you understand the unique needs and challenges that must be addressed. And your input has helped guide our vision for Ontario,” said Wynne.

As the government prepares to introduce a Budget on May 1 that includes the next steps in her plan for jobs and growth, Wynne put forward a direct challenge to both PC and NDP leaders at the end of her speech.

“I hope the other two parties do the right thing and support our budget. I hope they will put the public good ahead of their partisanship. But if the other parties don`t support this plan and instead send the province to an election, then I will call on the other party leaders to come to the North and discuss these issues at a Northern Leaders Debate,” Wynne stated.

In reaction to Wynne’s challenge, Sault Ste. Marie Liberal MPP David Orazietti said “A proposed Northern Leaders Debate demonstrates Premier Wynne’s ongoing commitment to ensure that Northern Ontario’s concerns are addressed. She has travelled to the North to meet with municipal and business leaders numerous times to make sure that Northern priorities and Northern economic growth are a critical part of our government’s plan.”

Liberal MPP for Thunder Bay-Atikokan Bill Mauro added that “Wynne held her first cabinet meeting in the North and has kept Northern issues front and centre in our government ever since. But the PCs and the NDP want to make the next election about Toronto subways. Kathleen Wynne wants to make the next election about the future of our province, and her vision for our future includes a thriving Northern Ontario and that is why she is committed to a northern debate.”

“Northerners have a clear choice – and that’s Kathleen Wynne’s steady plan for jobs and growth.  She wants Northern Ontario to reach its full potential, and the best way to do that is by talking about what matters most in Northern communities. The Northern Leaders Debate is a great way to have that discussion,” added Michael Gravelle, Liberal MPP for Thunder Bay-Superior North.