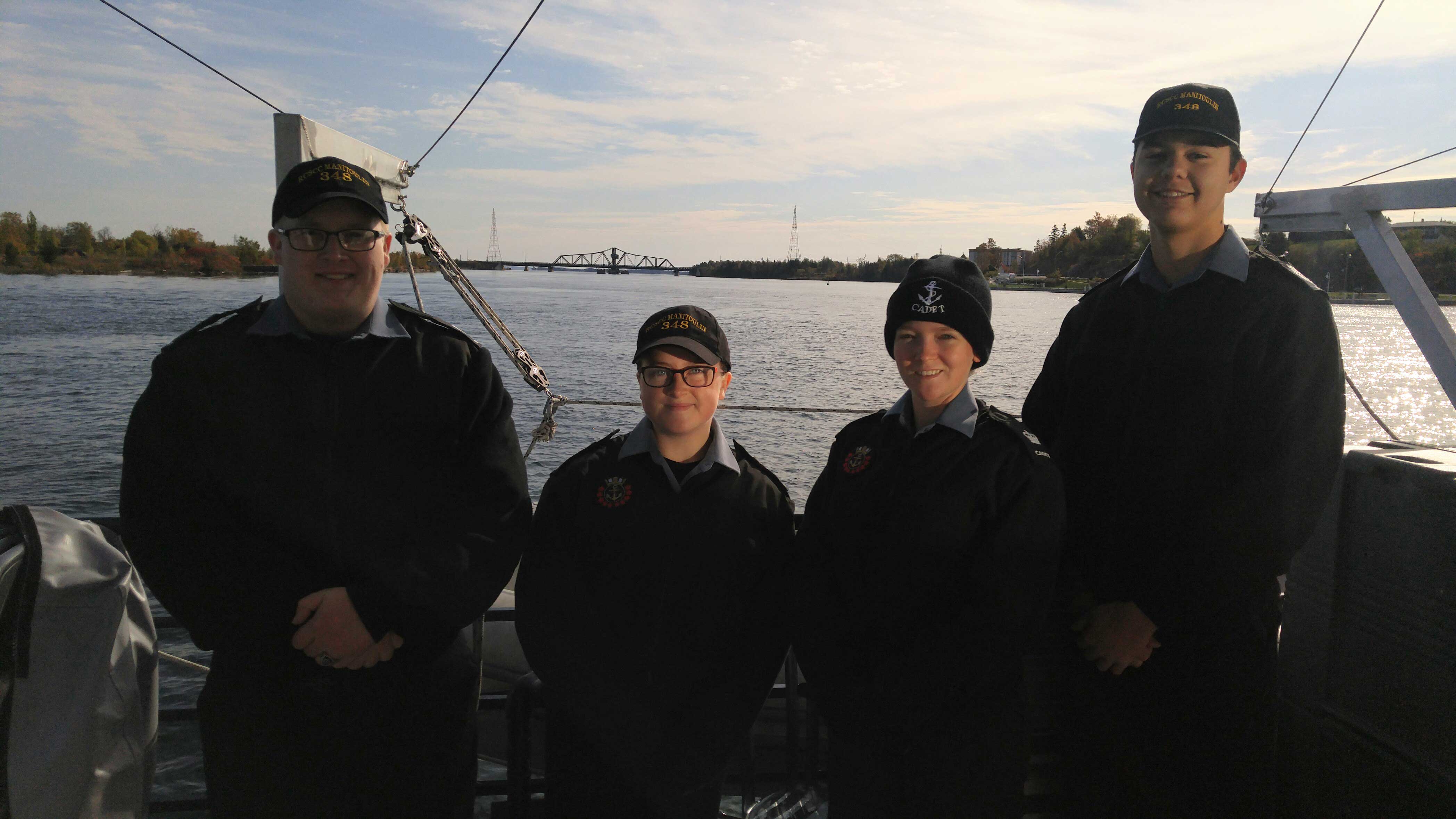 MANITOULIN—Members of the 348 Manitoulin Sea Cadet Corps had plenty of opportunities to keep busy (and earn a little coin at the same time) this past summer and early fall, as a number of the young cadets travelled to Canadian military bases across the country for training and instruction opportunities—and got a chance to helm North Channel Cruise Line’s Le Grand Heron this past fall.

The Expositor sat down with members of the corps to chat about their experiences.

Leading Seaman Ryan Goddard and Midshipman Lauren MacKay travelled to the Royal Military College at Kingston. “I went to camp in Kingston, at RMC, where I took general training,” said LS Goddard. “That’s sailing, marksmanship, range and stuff—lots of drills and ceremony.”

LS Goddard heard about the opportunities in the cadets from others in the corps. “People in our corps were talking about it,” he said. As it turned out, it was a lot of fun.

“RMC is turned into HMCS Ontario,” noted MS MacKay. “I underwent a three-week drill and command course. You learn a lot of leadership skills and, obviously, do a lot of drills, flag drills and field gun drills.”

“I was going to do sail,” said LS Goddard, but he found himself in drill. Sail turned out to be a lot of fun, however, although a bit risky. “First thing that happened was that Clayton got the boom in the back of the head.”

MS MacKay is planning on attending HMCS Ontario again next year, this time for the six-week drill and command instructor course. “You learn to be more in charge,” she said. “It qualifies you to be guard commander.” She agrees that she is a bit of a “take charge” kind of person.

“It has all been pretty fun,” said LS Goddard of joining the cadet corps. “The first few days it takes some getting used to, but it becomes a lot of fun.”

Staff Cadet Petty Officer 1st Class Miranda MacKay was at RMC, aka HMCS Ontario, as a staff member. “It’s kind of like a camp counsellor,” she smiled. “This was my fourth year there. I was teaching drill and command, a six week course and with the kids 24/7 as their counsellor.”

It was a paid gig. “I got $88 a day, seven days a week,” she said. This will probably be her last season, however. “It was pretty stressful,” she admits. But that isn’t the reason she is changing her summer plans, PO1 MacKay plans to pursue a career in nursing.

As part of the Manitoulin cadet’s orienteering team that also consisted of Dana Beauchamp and Morgan O’Brian, the Manitoulin Sea Cadet Corps came in third during the recent competitions in Sudbury. “There were probably 200 cadets there,” she said. “I did pretty well in the individual category as well. I think I came in third because I was right behind the girl who came in second (they only award first and second place).” The team will be competing in the next level of competition in Barrie.

In orienteering, you are given a map with a set of coordinates and you are scored on the number of check points you attain within a one-hour timeframe.

Petty Officer 2nd Class Nick Harper was deployed with the ORCAS, the old naval ships, and went to the Tall Ships Program run by the SALTs organization. He is applying for tall ships this March Break. He got the opportunity to travel to the naval base in Esquimault, BC where he helped crew the two-masted tall ships Pacific Grace and Pacific Swift. “The SALTs is a Christian organization,” said PO2 Wood. “Which was great because you didn’t have to be in uniform.”

PO2 Quentis Wood was deployed and spent the summer in Quadra where he studied as a shipwright, fibreglassing boats. “It is the most elite course of the sea cadets you can get,” he noted. “It used to be maritime engineering, but they got rid of that years ago.”

PO2 Wood was one of the group of cadets that had an opportunity to pilot the Le Grand Heron out of the Port of Little Current this fall. “We thought we would just be along as observers,” he said, “but we actually got to steer the ship.”

There are five different trades that cadets can go into, the cadets noted, including sailing, seamanship, music, drill and command and physical fitness instructor.

PO2 Harper is planning on going to college to become a hunting and fishing guide. “I can help people find a lot of good fishing spots,” he smiled. “I was also part of the rifle range team—it’s been winning every year since I joined cadets.” Coincidence? We think not. The Manitoulin team has won the competition for the past seven years. “One year we lost it, but we got it back the next year,” he said. “Manitoulin is really good for shooters,” agreed PO2 Wood.

Like a lot of cadets, PO2 Wood has his eye on going to school at RMC. “If I can get through school without any debt that would be pretty good,” he grinned. He intends to take weaponry officer. While that might at first blush seem like a non-civilian career path, PO2 Wood notes “that is the classification that eventually leads to captaining a ship.”

Leading Seaman Dayna Beauchamp (14) was also a member of the range team and Leading Seaman Morgan O’Brian (13) will be trying out this year.

LS Beauchamp went to camp this past summer, taking general training. “There were a lot of new things to learn, but you also make a lot of good friends. It showed us a lot of what cadets is all about.”

LS O’Brian enjoyed the orienteering competition. “It was fun,” she said, “but some people get lost in the bush. There were people following me and every time I looked back I could see them. I led one group around in circles,” she grinned. Although charting a path by map and compass was challenging, especially since her initial training on reading the compass was conducted indoors, she was up for the challenge.

LS Beauchamp holds down three jobs in addition to going to school, so there are not a lot of additional experiences she can fit into her schedule.

LS O’Brian said that she thought band “was amazing.”

LS Beauchamp is planning a career in the military, while LS O’Brian is contemplating a career in law enforcement, but she has a plan for cadets going forward. “As a cadet officer you can get into a good college with a scholarship.”

PO2 Samuel Clayton (15) will be taking up intermediate sailing. He has already completed two years of sailing “just for the fun of it.” He is hoping to go into the navy as an electrical engineer “or an engineer of some sort.” He enjoys cadets because “you get to meet new people, get to learn how to lead and think about your future. Cadets learn to know what they want and this is a good place to get into the trades. They teach you a lot of respect for people.” The opportunity to win awards for outstanding performance don’t hurt either, he notes. “They look really good on your resume.”

PO2 Abbie Harper took intermediate musician in Kingston. Does she have a favourite instrument? “Yeah, trumpet,” she supplies without hesitation. “I actually learned how to play a bit before.” She made a lot of friends while at camp and, in this age of digital communication, they all still stay in touch. PO2 Harper also has her eye on the opportunity for scholarships. “You can get up to $2,000,” she grins, and the pay for cadet trainers isn’t too shabby a summer job either. “POs get from $85 to $100 a day. I can’t wait.”

Learning to work with a lot of different people is also a very valuable skill to acquire. “That was so much fun,” she said. “The instructors here make it really interesting too. You aren’t stuck inside all the time. Getting outside and doing stuff is a lot of fun.”