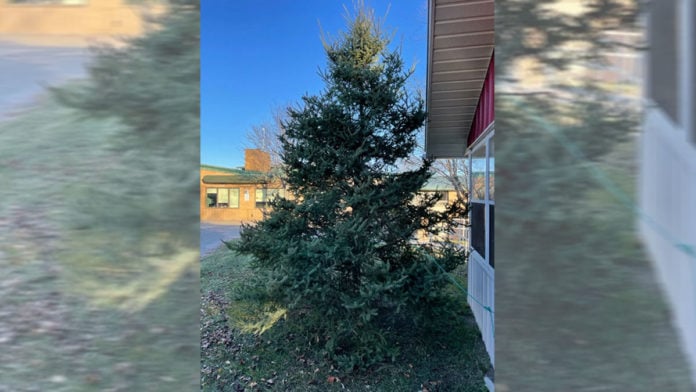 LITTLE CURRENT—One of the Island’s favourite fundraising campaigns has returned to the Christmas hustings as Manitoulin Centennial Manor is once more igniting its Tree of Lights, despite the challenges of being down a fundraiser since the retirement of the incomparable Wendy Gauthier.

“Peggy (Pridham Smith) and I have taken it on for this year,” said Manor administrator Don Cook. “We don’t want to lose the momentum Tree of Lights has built up over the past few years.”

Mr. Cook noted that momentum has led to significant improvements in the lives of Manor residents. “It really has done a lot to improve residents’ lives,” he said. “Before I came on board they replaced all the carpeting with non-skid flooring.” That improvement was a major boon to those residents confined to wheelchairs or utilizing walkers to get around. “It helped with mobility big time.”

Although the Manor courtyard project has a major benefactor propelling construction progress, the Tree of Lights campaign has done its part as well, providing the seed money to get the ball rolling on the project. “Then the benefactors stepped up to help complete the project,” said Mr. Cook, who remained tight-lipped when it came to the identity of the benefactors who have not yet agreed to be identified. The courtyard project that will provide an amazing space for residents and their families to gather outside is on winter hiatus, with construction anticipated to be completed in the spring.

The Manor dining room renovations are nearly complete, with new tables and chairs, cutlery and dishes part of the complete renovation. Some of the new tables are designed for the comfort of residents in wheelchairs. “Each table can be a different height,” explained Mr. Cook. “The tables are adjustable for each person’s wheelchair height.”

The kickoff advertisement for the campaign was in last week’s edition of The Expositor with a photo of the unlit tree. “Our plan is to light up the tree from the bottom as donations come in and post a photograph for people to see the progress being made in the campaign,” said Mr. Cook. “We have quite a number of donations coming in already—it’s starting out quite well.”