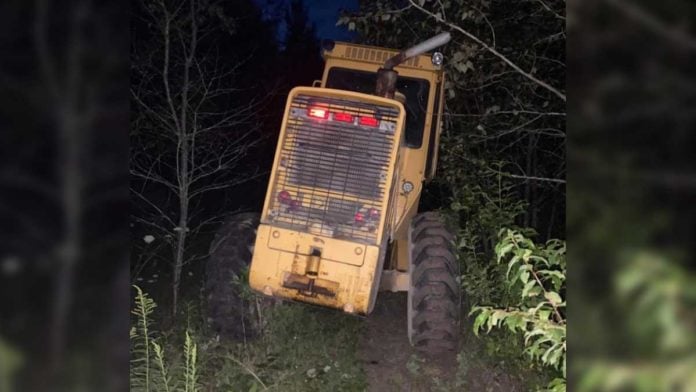 M’CHIGEENG—On August 7, at 8:05 pm, United Chiefs and Councils of Manitoulin Anishnaabe Police Services (UCCM APS) officers arrived on scene and observed a male attempting to tow a pickup truck out of a ditch on Highway 551 near Lakeview Drive in M’Chigeeng.

Witnesses were able to identify the driver of the truck to police. The driver of the truck previously attended the Bayview Pizza Store on Hwy 551, spinning out and causing damage to the lawn. The vehicle then turned onto Hwy 551 where it went into the northbound ditch. Upon police arrival, the driver fled on foot from the scene and when approached, again fled from UCCM and Ontario Provincial Police officers.

At 9:20 pm, witnesses attended the UCCM Police detachment and advised that there was a large front-end loader near Mnaawnkwad Drive that was missing a rear tire and was going through the residential neighbourhood known as Pinewood Park, knocking down trees and going through yards.

UCCM APS officers attended the area immediately and observed damage to the asphalt on the roads where the damaged front-end loader had been driving. Officers activated emergency lights and equipment and the driver refused to stop for police.

It was clear the front-end loader had to be stopped immediately due to the imminent threat to public safety and to prevent further large-scale property damage. The loader then entered into the back yard of a residence on Pine Street, narrowly missing a house with residents inside.

The driver fled from the loader on foot and was pursued by officers. The male was identified as the same male from the earlier occurrence with the pickup truck. Officers entered the loader, took it out of gear and turned the machine off as it had been abandoned while still in gear.

The male fled to a residence on Riverside Drive where he was pursued inside by UCCM officers. The male took an assaultive position towards officers and a conductive energy weapon was displayed to gain compliance. The male continued to actively resist and had to be taken to the ground by officers in order to gain compliance and be arrested.

The accused was later released by way of an undertaking to appear with a first appearance court date of September 15 at 10 am.

UCCM APS would like to thank all the witnesses who came forward and provided information which assisted greatly in identifying and apprehending the accused party in this case. Damage to the front-end loader, buildings, roads and yards is estimated to be over $50,000 at the present time. This was an extremely dangerous situation that could have ended tragically, but thankfully was resolved without anyone getting seriously hurt.

UCCM APS are asking for the public’s further assistance with this incident for video and/or further information regarding damage that has yet to be located and documented by police investigators. If anyone has further information regarding this incident, please contact UCCM Police at 705-377-7135 or Sudbury Rainbow Crime Stoppers at 705-222-TIPS (8477) or 1-800-222-TIPS (8477) or submit an online tip at www.sudburycrimestoppers.com.