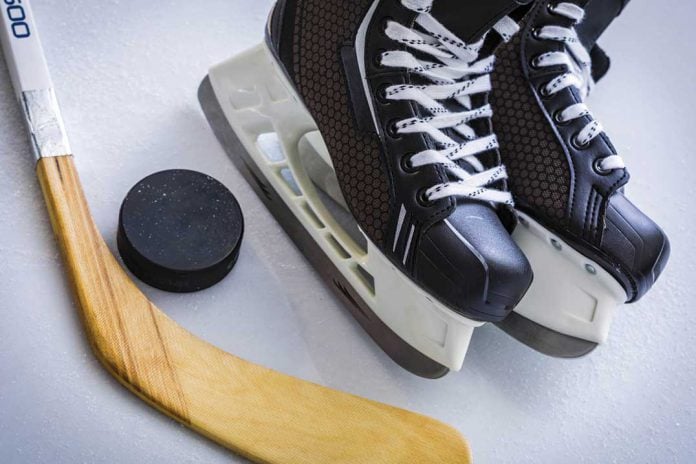 “We beat Espanola 3-1 today,” said MSS coach Mike Meeker on Monday. “Espanola is a strong team and we had to play well to win.” The game Monday was in Espanola, and followed up a Mustangs win last week, again 3-1 on the road, against St. Benedict’s.

“I thought St. Ben’s would be one of the teams that would give us the most trouble,” Mr. Meeker said. “Especially playing on the road and the game being at the Countryside Arena, with its large ice surface.
We started off slow in the first half of the first period but after that we outplayed and outshot them.”

“The girls are really playing well,” continued Mr. Meeker. “And I can’t get over how well our young players are playing. They certainly aren’t playing like rookies.”

“This team has a lot of fun and they get along very well,” said Mr. Meeker.

The Mustangs have won their first four games of the season and were scheduled to play St. Benedict’s in a game in M’Chigeeng this past Thursday.

The MSS Mustangs boys’ team beat the Lively Hawks this past Monday, 6-1 to get to .500 on their regular season thus far.

The Mustangs ran out a huge 4-1 lead after the first period and added two markers in the second frame to lead 6-1 in a game played in Lively.

Scoring for the Mustangs was Noah Hare with a pair of goals, with singles going to Jalon Waindubence, Eric Varey, Jayden Little and Johnny Bushey.

“Through the first five games of the season we have a 500 record, two wins, two losses and a tie,” said MSS coach Steve Doane. “We are sitting in the middle of the pack (in the league standings) with five points. St. Charles leads with a perfect 5 and 0 record to date.” He pointed out the Mustangs played in the Cardinal Classic tournament in Lively and “were disappointed with a 1 and 3 record. We won our first game 3-1 against Lively but were manhandled in the first 10 minutes of the game against Confederation. The boys eventually came to life but it was too late and we ended up losing that game 6-3. Close losses to St. Ben’s and Bishop Carter ended our tournament hopes.”

Mr. Doane said, “the boys are coming along in most areas but as a team we are simply giving up too many goals. The goaltenders have been playing well but two on one chances are really hurting us against the more skilled teams.”

“The next four games, all against top teams, will pretty much determine our season,” said Mr. Doane, explaining that L’Horizon has only given up six goals on the season, then MSS plays first place St. Charles, bruising Confederation and second place Lo Ellen. “If we can keep the puck out of our net and the scores low then we will have a chance, but if we think that we are going to give up three or more goals against those teams and still win then we are dreaming.”