This is going to be a once upon a time tale (or is it tail?) with a hopefully happy ever ending. So, as we humans begin our late fall hibernation, settle in, get cozy and enjoy this story about a little porcupine called Sarah Juniper.

Our story begins on a weeknight in Kagawong when Sarah Oliver’s wonderful dog Buddy began barking incessantly at something in the backyard. Alerted, Sarah went to see what the commotion was about. Lo and behold, it was a porcupine stuck in some plastic fencing. Brave Sarah carefully cut and freed the plastic fencing from this little gal but then noticed more wire mangled amongst the quills/guard hairs. That’s when she decided it was time to call for more help knowing that an animal with wire wrapped around it would surely enough get entrapped and suffer a poor demise. Enter Bleu Fisher of Rainbow Rescue. This is where I quote Sarah as I loved her description of this narrative. “She replied quickly and told me she’d be right there. While waiting for our hero Bleu, Sarah Juniper decided to climb the cedar tree, but she remained on a low bough until Bleu arrived. When Bleu arrived she might as well have had a cape as she flew to the rescue sure and confident as could be. She worked her magic as she bushwhacked through the thick cedars sure-footed and focused, trying to catch the little gal and get her into the cage. That was a sight to see.”

A quick side note: Since Walden’s Wild at Heart Animal Rehabilitation closed down in 2019 because of financial reasons, any wildlife on Manitoulin in need of help has fallen into the hands of good Samaritans, and Bleu Fisher has taken on the gauntlet to help these animals out, along with her usual numerous cat and dog rescues. From there, Bleu and other wonderful volunteers will direct these animals to the appropriate sanctuaries with training in wildlife rehabilitation, such as Turtle Pond of Sudbury and Aspen Wildlife Sanctuary in Rosseau.

However, Sarah Juniper (as we came to call her) needed a pit stop first. She was in some medical distress and as it was now late evening, Bleu contacted the Island Animal Hospital where Dr. Johanne Paquet and her husband Steve Fisher received her. This was a first for the hospital as the usual after hour calls are often of the canine kind with muzzles and mouths full of porcupine quills—never an intact porcupine itself needing medical care. Dr. Paquet quickly learned a few tips for handling the prickly kind. First, do everything carefully! Second, don’t wrap a porcupine in a blanket as it pulls out the quills and our poor little Sarah Juniper already had a denuded back from being stuck in the plastic fence. Thirdly, thick, long-sleeved gloves that are used on angry cats are best for porcupine beasties. Finally, sedation is always needed if you wish to do any detailed exam and thus after an intramuscular injection, Sarah Juniper was soon dreaming about chewing plywood. It was discovered that our porcupine had a deep wound to her chest and more shallow wounds around her chest where the plastic fence had cut through while she was trying to free herself. She received an antibiotic injection and the wounds were cleaned and treated with medical honey. She woke up later that evening in a comfortable dog run where she was to have a sleepover until discussions were had about where to release or place her.

During this interlude, the staff at Island Animal Hospital discovered some interesting facts about porcupines. The most obvious was that they do have quite an interesting aroma. It is a strong odour to warn away predators which can increase when agitated. The smell has been described as similar to strong human body odour, goats or some cheeses. The odour is generated by a patch of skin called the rosette on the lower back. Being an herbivore, we discovered that our little friend liked carrot tops and raw squash. We discovered also how powerful their iron oxide-stained incisors are when she chomped into a thick carrot, which explains how, like the beaver, they can chew twigs and bark. Being a solitary and shy creature, Sarah Juniper gave a little startled adorable cry like a baby when we handled her to apply honey to her wounds. And she never once quilled any human as porcupines are very slow moving, non-aggressive and they don’t throw their quills. Quills, which are modified hairs, only get embedded into flesh when an attacker grabs or touches the porcupine. Sarah Juniper was the model of a very good patient!

It was then decided, however that Sarah Juniper could not be released into the wild right away due to the excessive loss of quills on her back side and the chest wounds. So, a winter layover and rehabilitation at the Aspen Wildlife Sanctuary was needed. Situated in Muskoka, Aspen Valley Wildlife Sanctuary is a 460-acre sanctuary of natural habitat and has been in operation for 40 years. Their primary mandate is to rehabilitate wild animals who find their way to them so that they can eventually be returned to their natural habitat. Check out their website, they have done and continue to do incredible work and are always in need of donations as they do not receive any government funding.

So, on an early Saturday morning, Sarah Juniper was loaded up into my car—the final chapter of this saga. With a privacy blanket draped over her cage, she quietly chewed on a squash listening to classical music for the entire 4.5-hour trip. She was safely delivered into the hands of the animal health technician and volunteers at the sanctuary where they will continue to use my bees’ honey on her wounds and nurse her over the winter until she is released in the spring. Stay tuned—she shall return! And to all the ‘caped’ heroes of this story, a big thank you. Here on Manitoulin, we live in close proximity to wildlife and to be good stewards of this earth, we need to look after them as well.

EDITOR’S NOTE: Dr. Janice Mitchell is a veterinarian with Island Animal Hospital and Little Current Veterinary Services, and she’s a beekeeper too! 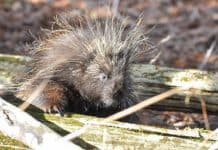