The two-day conference, which is organized annually through the Wikwemikong Development Commission (Operating as Enaadmaagehjik), welcomed over 100 participants and featured over 20 guest speakers, presenters and panelists who engaged conference participants in a variety of topics including the importance of sports, healthy living and leadership.

Both days began with a sunrise ceremony, followed by a number of presentations, panel discussions, and workshop activities including free expression painting with local artist Santana Eshkawkogan and a lacrosse skills demonstration and participant game with Wiikwemkoong’s Jeff Shattler.

Mr. Shattler, a professional lacrosse player with the Saskatchewan Rush in the National Lacrosse League, was one of the conference’s keynote speakers. He has recently begun visiting different reserves to spread awareness of the game of lacrosse, including its history, its cultural significance to First Nations and the opportunities that playing lacrosse can provide. In his talk, he discussed the importance of “choosing the right crowd” and respecting elders as well as exploring options such as scholarships and grants to pursue goals. He also provided game basics including picking up the ball and stick handling. He said he was happy to be able to come home to provide this experience to his community’s youth and looks forward to coming back.

Mr. Shattler was joined at the conference by his sister, Kelly Babstock, who is also a professional athlete. Ms. Babstock, a two-time National Women’s Hockey League (NWHL) All-Star who has just recently been signed to the NWHL’s Buffalo Beauts, was also happy to come home to be a part of the youth conference, which she sees as a way of giving back to her community. She felt it was important to share with the youth, who she describes as “our future,” the importance of school, staying active, as well as her story of the opportunities that being involved in sports can lead to. 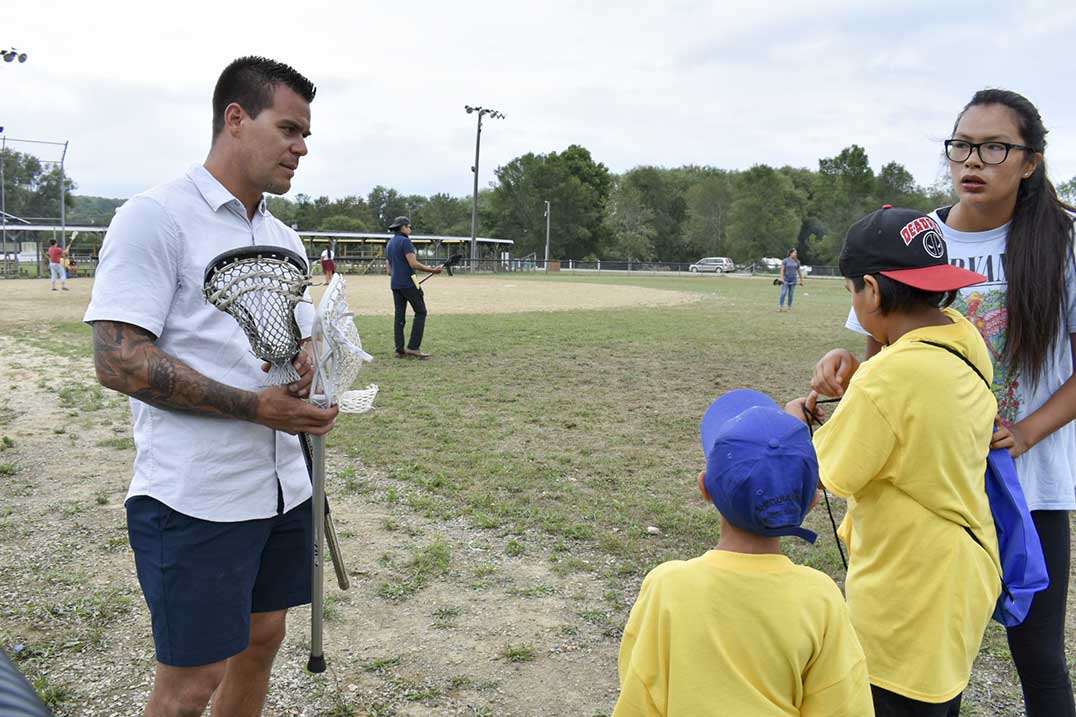 Former NHLer Stan Jonathan, most notable for his time with the Boston Bruins was joined by his daughter Brandi and grandchildren Ronni and Cruz in a presentation titled ‘A Successful Start for Upcoming Generations,’ in which they spoke about the importance of family, education, and community supports. Mr. Jonathan encouraged the youth to go beyond their own community and to not be afraid to see the world outside of the reserve.

Recently elected Ontario Regional Chief RoseAnne Archibald also attended the conference giving a keynote address to the youth, which she later posted about on Facebook in which she expressed gratitude for the opportunity to share her “leadership story with these beautiful and amazing young leaders.” She wrote that spending time with the youth always energizes her and gives her great hope that the future is secure.

Conference participant Mgisinii Wemigwans said he enjoyed the conference, and in particular found the talk from the Chief of Police and the Director of Operations, in which they encouraged the youth to meet with their elders, especially motivating.

The conference kicked off with a screening of ‘Indian Horse’ at the Wikwemikong Arena on August 7 at which over 150 people from around Manitoulin Island attended. Evening activities on August 8 included a Debahjehmuhjig show and Thunderfest evening concert with NS3 and Elijah and the Backburners.