LITTLE CURRENT – At the tender age of 12, Quentis Wood of Little Current enrolled with the Royal Canadian Sea Cadet Corps (RCSCC) 348 Manitoulin. Six years later, his rank now boatswain (“bosun” in Navy parlance) with the corps, Quentis aged out of the program and two days later, was sworn in as a member of the Royal Canadian Navy.

Quentis said he first heard of the Sea Cadets through his parents, who had seen their good deeds in the community. He also had a few friends from school who had joined the cadet ranks.

“I joined and I guess you could say I fell in love with it,” he tells The Expositor.

During RCSCC 348’s annual review held over Zoom on May 31, Boatswain Wood was gifted with the official aging out (cadets ‘age out’ at age 18) gift of the corps—a pewter mug. As was explained by past commanding officer Lt (N) Denis Blake, the mug is meant to give the cadets one of their first tastes of adulthood in that their first official legal drink at 19 should come from this special mug.

“Cadets gave me the opportunity to travel and offered me lessons and courses in things I liked doing,” Quentis shares, noting that he received his pleasure craft operator’s licence for free, while in Kingston—all perks of being a cadet. “You get paid (there are summer opportunities at camps across the country where cadets will be paid for their work with junior cadets), learn for free and travel; there really are no downsides.”

Each summer (with last year the exception for obvious reasons) Quentis has attended summer camps, either as a cadet or a staff cadet. One of his most memorable experiences was nine days at HMCS Quadra in Comox, BC. There he helmed an orca-class patrol vessel and became officially certified as a boatswain. And BC is where he’ll fly to begin his basic training at Canadian Forces Base Esquimault on Vancouver Island.

Quentis says he’s always had an interest in military history and the military itself, so the jump to enlist with the navy wasn’t a big one for him. “The military was always on my mind,” he adds.

Plus, the young man loves being on the water—a fitting thing for a Haweater.

Quentis applied to the navy in December and by February had an aptitude test. A few weeks later he had an interview and medical at the Sudbury recruitment centre. In the last month, he was offered the role of boatswain.

For the uninitiated, boatswains are “seamanship specialists” and are truly the professional sailor. According to the Government of Canada’s website, boatswains: operate and maintain shipboard equipment associated with cargo handling and inter-ship transfers of personnel, fuel, and materiel while at sea; operate and maintain the ship’s equipment for such tasks as anchoring, towing, launching and recovering boats, and surface rescue operations; operate and navigate small craft in all waters; perform required tasks with ship’s rigging and lifesaving equipment; organize the storage, training, and use of small arms, demolitions and ammunition; plan, organize and conduct drill and ceremonies; assist and supervise deck crews in maintaining the ship and its equipment; and coordinate watch keeping duties at sea and in harbour.

“We’re pretty much jack-of-all-trades,” Quentis sums it up.

Once he completes his basic training, he moves on to environmental training, then occupation training. After that, it’s time to be posted.

“I’m going to get through my four-year enlistment and see where it takes me,” he explains, be it a further career as a boatswain, a naval officer “or maybe something entirely different.”

His experience as a cadet will give him a bit of a leg up as he heads to BC. He knows the rules around dress and deportment, terminology and even how to properly iron a uniform.

“Cadets isn’t for everyone, but I encourage people to try it, even for just a little while,” Quentis says. “It (cadets) covers a lot of stuff—there’s instruments for the band, drills if you’re into that, seamanship if you love the water like I do, or even sailing—it’s really fun going out on the water.”

Ever pragmatic, Quentis is looking forward to the perks of his new job—travelling the world while earning a paycheque. Meanwhile, he’s preparing for what he anticipates to be a grueling few weeks of basic training, running five kilometre stretches, hitting the gym, and taking all the advice he can get from those who have enlisted before him.

May you have fair winds and following seas, Quentis.

The formal (via Zoom lately) weekly parade nights for Manitoulin Sea Cadet Corps 348 wound up for the summer with a virtual Annual Review on Monday night, May 31. For any young person, or their family, interested in entering the Island’s Sea Cadets program in September, you can contact the Corps Commanding Officer, Lieutenant (N) Sylvain Boucher at 348rcscc@gmail.com to make enquiries. 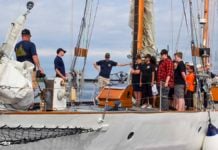